Today has been a pretty quiet day. There was not much happening on the work front just a return to complete and a couple of phone calls. So the majority of my day was spent online buying birthday presents as I have at least 4...or is it 5...birthdays coming up in the next couple of weeks! May is a busy month!

Despite another grey day we ventured out at lunchtime and are now pretty consistent in our 2 miles done in 39 minutes. It started to rain a little on the way back and I did comment that this time last week I was in shorts and a t-shirt while today the winter coat was back out and I had gloves on!

I was reminded this morning through Facebook memories that three years ago we took part in our first Star Wars Weekend at Legoland Windsor. This was an event held over the closest weekend to May 4th...because that's the official Star Wars day (May the 4th be with you!!!) and involved multiple costuming groups held over three days.

Back in 2017 we attended just one of the days as part of the Mandalorian Mercs, representing the UK clan know as the Vok'Chi. The event organised by Legoland involved Star Wars costuming groups from across the UK who provided screen accurate characters to roam their park and take part in daily parades as part of a weekend devoted to all things Star Wars. In return for the costuming groups donating their time Legoland donated £15,000 to a childrens hospice called Alexander Devine.

It was a great event and we met lots of people which ultimately resulted in our joining another costuming group called Joker Squad which enabled Simon to create his Stormtrooper and me to become Governor Pryce.

Here are a couple of photos from our first Legoland event back in 2017; 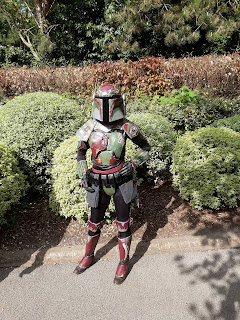 It was a fun and tiring day full of high fives, smiles and photos and a fantastic opportunity to help raise money for a very worthwhile cause.

The rest of today was spent doing a little more on my jigsaw followed by a home workout; Simon and Molly down the gym again with me doing a few kettle bell moves!