So what else did we get up to on day 3 of our Disneyland Paris trip?

Well, after a morning in Disneyland Park we headed over to Walt Disney Studios for the first time this trip. 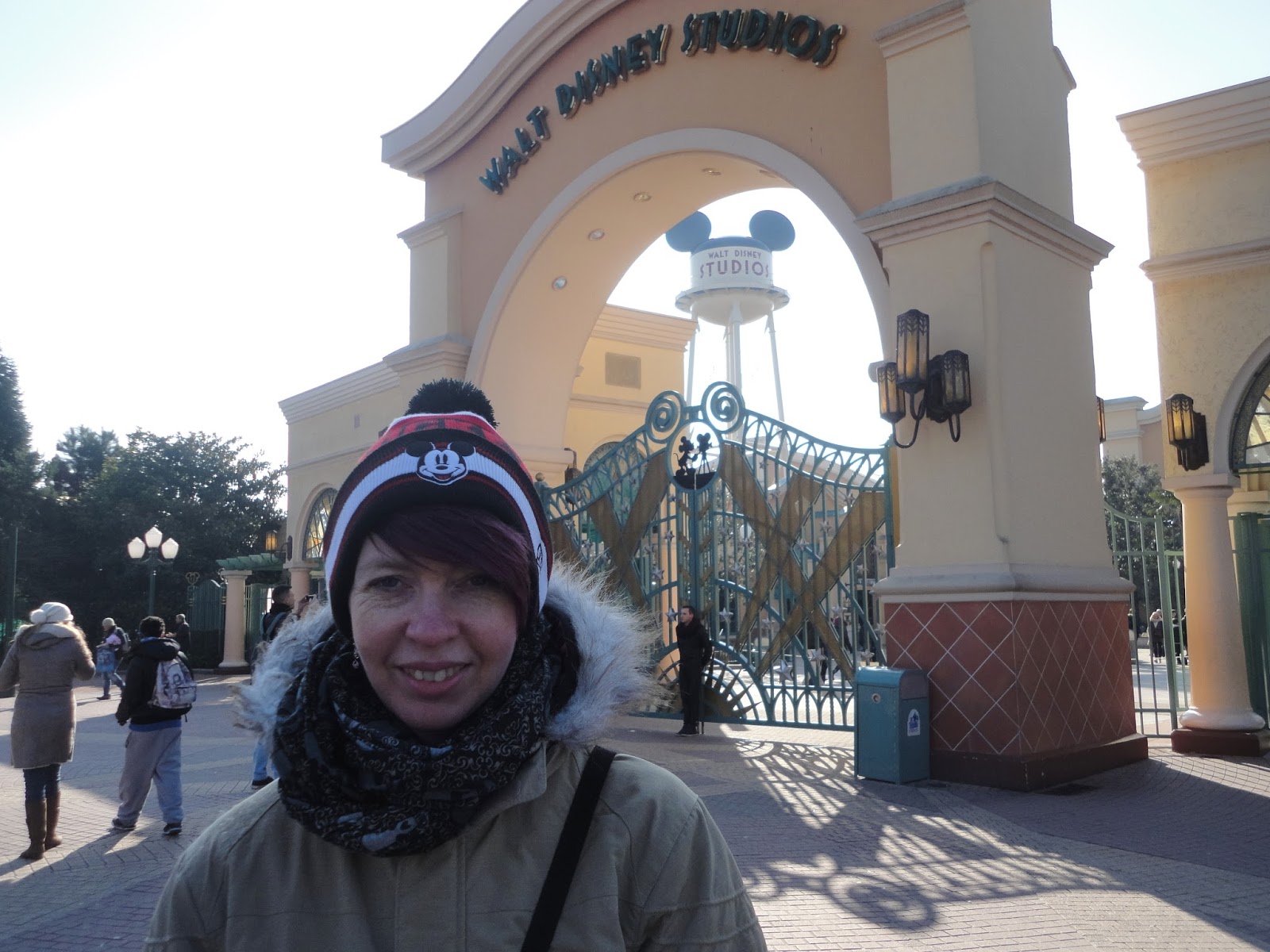 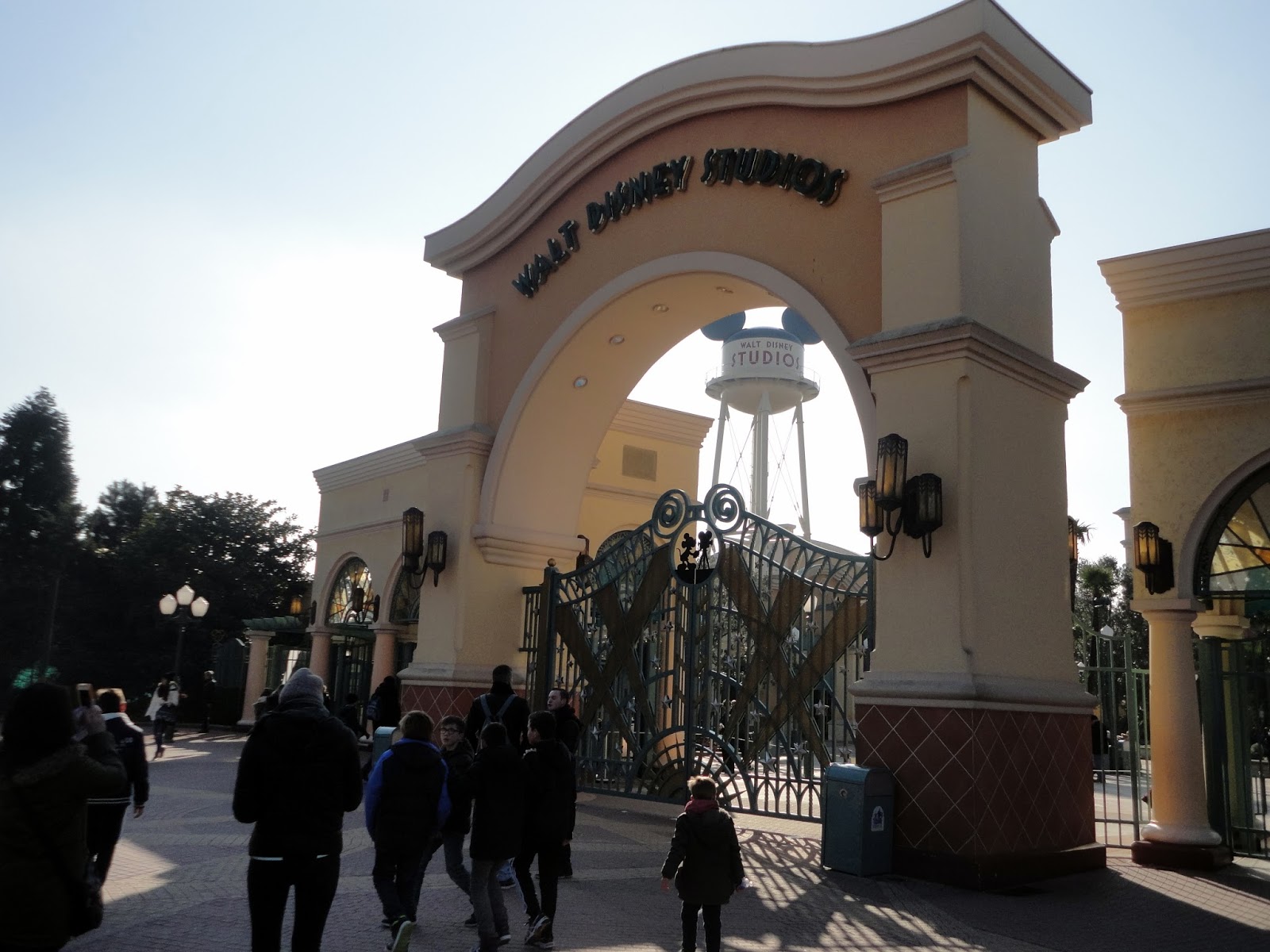 
Once through the gates the first thing we all wanted was food! Unfortunately we probably made the wrong choice as far as food goes. On entering the Studios you arrive in the Front Lot area and then enter a building called 'Disney Studio 1' which has two distinct areas. The left hand side is a large shop while the right hand side is a fast food restaurant called Restaurant en Coulisse which serves your traditional fast food; various burgers and a couple of salads.

The problem was we chose to stop here at lunchtime when everyone else had decided to do the same thing. We ordered our food relatively quickly but trying to find somewhere to sit down to eat was almost impossible; we tried the upstairs seating (which was very awkward to navigate through) before coming downstairs where we resigned ourselves to having to eat standing at a bar area (which had no seats!). But then we spotted some people leaving and we had to literally pounce to get the table. The tables were tightly packed in so you had no sense of your own space and because it was so busy you were very aware of other groups of people 'hovering around' waiting for people to leave. Plus the food was just very basic and nothing special...not a very enjoyable experience at all.

Anyway once we'd eaten we headed straight for the 'Toon Studio' area of the park and in particular the newest attraction at Disneyland Paris; Ratatouille: L'Adventure Totalement Toquee de Remy. 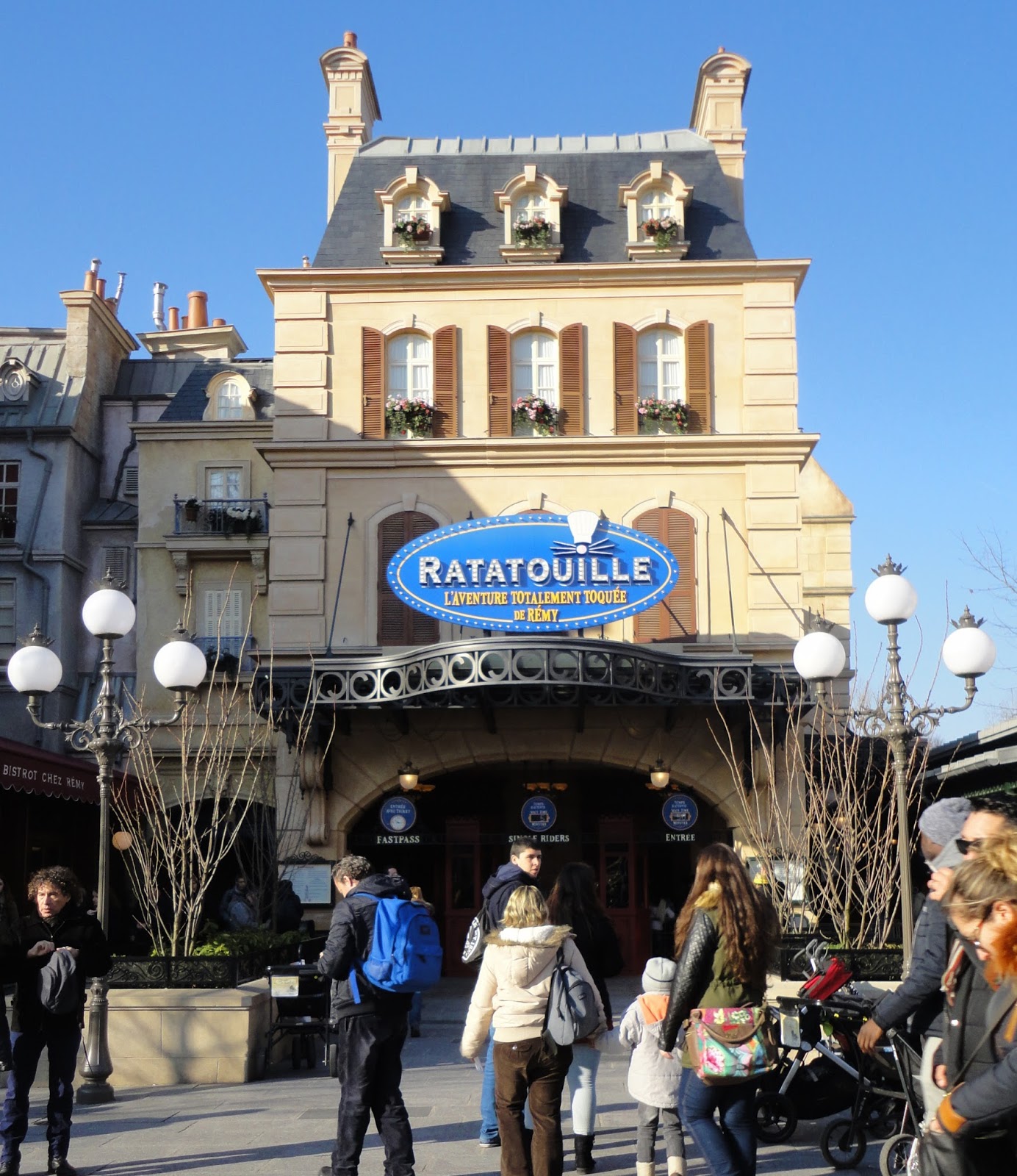 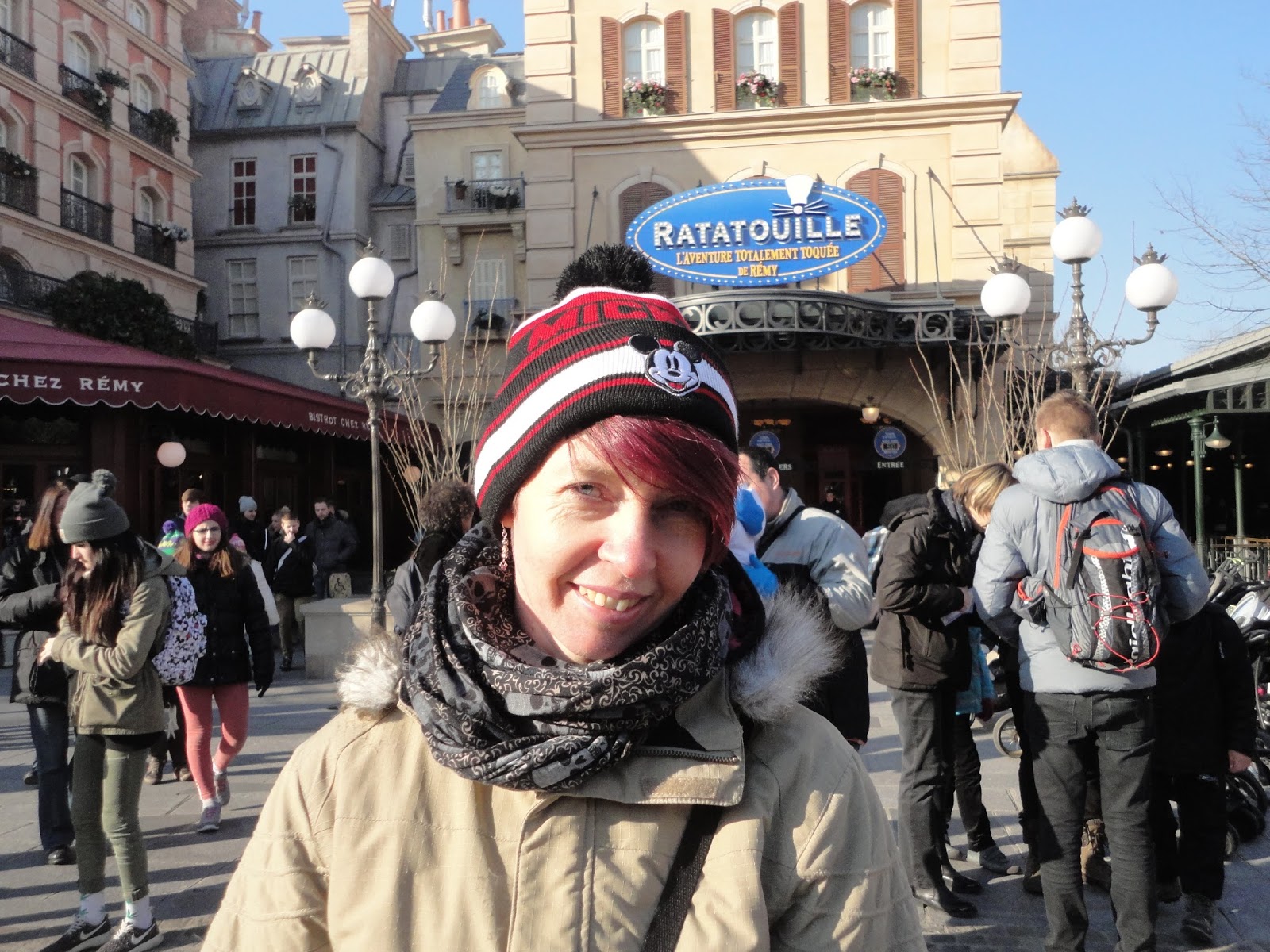 The wait time was 50 minutes but we decided to just go for it! Ratatouille is a new concept in dark rides and your ride vehicle operates on a trackless system as you enter different rooms that are a mix of film, special effects and props.  The ride is beautiful and I only wish we could have gotten to ride it more.

The area in which the Ratatouille ride is located is also beautifully themed, although it did remind me a lot of the France pavilion at Epcot; 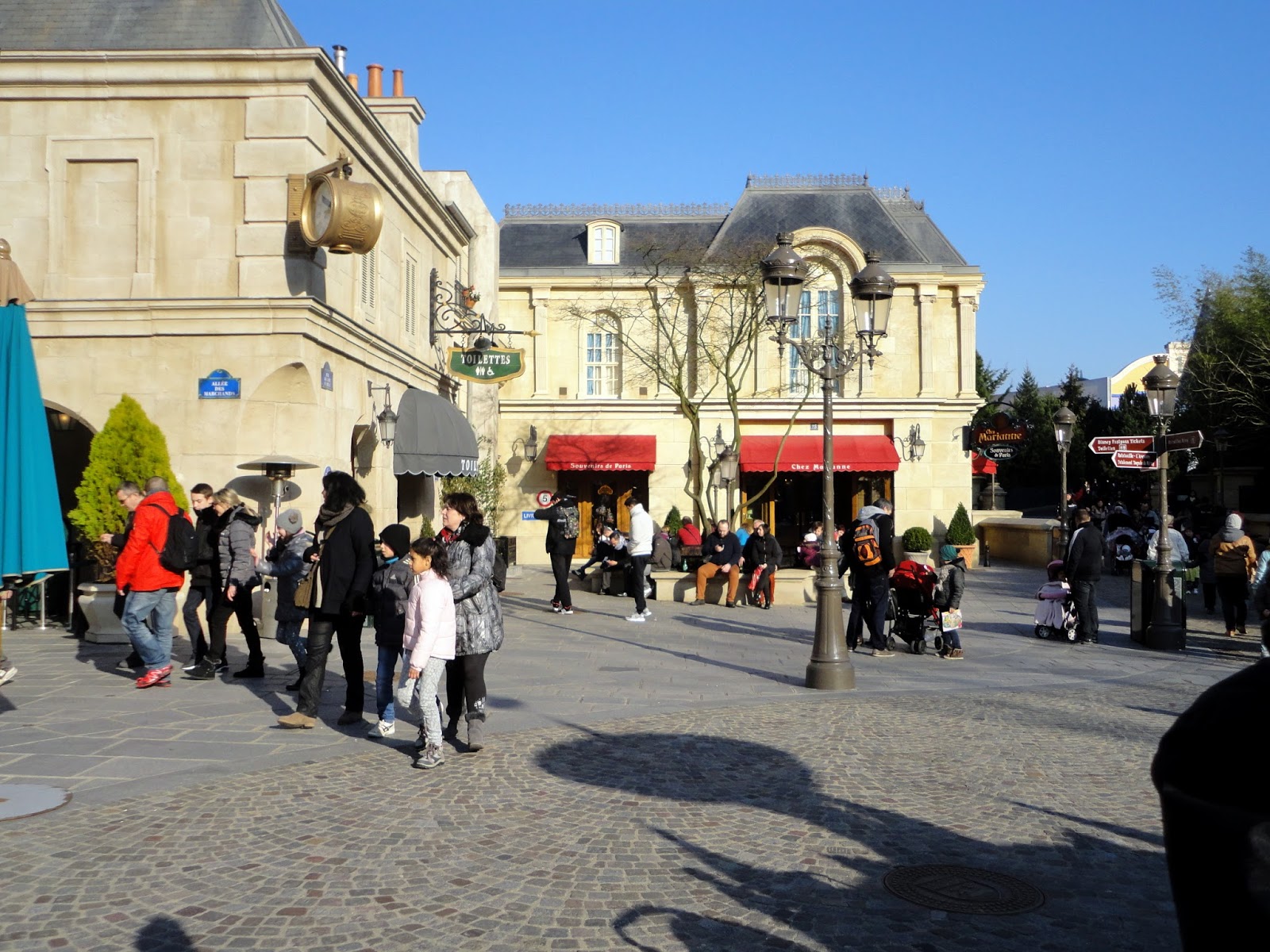 We then headed towards another Pixar themed ride; Crush's Coaster...now unfortunately we did not have the best experience while waiting for this ride, an experience which ultimately resulted in never getting the chance to ride.

The queue was at around 45 minutes which we were all quite happy to join and initially the queue moved relatively quickly, but after 15 minutes or so the queue began to slow down until eventually it stopped. But that was alright, sometimes the speed of queues vary but then I noticed that the music that had been playing had stopped. By this time we were surrounded by some rather noisy individuals who all thought it was perfectly acceptable to start smoking...something that was clearly signposted as 'not allowed'. This seemed to be quite common practice for smokers to 'light up' wherever they liked rather than in the designated areas...but disappointingly we also noticed that no-one seemed to be enforcing the rules about where it was and wasn't acceptable to smoke!!

Anyway, back to the queue...over the group of noisy individuals I thought I heard an announcement, but there were two problems; firstly it was not being played at the far end of the queue system where we were located and secondly it was only being played in French. We stood and waited a bit longer and then heard the indecipherable announcement again...by this point I was getting a little frustrated to say the least so I made the decision that we were leaving the queue. But as the people behind us in the queue weren't moving out of the queue area we literally had to push our way through and climb over the barriers that split the queue into 'lanes'. When we finally made it out to the entry point of the Stand-by entrance we found the entrance closed and cast members turning guests away. Now I appreciate that rides will break down and accept that it is an unfortunate part of any theme park experience, but what really upset me was the apparent lack of care or concern that was shown for guests waiting in the queue once the decision had been made to close the ride. Not one cast member walked the queue area to explain what was happening, the announcements were inaudible and only in French and when leaving the queue area there was no apology or even any sign of concern that guests were still standing in line. Not a good experience!!

All four of us were feeling a little disgruntled to say the least so we decided to wander over to the opposite side of the park to see what there was to do. Now I think by this point we were all struggling to enjoy the Studios...we walked past The Twilight Zone Tower of Terror (not a ride I would do normally) and despite a short wait of 10 minutes no-one was interested in riding it. We thought about the Studio Tram Tour: Behind the Magic, again with a relatively short wait time but couldn't muster any enthusiasm. We passed Armageddon: Les Effects Speciaux and Moteurs...Action! Stunt Show Spectacular but neither grabbed our interest. By now we were in front of Rock 'n' Roller Coaster starring Aerosmith a ride which in Florida is always a must do (not me as I don't really like roller coasters!) and the wait time was 10 minutes...I turned to the kids and Simon expecting excitement but was met with a shrug of the shoulders and 'not really bothered' reply!

Oh dear the Studios were turning into a bit of a disaster for us so it was time for a re-fuel and somewhere to get warm. We went into Disney Blockbuster Cafe the only other counter service restaurant in the park and walked into an almost deserted restaurant. We then had to figure out how to get served as it really wasn't very clear; it was a help yourself counter service that when we were there was very poorly stocked, you then took your tray to a cashier to pay and order drinks. The drinks were self-serve but rather than in US parks where it would be a free refills drink station this was controlled by tokens. So one token meant one drink...no refills...

We decided to head back over to Crush's Coaster and see if we could get a ride, but alas no, the ride was still down. So instead we headed into Toy Story Playland, the only area of the park we had yet to do.
This is a relatively small area of the studios which is home to three rides; Toy Soldiers Parachute Drop, Slinky Dog Zigzag Spin and RC Racer. and whilst the area is beautifully themed it didn't impress us enough to actually go on any of the rides. The Slinky Dog ride was definitely aimed at younger children, the RC Racer was basically a classic pirate ship swing ride but themed around toy cars and car-track and the Toy Soldier ride was your basic parachute drop affair. Nothing particularly unique and our two teenagers were not impressed and said they felt it was an area for 'little kids'!

We decided that we had had enough of Walt Disney Studios and headed into the Disney Village and partook of a little retail therapy!! 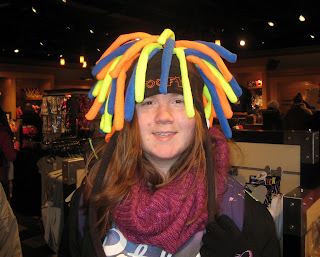 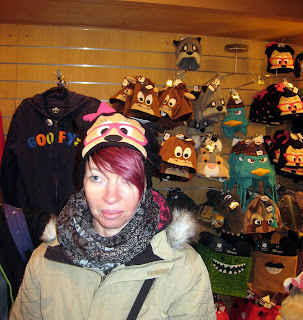 The obligatory trying on of hats!!

So a few purchases later we headed once more to our favourite eatery; Earl of Sandwich! We discovered their amazing soups on this trip which helped warm us up no end, followed by a yummy sandwich and we were all very happy. The day was now drawing to a close, so after taking advantage of the free wi-fi inside Earl of Sandwich, we headed back to the Sequoia Lodge. We stopped in at the hotel shop and bought a couple of beers and some chocolate before returning to our room for another well deserved sleep.

Posted by DisneyJayne at 23:24 No comments: