Day 31 and this must be the first grey day we have had in a while, in fact we had rain for a good chunk of the morning and it seems an age since it last rained.

While Simon tinkered about with his droid building projects I decided to go through my cookery books and have a bit of a sort out. Over the years I have collected recipes out of magazines or printed them out from online and have stored them in a crappy orange wallet; so I thought I would go through them all and see just what I had got. Well suffice to say about 75% of it went straight in the recycling; most of what I'd kept went back a lot of years I was throwing stuff out from 2007!!

And most of the recipes were simply for things that I would no longer cook as they wouldn't meet the specifics of either low carb or keto that we follow now. Although I will confess to keeping some of the cake recipes and quite a few cocktail ones too...well they might come in handy for a special occasion!

I even threw out complete cook books after I'd gone through them and torn out any recipes that I thought I might attempt one day! Suffice to say the whole activity took me way longer than I'd anticipated and resulted in a complete re-organisation! From this... 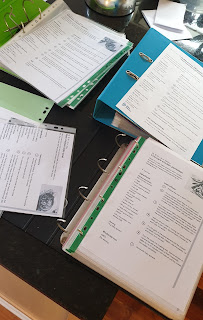 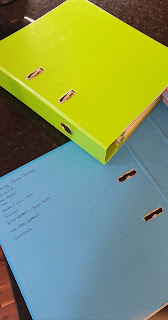 Two folders organised into sections...I just need to keep them that way now!

So the consequence of this lockdown malarkey is that I've completed a task that I hadn't really thought about doing, that was one of those 'if I ever have the time' jobs...guess what I had the time! And while it may seem a trivial task I at least completed it and feel as though I have achieved something and made the best of the day and I suppose that is all that we can do at the moment. Seize the day and make the best of it in whatever way we can no matter how trivial it may feel.