Many apologies for the delay between posts on my blog but finding the time of late has been tricky; busy at work, busy at home but now I'm able to grab a few minutes to put finger to keyboard!

One of the things that we like to talk about on the podcast I co-host (Disney Dream Girls) is food, and the range of options that can be available in Disney parks.

So I thought how about writing a piece all about the food I experienced at Disneyland Paris?! So here goes...

I think I should mention at the very beginning that when I visited Disneyland Paris it was back in February this year; it was very cold and it was what would be classified as 'low season' and I think both these factors had quite an impact on our food experience.

Also we were visiting as a family of four, but remember our two children are teenagers and so there were no children options to be had; we were in fact feeding four adults. Also we had picked this time of year to visit predominately from a cost point of view and so our budget for food was also limited. We knew that we were unlikely to be eating at any table service restaurants and that we would be relying on counter/quick service eateries.

Now each day we had breakfast as part of our hotel package and so we made sure that we took advantage of this and had plenty to eat! I've spoken about the breakfast options in a previous post - Disneys Sequoia Lodge Hotel Review Part 2 - so please check this out for more information and photos.

I think the main thing we became aware of very quickly was that the counter/quick service menus were pretty much the same no matter which part of the parks you were in. The menus were filled with the standard range of burgers, chicken nuggets and fries with occasionally (very occasionally!) something themed to the restaurant. For example Toad Hall Restaurant had fish & chips; and Restaurant Hakuna Matata had kebabs and Hakuna fries. I have to say that we all really enjoyed the food that we had at Restaurant Hakuna Matata especially the fries it was just unfortunate that we weren't able to eat here more often. Healthy options were also few and far between and were basically limited to salads - chicken, three cheese and vegetarian (whatever that means!).

Because of the time of year we were visiting not all of the restaurants were open all of the time. Having done my forward planning I was very aware of this and had made a note on my park map which days each restaurant was open. Luckily Disney had been very sensible and made sure that there was always at least one restaurant in each land that was open each day. So although this limited the choice available we found that over the 5 days we were there we would have been able to visit all restaurants (had we wanted to) as over those 5 days each restaurant was open at least once.
At Disneyland Paris they also have a number of restaurants that offer 'Buffet' service. Most adult options were priced around 27euros or £20/$30 which included one drink. Which for us as a family of four adults would have meant paying £80 ($120) minimum per meal which our budget simply wouldn't stretch to. We were therefore quite content to stick to the counter service options on offer.

The trouble with this plan however was two fold; firstly the choice of food as I've already mentioned was rather 'samey' and the second being the operating hours of the restaurants within the parks.

Now as I mentioned it was low season and restaurants had limited days they were open; this wasn't a problem because in theory there would still be enough restaurants open spread around the park. However one problem that we encountered, and on more than one day, was finding an open restaurant towards the end of the day. And by end of the day I am talking around 5.30pm/6pm in the evening which is what I would consider a prime eating time and was still 2 hours before the park closed at 8pm. In fact one evening we walked through three lands and tried numerous restaurants before finding one that was open. We even experienced restaurants that had unlocked doors and lights on but when we entered found there was no food being served and were asked, rather rudely, to leave by the cast members there! It all seemed very strange and very un-Disney!

Perhaps because of our experience of the US parks and their wide variety of counter service options our expectations were maybe set too high but we were really quite disappointed in what Disneyland Paris had to offer. In fact so much so that we decided on more than one occasion to leave the parks in search of food and ultimately ended up at Earl of Sandwich in the Disney Village. 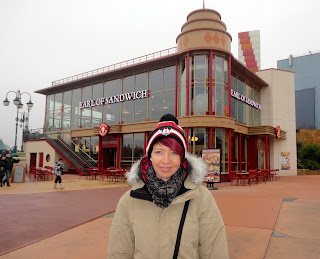 The choice at Earl of Sandwich was great (as always), really good value (hate to say it but much better value for money than in the parks!) plus they had free wi-fi (not yet available in the parks). We ate here more times than I can remember and had great food every time; we loved the soups on offer which were very welcome with the intense cold! I would definitely recommend eating here...just wish we had them over here in the UK!

Another downside of the time of year (and it being very cold!) was that those restaurants that had lots of outdoor seating weren't really where we wanted to be eating! Stopping for food or a drink was a chance to go inside and get warm. On one occasion the only place we could find open was Casey's Corner and with limited seating inside we had no choice but to sit outside to enjoy our hotdogs! On the plus side we did have prime viewing for the parade while we ate our dogs!

The lack of indoor seating also meant that quick stops like the Cable Car Bake Shop for a coffee and a muffin resulted in being unable to sit inside and having to wander out and about to find somewhere to sit down. On one occasion we found another restaurant with it's doors open but no food being served so we, along with other guests, took advantage of finding seats indoors. But we then had a cast member suddenly appear and although nothing was said it was very evident her task was to clear up after everyone as quickly as possible and encourage everyone to finish up and leave!

Now I am very aware that I have painted quite a poor picture of food available at Disneyland Paris but I have explained some of the reasons that I think led to this poor review. I do know friends that have eaten at the table service restaurants and have nothing but good things to say and I am sure during peak season with more restaurants being open the options available become much better. But let this review be a warning that food options in Paris are not the same as the US Disney parks so please don't go with high expectations if, like us, you will be relying on counter service restaurants.

Posted by DisneyJayne at 21:51 No comments: