Day 23 and the start of the Easter weekend.

Today is Good Friday and here in the UK is what we call a bank holiday, which for a good portion of the population means we get a days holiday. So we have decided to treat this weekend as we would do normally as a four day holiday weekend that we are going to enjoy at home.

My first little task of the day was to record a short 'happy birthday' video for one of my friends little girls who turns five in just over a weeks time. She was supposed to be celebrating her birthday in Disneyland Paris but obviously that won't be happening. Thankfully it was going to be a surprise for her and her sister so they knew nothing about the planned trip...phew! But that does leave her mum with the task of running around trying to organise presents at the last minute and so she decided to put a video together of friends and family wishing her daughter a happy birthday that she is going to put on YouTube because her daughter 'wants to be on YouTube' - so sweet.

We managed another two mile walk in 40 minutes...so it must be time for me to have a rant...first cyclist we encountered was cycling on the pavement, coming towards us and made no attempt to move onto the road where there is a marked cycle path which forced us to walk on said cycle path on the road! We then encountered a couple with a pushchair so we made room for them but will admit to taking a double take as we realised it was a pushchair for a dog.

We were about half way back home and I noticed three cyclists in front of us who had had to stop cycling up the hill (it's not that big a hill) and were 'resting' on the pavement. At the same time we had two cyclists approach us from behind, on the pavement and on the wrong side of the road to which Simon said out loud 'you do know there's a cycle path' as we crossed the road to walk on the opposite side where there is no pavement and just a grass verge! The cyclist then shouted back 'but the road is dangerous'...really? I was lost for words. Then as they encountered the three cyclists now pushing their bikes along the pavement they were forced to move onto the road and actually cycle where they were supposed to. I then heard one of the three struggling cyclists comment 'wish I'd put some budweiser in my back pack' - OMG you're not out for a day trip it's supposed to be a bit of exercise!! ARGH!!

I managed to squeeze in a little jigsaw time before spending an hour or so recording another episode of the Disney Dream Girls podcast that I co-host and today we were talking with a fellow podcaster over in LA, James from Creepy Kingdom, as he designed his ideal Disney park. 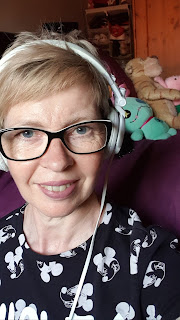 So that was my day. Stay safe everyone, stay home, enjoy the time with those you love most.