Day 29 and I could get used to this blue sky and sunshine filled start to the day.

The morning consisted of getting a few mundane around the house jobs done like the ironing! Followed by a little admin work for pre-school; we received some more information today about our governments 'job retention scheme' which meant an email to my wages person along with some calculated figures so that we can move forward as and when the scheme goes live later this month.

We had our usual lunchtime walk and managed another couple of miles in just 40 minutes and only saw one other couple walking; the same couple we had seen a few days back with their dog in a pushchair!

This afternoon I should have been at Derby hospital having my first annual mammogram since my lumpectomy last year but due to the current situation this had been cancelled. So instead I thought I would make the best of such a lovely day and top up my vitamin D supply by sitting outside in the sunshine enjoying a book.
I am currently reading The Carnivore Diet by Dr Shawn Baker and it's absolutely fascinating and a great read. I'd started it a little while ago so it's been great to pick it up again and read a good chunk of it. I've also got The Carnivore Code by Dr Paul Saladino to read as well - anyone would think I'm interested in all this eating the right stuff and staying healthy malarkey. I listened to a great podcast today by Ivor Cummins talking about our immune system and how the standard western diet is leading to all sorts of problems with insulin resistance which in turn is affecting the ability of our immune systems to work as effectively as they should; which seems very pertinent at the moment.

I also had another go at drawing today with an attempt at a landscape... 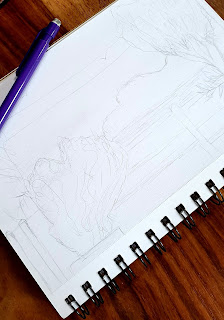 This evening I became slightly distracted by watching Harry from White Lies live on YouTube as he hosted a session about playing guitar...no idea what he was chatting about but he was very nice to sit and watch for a while! I think Molly needs to sit and watch it now as she is a budding guitar player and as the supportive parent that I am I would be happy to sit and watch it with her!! Have I ever mentioned that I love White Lies...
It's times like this that being a bit daft and holding onto memories becomes all the more special. As the UK government announced at least another three weeks of lockdown being able to reminisce and enjoy those moments as well as being a bit silly at times is, I think, what will help see us through all of this.