Yay it's Friday and the end of the week and it feels like it's been rather a long and tiring week for this household.

My morning was spent in work and at the insistence of my deputy I was told to take the afternoon off as I should have had last Friday afternoon off and hadn't. I hadn't prepared myself for having the time off so it was a lovely bonus to the day. And then I was lucky enough to receive an end of school year gift from my staff...

....ah red wine and dark...very dark...chocolate, I think my team know me pretty well.
But back to work and it was a morning of uploading children's learning journals, writing emails, a little banking and some general admin stuff.
I arrived home just as Simon and Ethan were having their lunch and just as the coffee had finished brewing...perfect timing. I noticed there were a couple of items of post addressed to me, I recognised one as being for pre-school and then I noticed the other and caught a glimpse of the letter head inside the envelope...my second 'gift' of the day... 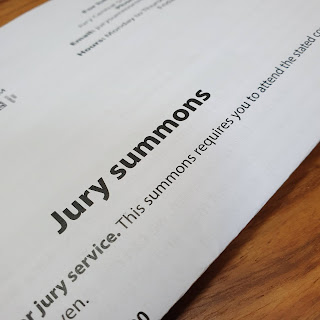 ...oh joy! I have no reasonable excuse to get out of it so I'll just have to suck it up and get on with it and hope that I don't get anything that goes on for too long. The only slight annoyance is that the date I have been given is in September and coincides with when the school year begins which means I will miss the first two weeks of the school year...not ideal but nothing I can really do about it.
So once changed and a little lunch eaten I set about the task of getting the house into some sort of order following the disruption of having the windows fitted this week. With Molly returning home later today my priority was to get her room sorted as we'd used it to store a few bits and pieces out of the way.
And as today has been rather warm cleaning around was a rather sweaty affair but I have managed to get three rooms cleaned and restored to a little more like normal. But I think the next couple of days will be taken up with cleaning and getting everything put back to how it should be.
With that I think it's time to stop typing, have a cuppa and enjoy some chocolate.
See you tomorrow.
xx
Posted by DisneyJayne at 22:01