Today was a day of getting odd jobs done.

First thing we had to take one of our cars to the garage for a 'recall'...slightly annoyed as this should have been completed when the car had its service two weeks ago. It wasn't until the garage phoned me a few days after the service that I found out that despite having my car all day they hadn't had the time to do the recall...mmm...

It was then over to our supermarket of choice to collect the weekly grocery shop and then once home I cracked on with the unpacking, wiping down, washing fruit and veggies, throwing away packaging and putting it all away while Simon and Molly headed out on a mission.

When we had visited a certain DIY store last week we had seen some garden furniture that we liked the look of but as we had three of us in the car at the time and a load of other stuff we needed to get we couldn't fit the furniture in the car as well. So today Simon and Molly went back over to said DIY store to pick up the furniture; they were hoping to pick up some other bits as well but unfortunately they were out of stock of what they needed which turned out to be a good thing as they only just got the furniture in the back of the car!!
Once they were home Molly set to putting the furniture together; two chairs, a sofa and a table and apart from me occasionally holding something she did it all herself...there was a little swearing at times but the end result was worth it. 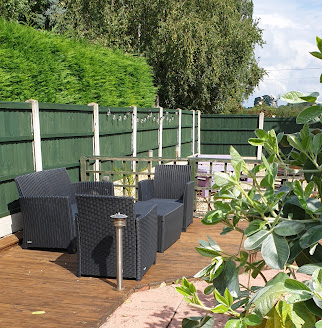 Before we headed back over to the garage to collect the car we dropped by my dads as he had called me earlier asking for 'a favour' but wanted to talk to me about it in person rather than over the phone. Turns out after a recent visit to the doctors they have discovered he has an irregular heartbeat that they want to get checked out, so the 'favour' was asking if we would play taxi service for him as and when his hospital appointment comes through. This is the first time since my mum died 5 years ago that there has been anything major happen and I can't begin to imagine what it must feel like facing something like this alone without his best friend by his side.

Once home I took half an hour to get a little more completed on my current jigsaw which is the first time I've touched it in at least two weeks...the box of pieces had been left in front of the window and the sun damage to the underside of the pieces was surprisingly strong!

Simon has spent the latter part of the afternoon cataloging the old photographs that we have inherited from his mum using an app called Photomyne. The app is great for scanning in the photos and ensuring that a great digital copy is made but we have hit problems when trying to record information about each photo as well as when we attempt to share or upload them. But Simon has now got a system going and by finding some free software online is now able to upload each album he creates and save all the relevant information to each photo. We are going to share the physical photos with family members where we can and then we can reduce the amount of physical storage by converting it all to digital.

So yet again another busy and productive day before Simon 'goes back to work' tomorrow and I take on the task of 'online selling'!

Take care, keep your distance,wash your hands and wear a mask.
xx
Posted by DisneyJayne at 21:34