Another Monday and another day when lots of things got done.

But as Ethan is on holiday from work this week and both Simon and I don't work Mondays we actually had a very slow and steady start to the day for a change.

After breakfast my focus was on tidying around the dining area of our kitchen as I needed to create space for one of my Christmas trees that will be going up this coming weekend. At the moment I have a very large wicker basket living in the space where the Christmas tree goes and so this needed to find a new home. Inside the basket is our collection of photo albums that I am very slowly going through and creating digital copies of. So the basket was emptied, cleaned and relocated upstairs to Molly's old room and all the albums were dusted and also moved upstairs. I also had a lot of loose photos that needed a new home so I took the chance to go through them and throw out a lot of packaging and old frames that were no longer needed. This in turn meant that I could store them all in a large Disney store bag which means that they are neat and tidy and were easy to move upstairs as well. With the basket and photos out of the way I could then have a good clean around.

That 'quick' job took a little longer than I'd anticipated so as the middle of the day rolled around we decided to nip out for a walk in the beautiful, but chilly, November sunshine. A walk that took us 3.2 miles in 59 minutes.

After a spot of lunch it was time for Simon to head off for his opticians appointment; just a check-up which proved to be successful with no change to his prescription. While Ethan and I ventured outside into the chilly afternoon in the search of Christmas lights...otherwise known as entering the shed!

Last year we had stored all our Christmas decorations away in our garden shed rather than in the loft space in our garage which meant getting to them this year was a lot easier. But we did have to empty a lot of the contents of the shed in order to get to everything! The aim of this afternoon was to see exactly what outdoor decorations we had, check to see if they still worked, bring inside the Christmas trees ready for next weekend and then work out which lights we could use and how.

Now in previous years all of my various Christmas lights have had cables fed through windows and doors to be plugged into sockets indoors but because we now have new windows and doors that are sealed units this is no longer possible. So I needed a plan to get as many lights working as I possibly could.

We have two outdoor electric sockets which means that I can plug in two extension leads, these leads will then sit inside weather proof boxes to which all the lights will then plug into. This is a system that I've used in the past for just the three blow mould decorations that I have which have relatively short power leads and need to be run off an extension. But this year I will need to run two extension leads, each with four sockets, so that I can power the majority of my lights.

This meant I needed to order an additional weather proof box and an extra extension lead, but first I needed to figure out what size box I would need. This meant measuring all the various plugs as they are all peculiar shapes and sizes to ensure that the box I ordered would be big enough for some of the more unusual shaped plugs! I also had a couple of 'taller' plugs which I had resigned to being too big for any box I could find until Simon reminded me that the extension lead and plug could lay on their side and therefore fit the box - doh!

But I will still have to scale back a little this year as I only have outdoor sockets in the patio area, which is where the majority of the lights will be, but I won't be able to have any along the front of the house as there are no outdoor sockets there. Although I do have a call to put into my electrician so who knows!! I have also thrown away one set of string lights as the transformer was cracked and unfortunately the function control switch was so close to the start of the lighting that it wouldn't have reached the weatherproof box and wouldn't have been safe. This does of course mean that once I have extra outdoor sockets installed (maybe this year but definitely by next Christmas) I will be able to treat myself to some new lights!

Back inside for a well deserved coffee and the next job was the ironing! Whoop!

But by the end of the day I had achieved all that I had wanted to; another productive day. Although writing this blog this evening was interrupted with a little candle emergency...well the candle wasn't so little...and emergency might be over stating it...although the description by the boys in the house was 'the candle has exploded'!!! 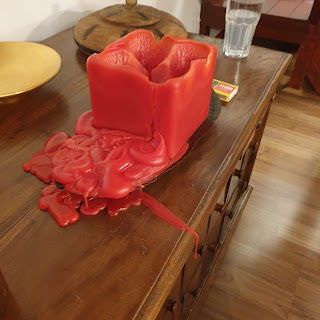 Maybe not quite an explosion but a crack had somehow appeared and had caused all the liquefied wax to ooze out...not only onto it's stand but onto the unit it was stood on and then onto the floor. In fact it had splattered onto the floor! The large sections that had begun to solidify were easy enough to pick up but it was the sections that had harden a bit more that were a little trickier to budge. But with a little elbow grease, a pallet knife and some isopropyl alcohol it was all cleaned up and thrown away! Such a shame as it was a cranberry scented one and made everywhere smell very Christmassy!
And with that excitement out of the way I need a cup of tea!
See you tomorrow.
xx
Posted by DisneyJayne at 21:18