Today saw the start of 'stage two' of our governments 'roadmap out of lockdown' which means that personal services can resume, non-essential shops can open and hospitality can operate outside only. Although social distancing, masks and track & trace all still apply...so yes we can do more but we effectively still have 'one hand tied behind our backs' so to speak.

But as it was Monday we still had the usual morning job of collecting our weekly grocery shop which also involved dropping a few bits and pieces off at my dads as he is still without a car.

We then had the helmet that Simon had made last week to post off before we made our way into one of our closest cities, Nottingham. We decided that we would venture into the city and just see what the day brought, with no expectations other than to have a walk and perhaps grab a coffee.

We were curious to see just how far we would walk on a trip to an urban area and whilst it was a more relaxed and gentler paced walk than our usual countryside walks we still managed 4.12 miles. Thankfully we had a dry and sunny day, if a little chilly at times, and were able to meander around the city and take in the sights and sounds that we have not been able to do in such a long time.

The city was quite busy and it was lovely to be back out amongst people and to soak up the atmosphere that a city has to offer. We have loved walking over the fields on our doorstep but it was so good to be back in a city and just wander.
As we had expected there were some shops that had ridiculously long lines and although I would have loved to have popped in and seen what was on offer (especially Disney stuff) we really weren't that desperate! So we walked and picked up a coffee and were pleasantly surprised to see the amount of work being carried out on new buildings and remarked on the changes since we had last visited.
I remember Molly and I visiting the city last August but it will be over a year since Simon and I have visited together and it was just lovely to be back and doing something a little closer to normal and to simply soak up the surroundings. It was sad to see a large number of shop fronts all boarded up and empty and it will be interesting to see going forward which venues survive and whether these unused shops will ever get filled again.
But we did manage to get a little shopping done...well it would have been rude not to have taken advantage of a special offer at Hotel Chocolat... 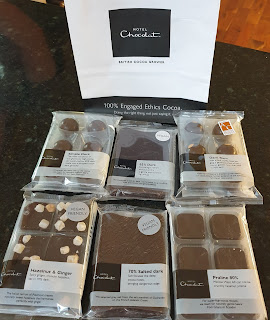 And then when we discovered we could walk straight into the Disney Store we just had to have a look around and although there wasn't really anything that took my fancy we couldn't not pick up a Star Wars figure for Simon...
Although I did get to choose the shopping bag! 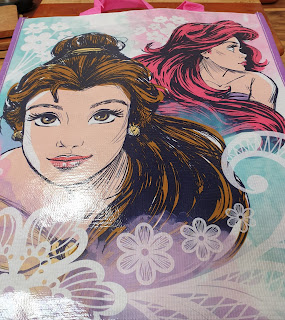 As we came home we stopped by an out of town 'DIY' store to look at some fencing as we need to replace some trellis panels; although we went in with one idea and think we may have left with something different...still in research phase though.
Once home we had a coffee and just spent some time chilling in the back garden as the sun was shining and it was actually quite pleasant. Simon has been doing some more digital drawing and just tonight was lamenting missing our regular life drawing class, Dr Sketchy's, and how we are so looking forward to hanging out with people we haven't seen for way too long now, and giving them a big hug when we do. While Simon got arty I managed a little more reading of my Gary Taubes book 'The Case for Keto'.
And then another almost normal event today was taking Molly to her kickboxing class...the first time since before Christmas! And although they are not allowed any contact at least they can now train in a proper gym kitted out for their sport.
The day was rounded out by making martini's...I had read up that vodka and gin martini's were both good low carb alcoholic drink options and had decided to give them a go! Actually both worked really well and then Simon discovered a Smokey Martini made with gin and whiskey!
Best stop typing now!!
Take care - cheers!
xx
Posted by DisneyJayne at 21:19