So this morning we weren't quite up and about as early as yesterday but still a little earlier than previous weekends.

We decided to venture out for a walk before we settled down to do anything else so we put on our wellies and wrapped up warm as it was very frosty and cold this morning.

As we started off we noticed a few tiny specks of snow in the wind and about a mile or so into the walk it started to snow; nothing major but it was definitely snowing if on;y lightly. By about half way through the walk the snow had begun to get a little heavier and by the time we were homeward bound it was coming down at a pretty decent rate and was settling quite nicely.

We managed a 5.6 mile walk in an hour and 45 minutes and when we arrived home we had a few millimeters of snow...

...and about 40 minutes later it was looking like this... 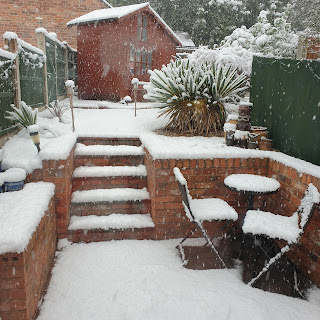 ...and an hour later we had about five and a half inches worth...
...but look how pretty it was when the lights came on. 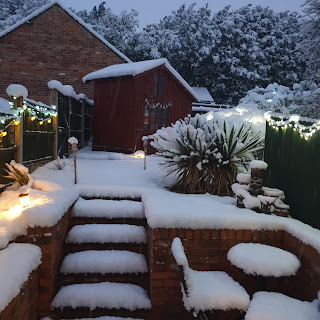 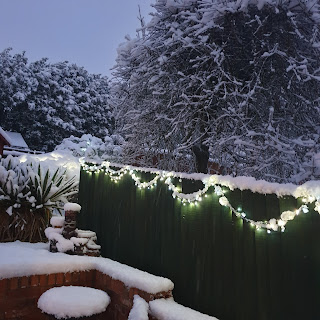 I did spend a lot of the afternoon video chatting with Molly and showing her all the snow that we have at home. She is at her boyfriends house about 3 hours away and they had the complete opposite weather; sunshine and blue skies! Molly loves the snow so it was an opportunity to make her a little jealous!
I apologise for the snow spam but we don't get it very often here in the UK and when we do we all kind of get a bit obsessed by it all. If we're lucky it might hang around for a day or maybe even two but then it will be gone almost as quickly as it arrived.
While Molly and I chatted Simon managed to complete all the electronics for his R2D2 build; he had some adjustments to make with the programming to control the timings and activity level of R2D2 when he comes to life and everything is now working as he had hoped it would.
The afternoon was rounded out with the now usual Sunday Disney quiz hosted by the podcast I co-host, the Disney Dream Girls...and this week I won! This does mean, however, that the job of setting questions for next weeks quiz has fallen to me.
So wherever you are and whatever the weather is doing, take care.
xx
Posted by DisneyJayne at 20:41