Another Monday has rolled around and started with the usual grocery shopping collection from our local supermarket of choice.

Once everything had been put away we decided to take a walk out a bit earlier than normal and managed another 4.25 miles in just under an hour and twenty minutes.

The afternoon saw me get a few household chores completed while Simon disappeared into the garage to cast a few helmet parts as he'd had an order come in.

Really seem to be struggling at the moment. And I know we are all in the same boat but for some reason I'm beginning to feel the strain of it all. Even though we are doing our best to keep active and get out for walks and find things to do the 'no end in sight' is now quite draining, and I wonder how long we, as a society, can keep this going. I can't even contemplate beginning to plan for anything as I have no faith that whatever is planned will ever come to fruition.

Disneyland Paris has now announced that it will no longer be re-opening in February as planned but is now looking at the 2nd April as a possible date. I know from social media that people had made bookings for late February and March and they will now have to go through the hassle of moving their dates or getting refunds...and probably not for the first time in these past 10 months or so.

So as Simon had been in the garage for an hour or so this afternoon with the heater on, he decided to take advantage of the slightly warm space and use the garage for it's other purpose...the gym! I on the other hand decided to start on my next jigsaw and as predicted it's a Disney one with a Christmas theme! 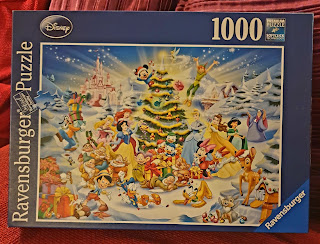 I have managed to get all the straight edge pieces sorted out but that's as far as I've got today...at least it will give me something to do!
Take care out there.
xx
Posted by DisneyJayne at 20:36