Today has been a Thursday and it has been yet another busy day.

Me and Molly headed off to our local Ikea first thing this morning with a shopping list in hand. Molly knew exactly what she wanted and having checked stock levels online yesterday she even knew the whereabouts in the store to get all that she needed.

On arriving we were about to walk straight in but we were greeted with an automated message advising us to wait until the light turned green. I hadn't even seen the red/green light system and had actually forgotten that some stores had adopted this system when social distancing was a big thing. But we dutifully waited all of a minute before we were 'allowed' to enter the store, and once inside it seemed to have been a pointless exercise!

Going around the store it was lovely to see that the majority of shoppers had opted to go without a face mask although it still baffles me when I see a couple with one half wearing a mask and the other not?! We had a lovely wander around the store and even managed a little look at all their Christmas bits and bobs.

It was an extremely successful trip as we came away with all that Molly had wanted plus a few bits that I had wanted to pick up and we  also came away with the obligatory packs of meatballs and bags of mini cinnamon rolls...including the special Christmas gingerbread edition.

On the way home we stopped by Dunelm as Molly wanted a shoe rack from there and I had my eye on a new black and sparkly laundry basket. We came away with both plus some stocking filler type Christmas gifts...my first official Christmas presents bought for this year!

After a spot of lunch me and Molly jumped online to get her car booked in for an upgrade to the stereo system. As her car is a few years old the existing stereo is just a radio with CD player without any USB or AUX points so she wanted to get it upgraded. And as luck would have it we found somewhere that not only had the stereo in stock but can fit it for us tomorrow afternoon.

Then I nipped out to the post office as we had a sale of one of Simon's posters to send out and while I did that Molly was able to attach a new sun-visor to her car as it had been missing one. Simon managed to find one online and it had arrived this morning...it's a slightly different shade of grey compared to the other visor but it fits and will do the intended job.

In between all of that I'd had numerous phone calls concerning my rings that I'd dropped at the jewellers to be repaired the other day. The upshot of which is that I will be able to pick them up tomorrow but there is a little confusion about the finish on one of the rings...I thought it was a gold ring but the jeweller informs me it is actually white gold and has repaired it as such, so apparently it now has a different finish to what it had...?? Really not sure what is happening as jewellery is not my forte, so I will pop along tomorrow and see for myself; to be honest as long as the ring is intact and fits then I will be happy.

I'd also had my new boots arrive today...a new pair of Dr Martens that were in the sale and were just too good an opportunity to pass up... 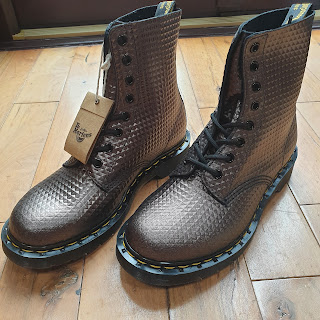 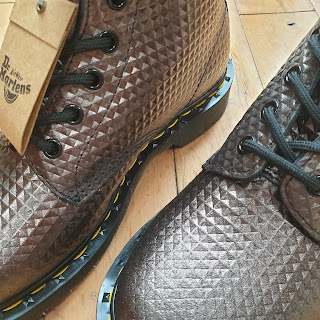 ...plus the pattern gives me Spaceship Earth vibes (for those of you who don't know what I'm referencing this is an attraction at Epcot at Walt Disney World).
The remainder of the afternoon was spent helping Molly. She wanted to make sure that the storage system she had bought from Ikea would house all the items she wanted. As the system is made up of a series of ready made drawers she was able to test out whether everything would fit in the drawers and part of this was for me to show her the Marie Kondo way of folding clothes. When we'd had our new wardrobes fitted last year we'd discovered the ways of Marie Kondo, the tidying guru, and her preferred way of folding clothes. And her way really does mean that you are able to get more items stored effectively and stored in such a way that you can actually see what you have. The good thing was that everything that Molly has will fit into the drawers that she has bought - phew!

And with that done I had just enough time to grab a coffee before heading down the gym for a little light weight work-out. And with the gym session completed I had a new meal to cook for dinner; a recipe I'd found a couple of weeks ago that I wanted to try called 'Gumbalaya' a mix of Gumbo and Jambalaya that is keto friendly and turned out to be very yummy! 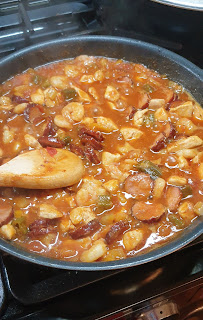 And with all that done it must be time for RuPauls Drag Race UK...see you tomorrow.
xx
Posted by DisneyJayne at 21:46