So Tuesday turned out to be a busy old day.

Simon was back at work today but I had the whole day ahead of me. The good thing is that as Simon works from home it does mean when I'm on holiday we can actually start our day a little later as there is no one to 'get out the house to work'.

Once up and about me and Molly jumped in her car and headed out to run a few errands. A few weeks ago a slight mishap at work resulted in my engagement and half eternity rings getting stuck on my finger and pushed out of shape. I'd managed to get them off my finger but both rings were left in a sorry state and in need of repair. 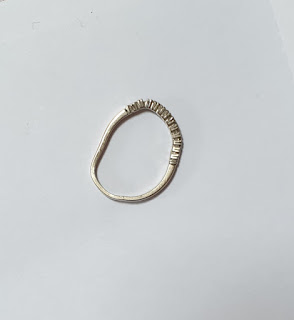 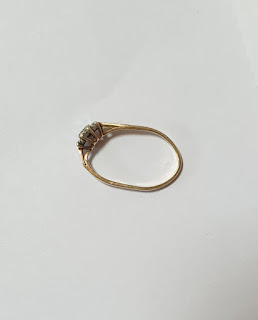 I'd had to wait a little while for the bruising of my finger to subside before I could think about getting them repaired plus I also wanted to get them re-sized. Having lost weight some seven years ago, and more importantly having kept the weight off, my rings had become slightly too big and I had on a couple of occasions managed to lose my engagement ring (thankfully I always managed to find it!). Today was the first chance I'd had to pop by a local jewellers to see what they could do.

Well my engagement ring should be a pretty straight forward job to put right but my eternity ring may be a little more tricky. When the rings became stuck on my finger I'd been able to remove the engagement ring through putting my hand in cold water and using some washing up liquid but the eternity ring just wouldn't budge so I'd had to use a pair of pliers to squeeze it into a shape that I could then pull off my finger. The tricky part of repairing it will be keeping the diamonds in place and it looks like I may have lost one of the diamonds as well. So it's not going to be a cheap repair job but these are important rings and so need fixing...it is very weird not wearing them everyday at the moment! But it's going to be a few weeks before I get them back as the jewellers are really busy with repairs.

While we were at the jewellers I also had some old pieces of jewellery that I wanted to get rid of. Most of the items had been inherited from Simon's mum but none were items that I would wear and it seemed daft to have them hiding away in a drawer. And while the jewellers could only give me scrap value for them they turned out to be worth more than I was anticipating which was a nice surprise and will off set the cost of my ring repairs.

Next we had to make a stop at the bank as I had some coin to pay in on behalf of pre-school; there was a bit of a queue so it took us longer than we would have liked and so we headed home straight after.

At lunchtime Simon and I took a walk out and covered 2.4 miles in 44 minutes. After a quick bite to eat me and Molly headed out once more and it was now my turn to drive. We headed to a local supermarket to pick a few things up plus Molly wanted to pick up some items as thank you gifts. With her moving down South in about eleven days time she will have to give up a few things that have been part of her life for probably the last ten years or more and so she wants to mark the occasion with the people that have helped her along the way.

We also made sure whilst we were out and about to stop by my bank as I now had a cheque from the jewellers that needed paying in! Back home again and I walked in to a freshly brewed coffee thanks to Simon followed by the smell of lemongrass as our new essential oil diffuser had arrived and was making the house smelly lovely. Although we do need to figure out how to work it properly as all the instructions are in German!!

Our day was rounded out with a trip to the gym and it's so nice now that the nights are drawing in not to have to drive out in the dark and the cold and instead just pop out to the garage.

Well with a glass of red wine calling I will sign off for the day.