Today was the day...the day of Molly taking her driving test!

It was an early start as her test was scheduled for 8.57am and she had a lesson beforehand starting around 8am. I'm not sure who was more nervous and anxious me, Simon or Molly?!

As she left the house at 8am she seemed very calm and composed. Being the organised person that she is she had sorted everything that she needed with her the night before and even had a thank you card and present ready for her driving instructor in case all went well.

I on the other hand had had a disturbed nights sleep, my stomach was doing butterflies and I was trying not to look at the clock and find things to keep myself occupied. Then at 9.38am WhatsApp pinged and we got the message we'd been hoping for -  'Passed! On way home'. Yay! We were so relieved and so happy for her as not only did she deserve to pass for all the hours of driving she has done but simply because she is a good driver!

But the biggest thing is that this now means her life can start to move forward as she wants it to. After starting to learn to drive in February of 2020 she then had to cope with the uncertainty that the pandemic brought. After lessons were re-started she really didn't know if she felt physically safe and comfortable starting them again and then when she felt she was ready we were hit with further and longer lockdowns. We were able to start getting her out and about around April/May time and after she passed her theory test in May the earliest date for her practical test was today.

So today has been a long while coming and at the back of all of our minds was the horrible question of what happens if Molly doesn't pass today? The waiting time to get a test date at the moment is horrendous and her driving instructor confirmed that had she not have passed the next date would have been around April 2022! But we don't have to worry about that as she has passed!!! 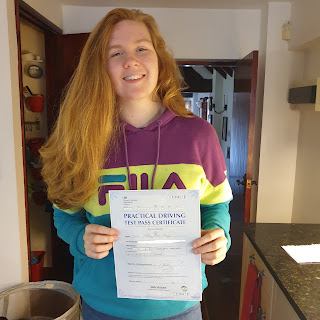 The great thing is she can now start doing all the things that she wants to do and that being able to drive gives her the freedom to do. She will be able to get out and about under her own steam to take photographs when and wherever she likes, as I know this is something that she has missed being able to do. It also means that she can now move in with her boyfriend and start their life together; we have big changes ahead!
But with the relief of passing we headed out for a celebratory 'coffee and cake' and from there we went in search of a car dealership where Molly had spotted a car for sale that was within her budget. It's a tricky business buying a car when you're Molly's age as not only does she have to consider the cost of the car but also the cost of the insurance which is more often than not more than the cost of the car itself!
We found the dealership but unfortunately the car Molly had seen on their website had been sold and although they had another car of a similar age and price it didn't tick all the boxes for Molly. This meant the rest of our afternoon was spent online searching for suitable cars. Between me and Molly we have found a couple of cars local to us and have made contact with the dealers to see if we can arrange to go view them tomorrow. Molly needs to get a car sorted sooner rather than later so she can keep up her driving and get herself sorted for the next big step in her life.
The day was rounded out with Molly's first kickboxing class of the week for which we had to provide the transport as she is not insured to drive our car at the moment as she is saving her pennies to put towards her own car!
See you all tomorrow.
xx
Posted by DisneyJayne at 20:22