We are now well into the half term break although neither Simon or I usually work a Monday anyways. But we were up and about relatively early as we had plans for the day...shopping plans!

To be fair the shopping was a bonus side effect of the real aim of today which was to meet up with my podcast co-host Michelle. As she lives about 90 miles away we can't meet up as often as we would like but every now and then we find somewhere that's not to far for either of us to get to and more often than not that happens to be Meadowhall shopping centre at Sheffield.

And another side effect of today was that Molly was able to drive us there and back in her new car which meant that she got to experience motorway driving for the first time. As Molly will be moving in with Dan in a few weeks it will mean she will need to get used to motorway and long distance driving as to visit us will mean about a 190 mile journey! But she did amazing and took it all in her stride, we were both super impressed and proud of her. It also gave her chance to have a good drive out in the car and it seemed to drive really well and did everything that was asked of it.

So we met up with Michelle and first order of the day was to find a Starbucks and grab a coffee and a sit down and simply have chance to catch up. Second job of the day was to head off to Primark because as every Disney fan knows if you want a little bit of Disney retail therapy then Primark is the place to go...especially now that the UK Disney stores are no more.And Primark did not disappoint especially as they were able to combine not only my love of Disney but my love of Christmas.
Then we spotted this hoodie...I was in two minds about it but the ears and bow on the hood along with Simon's insistence meant it came home with me. 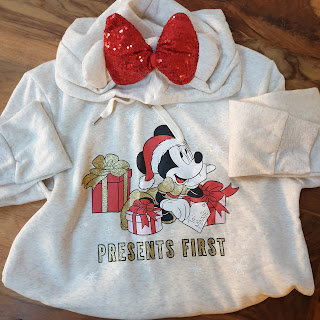 And these were just too cute (and inexpensive) not to buy... 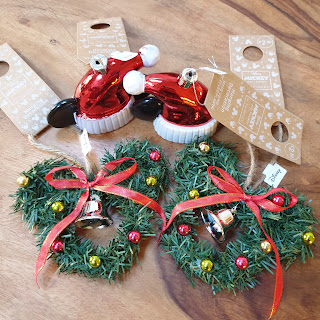 I did try on a lovely soft and furry coat (non-Disney!) but I put it back...I may regret doing that...oh well I will just have to go shopping again and see if I can find it in another store.
On the way home we got Molly to stop by a local petrol station so we could fill up her tank for her (well she was playing taxi for us so it seemed the fair thing to do!) plus this meant she got to fill the car up with Simon on hand in case she needed any help...which she didn't. Simon was then able to show her how to check the tyre pressure and top them up with air which is one of those useful things to know about and better she do it with someone there to help her for the first time. I on the other hand wouldn't have a clue but as I said to Simon later, that's why I keep him around!!!
Back home and it was time for a coffee before Molly headed back out the door to drive herself, on her own, to her kickboxing class - eek! Our 'little girl' is all grown up which is both exciting and nerve wrecking at the same time. So no more in and out the house playing taxi for her instead we now have time on our hands which I think may take a little getting used to.
Molly then had the return journey to master, in the dark and with twisty country lanes but she did it and she made it home so that meant a much needed glass of wine for me!! She is taking it all in her stride and just getting on with it all which means we are super proud of her but it won't ever stop us worrying about her.
Right so with Molly home it was time to cook dinner (keto chicken garam masala) before stopping for the evening with the aforementioned glass of wine and a little TV time.
See you all tomorrow.
xx
Posted by DisneyJayne at 20:36