Day 103...
Here we are at Monday once again and the now familiar routine of me and Molly collecting our weekly grocery shop.
Another quick turnaround of arrive at supermarket, greeted by the lovely Marky Mark, load up the car, drive home, unpack the car, wipe everything down, wash veggies and fruit, throw away packaging and put everything away! Then coffee!
My task this morning was to then figure out why the two parcels that should have been collected last week are still sat here waiting. Both parcels were due to be collected by the same courier company but on different days; I have had no communication about either of them and the information that I can access online tells me nothing other than that they haven't been collected...err...I think I know that much!
The system directs you to use an online chat to resolve any queries...problem is the online chat is not a real person and can basically tell you no more than you can find out for yourself by looking at your online account. Being very aware that most companies are encouraging you to look online rather than phone at the moment I had really tried everything I could think of before finally giving in and phoning.
Only to be met with an automated phone system which involved me either shouting information into the phone or using the keypad when instructed but only to be told that the information I entered was incorrect and then when I finally heard an option to speak to a real person their system hung up on me. I then tried for a second time and this time I was able to jump over the hurdles first time and finally speak to a proper person who promptly told me exactly the same information that I could see online! Then she said 'someone has tried to collect today'...err...no they haven't! We have had somebody in the house at all points since the first day of 'scheduled pick-up'...I should have taken these to a drop-off point instead.
Then I was put on hold while she 'tried to contact the courier' only to be told that she couldn't but if she took my email she would get back to me. I will admit to not being very happy about this and had a little moan...albeit a polite and restrained moan! I have also tweeted said company twice today in an attempt to get a resolution. I wouldn't mind but we have this company deliver to us all the time so I'm not sure why a collection is causing them (and me!) so much trouble.
The afternoon saw Simon tinker about with Arduinos, fibre optics and 3D printing, Molly has launched her very own Etsy store - Shutter Studios and we took a walk out in the grey and the wind. Typical British weather has done a complete about turn from temperatures at the end of last week around the 30C/90F down to 13C/55F; I started the day wearing shorts but by lunchtime I was in jeans!!
I also made a start on my latest jigsaw, a 2000 piece Disney one...that has a border that is all the same and lots of golden/brown pieces that represent picture frames... 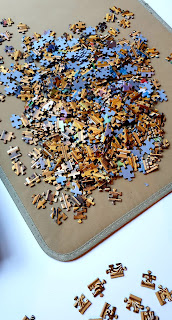 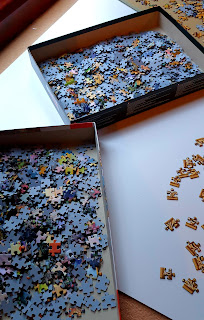 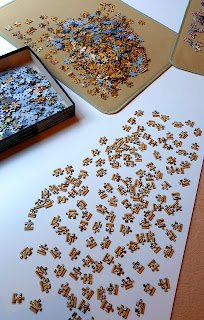 ...and still more to sort through before I can even attempt getting the outside completed!
Today has been a mixture of highly frustrating when trying to resolve the parcel problem (which still hasn't been resolved) and the complete opposite of being calming while jigsaw piece sorting. I guess this kinds of sums up what we are all going through at the moment. Times when we are really frustrated by the actions of others or by 'rules' that stop us from doing what we want, when we want countered with times of calm when you realise that there is nothing to do but accept and carry on.
Stay safe out there,
xx
Posted by DisneyJayne at 20:58