We were up and about at our usual weekday sort of time as we were finally getting our new front door completed. The company who had done our new windows a few weeks back had been missing a panel for our front door and today was the day for it to be completed along with a couple of remedial tweaks.

Not knowing what time the fitters would arrive we set about the day and while I completed all the ironing and set another couple of laundry loads going Simon continued with his latest digital art piece. Neither of us wanted to commit to doing anything major until the fitters had been and their work was complete.

Lunchtime rolled around and we had a bite to eat, we caught up with Ethan and Molly ventured out into the garage to continue with her latest craft projects. And still no fitter. Simon continued with his art and I decided to revisit a project I'd started ages ago but hadn't got as far as I would have liked; the digitising of all our old photographs. So I picked up the album I'd last been working with and scanned in all of 1990!

I am using an app called Photomyne; this involves me taking a 'photo' of each photo which the app scans and adjusts the colour saturation. I can then edit each photo and even tweak the colour. Once scanned and tweaked a link to an album is emailed and from this I can download them to my laptop. Once on my laptop I can then edit the data for each photo with any dates, times and details relating to each one. This has involved a little detective work at times; for example this photo... 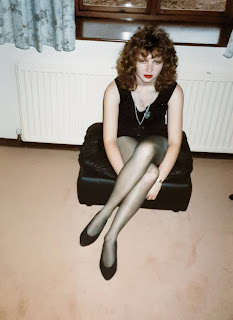 ...the only information I had was written on the back which said 'Late August 1990, off to see Prince at Wembley'. So with a google search and a calendar from 1990 I discovered that Prince did play three nights at Wembley at the end of August on his 'Nude' tour. Remembering I have a picture frame filled with Prince concert ticket stubs I was able to date it exactly to Thursday 23rd August 1990!!
And while all of the above helped pass the time today by about 4pm we had not seen any fitters and so gave their office a call. However, they couldn't really tell me anything, other than apologise and assure me that someone would call with an update either tomorrow or at the latest Monday! Mmm...not a happy person...it has been a lovely day here today and we could have been out and about enjoying the sunshine rather than sat at home waiting...and waiting...and waiting!
I understand that things can go awry sometimes but when paying for a service to happen the least that could happen is a phone call to update and explain. Especially when the cost of this service is not cheap!!
At the end of the day we popped out to a local supermarket to pick up a few bits we were running low on and Ethan jumped in with us as he needed supplies for a party he was off to this evening. He even had his own personalised taxi service as Molly drove him there. And although it wasn't too far to go Molly was able to practice using a sat nav as that will be part of her practical test.
And there we have a Friday, and the only thing left to do is to sit down and watch the final episode in the first series of Star Wars The Bad Batch!
See you tomorrow.
xx
Posted by DisneyJayne at 19:37