Well today got off to a bit of a wobble; we were supposed to be off out first thing to collect our weekly grocery shop but I'd not had my usual email and text so I decided to check my account.

Turned out that my booked slot was for between 4pm and 5pm and not 9am - 10am, even though I'd changed the slot yesterday and had an email confirming the change of time...we decided to stay home and wait till later to go fetch it.

So with the flow of the day changed Simon took some time this morning to get back to his R2D2 build. It's been a while since he's done some work on this because of completing his other droid project, art commissions and his normal day job simply getting in the way. So today it was sanding more parts ready for priming...apparently!

I on the other hand had the amazing job of ironing...whoop! Although while ironing I was also chatting with Molly via WhatsApp as she was busy uploading some new items to her Etsy store. She'd also sent me another papercraft character that she's created to print out to make sure it will work and can be sold as a downloadable item on her store.

I then managed to secure myself a flu jab after trying to get through to my doctors numerous times this morning, and amazingly I have an appointment for tomorrow afternoon. This will be my first visit to a doctors since COVID struck so that will be an interesting experience.

I was aware that the government are trying to get more people my age to get the flu jab this year but that they haven't targeted that age group yet and then I realised that I actually fall into the group of people that qualify because of a health condition that makes me more vulnerable. So this is the thing; I got diagnosed with breast cancer in March of 2019, had a lumpectomy in April of 2019, radiotherapy in June of 2019 and am now one year into having yearly check-ups for 5 years. What I hadn't realised was that this puts me into the 'vulnerable' category.

I had a text a while back about getting a flu jab and had kind of forgotten about it but then I'd had a reminder a couple of weeks ago and had been ruminating on what to do. So today I decided to figure out why I was being offered it. You see, my cancer was relatively minor, it was caught early and yes I had treatment but I have a habit of dismissing it and so it's not till something like this happens that it causes me to take stock of the situation.

My left boob (or as we like to refer to it...the naughty one) isn't the same as it once was. Although I had a lumpectomy and the scar is under my boob there is a definite difference between the two now...at least for me! The boob feels different to how it used to, the scarring has improved and it doesn't feel as numb as it once used to, but I still get weird pains every now and then; nothing major just little spikes and soreness.

And then I find out that being diagnosed and having treatment is enough to put me in the vulnerable group for a flu jab because I may have a weakened immune system due to the treatment I underwent. That's something I don't ever remember being told when going through my treatment so it does make you stop and think. I think I have tried to brush aside what I went through last year, eager to get on with this year and make the most of life (not that that is really happening for obvious reasons!) and just chalk 2019 up to being a pretty weird year, for a lot of reasons and not just the cancer one. But perhaps I need to give it more credence than I have so far, perhaps I need to acknowledge the impact it had on me and will have on me for the next few years. It's easy to try and dismiss things but harder to embrace them, accept them and incorporate them into your life.

On a lighter note the afternoon was filled with collecting the shopping, putting up a couple of shelves and attempting the papercraft people Molly had created...which was fun?! Well, Molly has created some lovely little characters and they were quite fun to cut out and assemble. But while these are very cute they are also very fiddly and were definitely not a family friendly activity in this house this afternoon as all that could be heard was a string of profanities as the frustration got to us...but in the end look what we created! 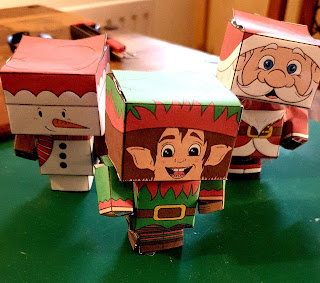 These were fun to create, even if a little testing at times, but it was still a giggle!
Well until tomorrow, take care and stay safe.
xx
Posted by DisneyJayne at 20:46