Well we weren't really sure what we were going to be doing today - funny we had no plans...can't think why?!

The only thing I really wanted to do was to get the Christmas decorations down out of the loft and put away the Halloween ones that were still sitting on Molly's bed. Brief explanation...access to the loft is via Molly's bedroom but as she is away at her boyfriends at the moment her room has become a bit of a storage stop-gap!

But in order to make way for Christmas decorating next weekend we also needed to make room in our hall as this will be where one of our three trees will be going. So our first job was to throw out some of the items that I'd tried selling via Ebay but had not had any interest whatsoever, along with all the cardboard boxes that I'd been stockpiling for said Ebay sales!

We then ventured upstairs to the loft and what was going to be a case of get one lot of items out the loft and replace with another turned into 'let's get this loft tidied'. Well when I say 'we' what I actually mean is that Simon goes up in the loft and I remain at the bottom of the ladder and pass things back and forth. I don't really do ladders and I definitely don't do lofts...cold and full of spiders...at least that's what I think!

So we started by emptying out about half of the loft space so that Simon could then take the vacuum cleaner up there and give everywhere a clean! Now this may sound a bit strange but having had a wasps nest somewhere in the roof over Summer we had a floor full of dead wasps. After much moving of things around and cleaning as he went the aforementioned wasps nest was discovered, nestling in the rafters! 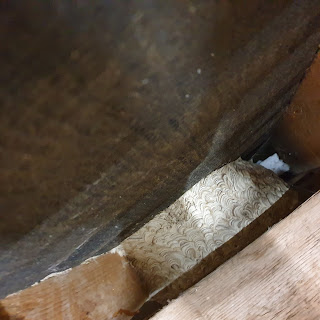 At least we now know where the wasps nest is and have been able to clear away all the dead wasps. My next job will be to get in touch with our 'pest control' guy and see what we need to do next, if anything!
By the end of the afternoon we had re-organised our loft, moved Halloween decorations back into the loft, moved the Christmas ones out of the loft and streamlined some of what we were storing up there...just random stuff that we could no longer remember why we were holding onto it!
My job for tomorrow is to continue with a general tidy around and clean through so that next weekend, when Molly is home, we can have a full-on Christmas decorating weekend. With outdoor lights to both the front and back of the house and three Christmas trees (four if you count a small one in Molly's room) we need a full weekend to get it all sorted. Oh and I've still not decided whether to order another set of outdoor lights...
So what sounded like a quick job this morning took us way longer than we expected but by the end of the day we had a great sense of accomplishment at getting a job done, and done well. Glasses of red wine tonight were well earned.
Take care out there.
xx
Posted by DisneyJayne at 20:55