...and 35 years ago I met a certain someone in a local nightclub on a random night out. I had no intention of going out that night and certainly not with, how shall we put this...an acquaintance...who called me up out of the blue.

My dad persuaded me to go out that night and across a dark dancefloor I was introduced to Simon...just so happened he knew the person I was with and they hadn't seen each other in a while. So rather than leave with whom I arrived I left with Simon instead.

Simon drew this ten years ago as part of his 365 Mickey's project so it seems apt to share it today. 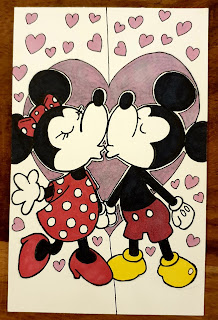 But as it was Monday and our day off it started like any other Monday with a trip to collect our weekly grocery shop but in a change to our usual routine we came home via another supermarket to do a little bit of Christmas themed shopping. I wanted to pick up some bits and pieces for us for over the festive period but I was also shopping on behalf of pre-school. We are putting together a hamper that we are going to raffle off over the next couple of weeks; fizz, pudding, cake, mince pies and other goodies.
This marked the first time venturing into an actual supermarket in what felt like forever...having stuck to ordering all my shopping online and collecting once a week I haven't really needed to go into a shop. We have been in and out of other places but this was the first time back in a familiar shop and it was just nice to be doing something that felt like normal.
Once home and shopping put away I then had a parcel for the US to pack and sort out the postage, which seems to have gone up an awful lot compared to the last time we shipped anything stateside! It was then off to the post office to send the parcel on its way along with another couple.
This afternoon saw us take a walk out in the sunshine; just a short one today of a couple of miles in about 40 minutes. Then fueled with a coffee I set about getting the rest of the cleaning and a little re-organising completed ready for the upcoming weekend and our Christmas decorations.
I do love all my Disney bits and pieces but it does make cleaning round a lengthy job but now it is all done it looks lovely I just need all the dust to keep away. Although at the weekend I will need to move it all again to lay some snow blanket so that everywhere looks suitably festive.
And even my 'Dickens Village' collection by Department 56 has strong Disney connections as I fell in love with it after seeing a large display in a shop (it may have been the 'World of Disney' or whatever the equivalent was back in 1991) in what was then known as the Disney Village Marketplace at Walt Disney World. 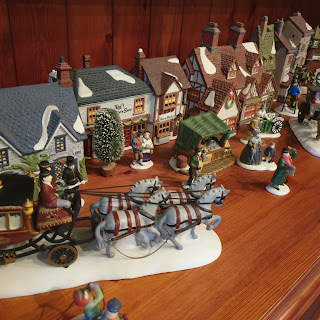 In fact I think I bought a couple of pieces to bring back home and of course since then Department 56 have produced a Disney Village series as well. It's probably a good job that it's tricky to get hold of in the UK as I don't know where I'd put anymore!
And we end the day with announcements from our government that the current 'lockdown 2' will end on the 2nd December but then we will be back into the three tier system which is going to be a bit tougher, but we won't know which areas of the country are in which tiers until later in the week. I do find myself losing the will to take as much interest in this as I perhaps should. I think I will wait until the tier for our area has been announced and then worry about what I can or can't do with whom and where!
Wherever you are, take care.
xx
Posted by DisneyJayne at 21:30