Today has been another slow day, with a few more household chores completed while Simon made more progress with the electronics for the mouse droid he is building.

Although the day started very overcast, grey and a little windy by mid-afternoon it had brightened up and we struck out on a walk. There were quite a few people out and about today, marked by the number of cars parked close to the bridlepath near to our house. Everybody we encountered was very polite, all spoke and all obeyed the social distancing rules. There was even music as we came across a small group sat in one of the fields, playing Abba's Dancing Queen!

We took a slightly different route today, making a mash-up of a couple of other walks that we have taken before and managed just over 3 miles in an hour and eleven minutes. Since we started doing these walks and using the Strava app to record them (from 23rd March) we have walked 108 miles in just over 38 hours! And we have said repeatedly said that we are going to try and keep these walks going post lockdown.

I also started another jigsaw as it's been a while...another Disney one of course! This is a Thomas Kinkade piece of art representing Snow White... 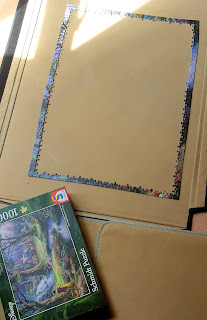 I must remember to get another jigsaw bought so that I have something lined up for when this one is complete.

Not much to report today, a relatively quiet day with the only noise being the ridiculousness of our government who seem to think that the rules laid down for our lockdown, and dutifully carried out by the population, are not for those in power. When an aide can get away with blatantly breaking the rules and then a prime minster who does nothing about it leaves the population feeling betrayed and taken for a ride. The rules were clear - stay at home - not drive 250 miles with a small child and a sick wife while sick yourself. Everyone else affected by this illness has done as they were told, made sacrifices, missed funerals, not been able to celebrate birthdays, missed holidays and so much more but apparently if you work for the government you can do whatever the hell you like!

So if the government can't follow their own rules then why should we have confidence in anything that they say. Apparently it's safe for schools to re-open to more children from 1st June...do I have confidence in that? Teachers have done an amazing job looking after the children of keyworkers; small numbers of children in their own little 'bubbles' no-one knows what is going to happen when more children are introduced. Apparently the thinking is that children may possibly not be that good at spreading the virus...so where's the evidence for that? Or is that the case because children have not been in school, mixing together and spreading it around? I don't know I'm not a scientist and the scientists don't seem to really know either.

So perhaps we should just all do what we have been doing and stay home, stay safe and keep away from any government aides!