The day started with a little work followed by an hour or so chatting with my fellow Disney Dream Girl, Michelle, as we recorded this weeks podcast ready for release on Sunday.

It was then back to work as I'd decided to take the time to go through and review all our policies and procedures. I'd figured it was probably a good idea to get these all up to date before tackling any new ones that I need to bring in when, or if, we return anytime soon. Plus I know that I will have tons of risk assessment paperwork to complete as and when a re-open is on the cards.

Chatting today though with Michelle, who also works in education, and we both commented that we and fellow colleagues are all fearful of returning to work too soon. We can't understand why schools don't simply remain closed until September, when the next academic year starts, and when we will have a better idea of what this virus is doing and what part children have to play in all of this. Whilst we know that the majority of children that do get the virus have either very mild or no symptoms we also know that for a rare few they have been known to develop some quite nasty and scary symptoms. There is also evidence now coming out to suggest that whilst children may have no symptoms they can still carry the virus and may carry just as heavy a load of the virus as adults and possibly even more so. Again, should we not be letting the scientists do their thing and gather as much evidence as possible so that more informed and pertinent decisions can be made?!

Really felt quite despondent at times today and have tried to stay away from social media and the news as much as possible because it was just getting to me too much. There is so much speculation going on, so many papers reporting what the easing of lockdown will be and when but as the government hasn't had its three week review (happening today) and has said that a plan will be announced on Sunday I don't know how they can 'report' on it. Then add into that everyone's differing take and opinion on social media and it just becomes all the more confusing and, quite frankly, scary.

So an afternoon that started with our usual lunchtime walk was a much needed distraction. We decided to do one of our usual routes but in reverse which meant half way around we had a pretty steep hill to go up (rather than down) which I really felt in my glutes!

I then did a little more work followed by some time sitting outside with a coffee or two reading my Dr Ted Naiman book - really starting to make sense now!

I had my weekly delivery from a local dairy farm called Bluebells who have expanded their delivery service out to personal customers rather than just wholesale as they did prior. They produce their own milk and artisan ice-cream but you can also visit their farm where they have a cafe and play area for  kids. So it's been nice to think I can help support a local small business during this time plus Molly and Ethan are happy because being the soft parent that I am I keep letting them have ice-cream...this week it's Cookies & Cream and Biscoff flavours! 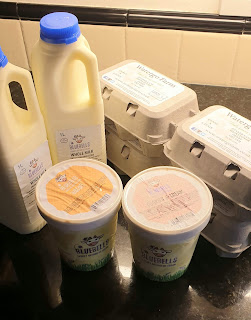 The day was rounded out with a spot of bodyweight exercises for me while Simon and Molly went down 'the gym'. So that's another day done, another day keeping safe. While it is a very strange time that we are living through, and one that seems to have no clear outcome, I hope that the powers that be take on the advice of the scientists, that they make rational and sound decisions. That they recognise that this is a marathon and not a sprint and perhaps taking things slow and steady will enable us to learn more about this virus, to learn from other countries and come out of this without causing anymore unnecessary pain and suffering.