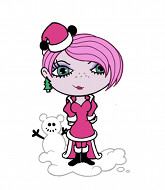 We had a fun filled evening yesterday attending our favourite burlesque show called La De Da Cabaret...in fact it has been two years since seeing this show. So it was great to be back if a little sad to recognise the length of time in between visits. It was also the first time I've worn in heels in about two years as well!!

The evening was filled with burlesque and cabaret acts, we had a strong man, hula hoops, fire breathing, singing, comedy and of course burlesque. Can't recommend one of these evenings enough and producer Scarlett Daggers always manages to put together shows with a breadth of performers.

We even had to contend with a false fire alarm as the smoke machines being used on stage accidentally set off the alarms - oops!

The only sad thing was to see so many people wearing masks, seemingly defying all levels of common sense. Everyone together in the bar before hand without masks...move into the theater and the mask goes on...sit down in the auditorium with a drink in their hand and then take off the aforementioned mask!! I just don't get it...if you think that masks are helpful then surely the mask should stay on your face the whole time you are in the building and not just when you're not drinking! Or maybe this virus only goes after those of us who don't have a drink in our hands? And then watching the audience as the night moved on, and more alcohol had been drunk, and the number of masks being worn at the 'correct times' seemed to become rather haphazard!!

But a late night last night meant a very relaxed and late start to the morning today which was much needed after a rubbish nights sleep and was the slowest morning in a long while.

Just before lunch we finally received a delivery we'd been waiting for from Yodel; the delivery driver was lovely but the service from Yodel has been rubbish. The parcel was due here at the latest by 7th December and had been sitting at their 'national hub' since the 1st of December...simply ridiculous that it took that long to get to us. But at least we have it now and it then meant Simon had a job to do as it was an exercise bike which needed assembling! Another edition to our home gym set-up.

I had the fun of updating the online grocery shopping coupled with a little online car insurance research as I was also able to get in touch with the garage about taking delivery of our new electric car. All being well the car will be delivered on Monday; it's all very exciting although a little scary at the same time as I think there maybe a bit of a learning curve involved. If only for the fact that we will move from a manual gearbox to an automatic!

Then we popped out this afternoon as we had a parcel to drop at the post office and cheques to pay in at the bank. We then thought we'd nip over to our local Starbucks for a quick coffee, however the traffic had other ideas! Unfortunately for us we'd timed it to clash with football traffic, so much so that the road we wanted to take ran alongside the football ground and so was closed. A quick u-turn and we headed for a Costa instead! And happy to see the staff were not wearing masks...although most of the customers were wearing them to stand and order and then remove once they were sat down - again this virus must only operate at certain elevation levels (yes I am being sarcastic!).

It was then time to try and chill out and while I attacked the jigsaw Simon jumped on the new bike! We are both aiming to get a little fitter by taking the time on the bike by attempting to achieve a zone two workout in...apparently this is best for heart health and is good for fat burning! This means, for me, working out with a heart rate of between 100 and 120 per minute. I've yet to have a go so I will report back at a later date. I am anticipating it being uncomfortable for two reasons; first I hate anything aerobic based and second I think it may be a little sore around the bottom and thigh area!!!

And with that I will take my glass of red, grab some chocolate and settle down for the evening in front of the TV.