And we have another Saturday in lockdown.

Well the day started with Simon discovering that he'd run out of contact lenses...oops! So a phone call through to the opticians, followed by waiting for a call back resulted in being able to pick up some spares to see him through until his next supply turn up. A little annoying when you pay for a service that is supposed to ensure a delivery before you use up your current supply...but at least he could get hold of some today.

So while Simon nipped into the opticians I went to visit Jon the Community Champion at my local Asda who had yet more goodies for pre-school to support this weeks activities. We are making pizzas with the children by using mini wraps as the base, tomato ketchup and then toppings; a really simple but effective way to create pizzas with our little ones.

So after dropping all the goodies off at pre-school we headed home and then headed straight out again for our now usual Saturday stroll into the next village for coffee. On our walk home we spotted my brother and his wife clearing out their old house; they have just moved into a new place and had the old one to clean before handing it over to the landlord. So we spent twenty minutes or so catching up with them and putting the world to rights.

After a spot of lunch we embarked on a few jobs that needed doing...well I say we...what I actually mean is that Simon completed the work while I 'supervised'! We had a couple of fixes for pre-school to sort and then Simon had an arm for his large digital drawing tablet to fix to his desk so that he can move the tablet into a better position for drawing while also keeping it out of the way when not using it.

While Simon did all the fixing of stuff I decided to make some low carb banana bread...it has taken me until lockdown number three to succumb to making one of these but it had to be a low carb version of course! 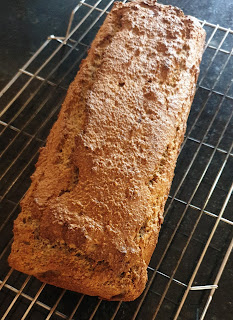 We also managed to catch up with one of our neighbours today...it has been so nice today to simply chat with 'other people'! But the sad thing is that their mother is in a care home suffering with dementia that appears to be getting worse...and of course they haven't been able to see her properly over the past year. Although they do have an appointment to visit towards the end of this month that is conditional on them taking a test that comes back negative! But my neighbour is concerned that she could be nearing the end and may no longer recognise family when they do visit. It is so sad that what could be the last year of their life has had to be spent like this especially when it has been recognised that a lack of contact and lack of visitors for dementia patients is causing a detrimental affect to their long term health.
Then for dinner tonight I made keto pizza with Ethan for the first time. This is something that the boys of the family normally make so I thought with Ethan's help I'd have a go tonight. So easy to make; a base of eggs and Mozarella cheese baked and then topped with tomato paste and tonights toppings of choice - chicken, pepperoni, sun-dried tomatoes, olives, peppers, oregano, chilli flakes and oodles of cheese on top. 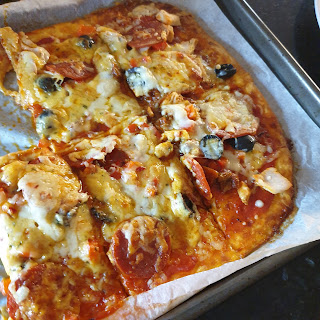 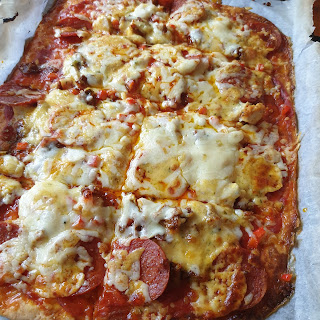 The proof was in the tasting and it was good! Tastes like pizza but without the carbs, what's not to love about that!
Now it's time to take my wine and watch RuPauls Drag Race and maybe have a little dark chocolate with a slice of banana bread!!
Take care out there.
xx
Posted by DisneyJayne at 20:57