Well today was Shrove Tuesday (or better known as Pancake Day) and it was another quiet day.

First thing this morning we had a local flooring company stop by to measure up for some new flooring. When we revamped our bedroom last year with new built-in wardrobes the other thing we had wanted to do was to get rid of our carpeted floor and lay a new wooden one. But various lockdowns and 'tier' systems had all put a halt to that as we didn't know how, or if, companies were able to visit let alone install flooring. But an email or two later and we have been able to get a local company out to measure up and now await their quote!

Then my next job was to dig out the 'Crock Pot' from the back of the cupboard, dust it off and set about creating something for dinner this evening. I had decided to make a beef bourguignon which I have not done for ages. Although between not being able to find the operating instructions for my 'Crock Pot' (that's how long it's been since I've used it!) and then my scales not working (three changes of battery later and we were back in action) I did begin to wonder whether it had been such a good idea! But it was all sorted and cooking away by mid-morning and the kitchen was filled with lovely red wine infused aroma's all day.

That did mean that I had the rest of the day to devote to getting some paperwork and accounts completed for pre-school. It's one of those jobs that has to be completed at the end of each half term and I was determined to get all the work I needed to get done, done by the end of today. I haven't done too badly and while I have a little more to do tomorrow it shouldn't take up too much of my time.

In between the pre-school work we took a short two mile walk out at lunchtime and ventured out over the fields completing one of our regular circular routes that we haven't done for a fair while as it has been just too wet. But thankfully with our wellies on we were able to navigate our way around and avoided any stuck in mud disasters!

I've been chatting with Molly on and off all day as she has been busy creating some custom artwork for a new client. It's great to see her getting a little more work for her business venture; Shutter Studios.

And of course it was 'Pancake Day' which normally means that Molly makes traditional pancakes for us all but as she is not at home we decided to go down the low carb route instead. This is Simon's speciality that we call a 'sweetie pancake', but is more like a sweet omelette... 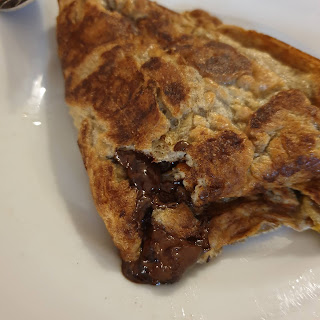 ...a couple of eggs, splash of cream, a little baking powder and then spices of your choice (I like cinnamon and nutmeg). Cook it like an omelette and as the second side is almost cooked sprinkle in some dark chocolate before folding over into a triangle shaped parcel. And voila an oozy chocolate pancake/omelette creation - yummy!
Right, think it's time to stop now...stay safe.
xx
Posted by DisneyJayne at 21:08