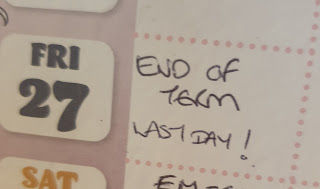 I set off for work at the normal time armed with goodies for my team. When I arrived at work I was greeted by this attached to the front door... 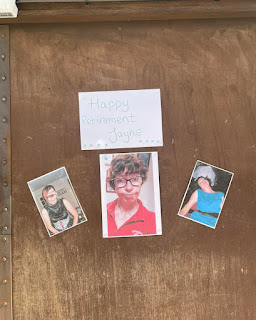 Suffice to say there were more 'dodgy' photos displayed inside along with a massive banner wishing me a 'Happy Retirement'.
But the day started with me handing out some gifts of chocolate and alcohol to my team along with some cakes and strawberries and cream to keep us going throughout the day. My team knowing that 'sweet stuff' is not really my thing anymore had prepared a more keto friendly option for me...
Although there was still work to be done over the course of the day it was a much more relaxed and chilled out kind of day compared to the normal hustle and bustle.
Midway through the day the children presented me with my leaving card and gift to which I am extremely thankful to all my staff... 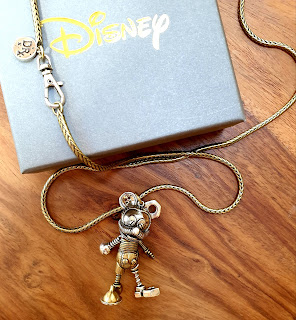 And although it has been my last day at work I will be staying involved with the pre-school as chairperson on their committee.
I started on the committee way back in 2001 when Ethan started at the pre-school. I'd volunteered as a parent helper whilst heavily pregnant with Molly and I was talking to one of the staff and happened to  mention that I used to work for a bank. Their ears pricked up and asked if I would like to take on the role of treasurer...I said 'yeah, ok, don't see why not' and the rest is history.
After a couple of years on the committee I moved into a paid role of 'administrator' before eventually joining the team as an early years practitioner in 2004. I attended evening classes to study for my level 3 childcare qualification which I'd achieved by mid 2005 and by 2008 I was manager!
We grew from a small pre-school that opened for just 5 mornings a week to a very busy full five days a week venture. A small team of four grew to eleven at it's peak. During my tenure we have been inspected by Ofsted three times, I helped the pre-school move premises back in 2002 and then again in 2020, we've held so many fundraisers from cake sales to Christmas fairs to sponsored bounces to 'Back to School' discos, fashion shows, retail evenings and more.
And not only was this the pre-school that both Molly and Ethan attended it was also the pre-school (or playgroup as it was known) that my brother and I attended way, way back in the early 1970's. So I cannot walk away completely I will continue to support them as best I can in my new role of chairperson I just won't have to 'go to work' anymore.
So what will I be doing in my 'retirement'? Well at the moment I really don't know, but what I do know is that I am going to take my time to figure out exactly what I would like to do with my time and for a change put my wants first!
But back to today...and back home; my first task of the late afternoon was to jump online and record an episode of the Disney Dream Girls podcast for this coming weekend.
My next task was to get out my cosplay outfit ready for Em-Con tomorrow with our fellow Star Wars geeks the East Midlands Garrison. I needed to make sure my boots were clean and comfy to wear and I needed to try on my wig to make sure I remembered how it should look. Thankfully both tasks were completed with ease - phew!
And now I think it's time I stop typing as we have the new Obi-Wan Kenobi series to start watching this evening...I think we better get it watched so that we don't get it spoiled tomorrow as we will be amongst a large contingent of other Star Wars fans!
See you tomorrow.
xx
Posted by DisneyJayne at 19:55