Day 13 - the day of fetching the shopping!

So today is the day I had to venture out into the big world for the first time in 11 days to fetch my grocery shopping.

I normally have a weekly shop that I order online and collect from lockers at my local supermarket and this is what I did today. Although this was a bigger shop than normal but only because I hadn't been able to get a slot last week when I wanted and so I have had to make my grocery supply last longer than normal until today.

So me and Molly jumped in the car and drove the few miles along very quiet roads (so pleased to see this), at one point we drove over the M1 (one of our busiest roads in the UK) and it was considerably quieter than normal.

Arriving at the store we were able to drive straight to the collection lockers and park up; as we arrived a couple of store employees were just loading the lockers and our shopping was actually still sitting in crates waiting to be loaded. So that meant it was super quick to get the shopping from the crates into the boot of the car. It was nice to see one of the usual employees who stocks the lockers a chap named Mark who me and Molly affectionately refer to as Marky Mark - don't know why it's one of those daft things that got said a fair few years ago now and has just stuck, not that Mark knows this!!

When we got home we unpacked everything and wiped everything down with anti-bacterial wipes and threw out as much packaging as we could along with all the carrier bags; deciding to adopt the 'better safe than sorry' approach!

But the good thing is my fridge and food cupboards look a bit more normal than they did yesterday and I feel significantly calmer now that I have ventured out and made it back with most of what I needed. Although there was no toilet paper and for some reason I only received one bottle of red wine and not the two I had asked for; apparently Merlot was in stock but not the Shiraz...really...surely they could have given me two Merlot instead!!

The rest of the day was spent doing some administration work for pre-school, before I took a few minutes to finish off the jigsaw I've been doing.

Oh and because it was apparently National Wear Your Ears Day today this happened...purely for use on the Disney Dream Girls podcast facebook page of course! 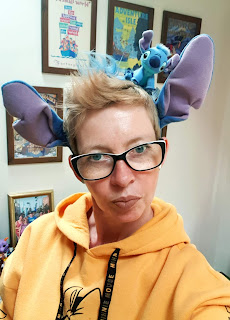 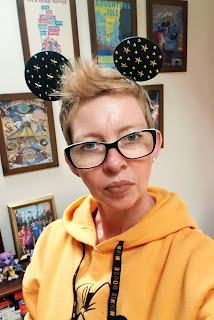 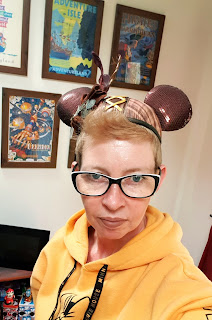 So that's my day...I survived leaving the house...I returned with food...I did some work...I completed a jigsaw and a range of Mickey Mouse ears were worn...pretty decent day I would say!

OK time to Netflix and chill,