Simon was up and out early this morning for a 7.30am barbers appointment! After he arrived home we had a coffee before popping on our walking shoes and venturing out for a longer walk than normal. As it had been a bit wet overnight we kept to the pavements and headed in the direction of a local garden centre that has a lovely cafe called Piptree Cafe.

It was a 2.2 mile walk which we managed in 40 minutes and then we had the same journey home again. The day was rather grey and looked like it could rain at any minute so we went out armed with an umbrella and rain coats and needed none of them! Typical!

After a bit of brunch we had a decidedly lazy afternoon. It was raining off and on and Simon had his latest piece of digital art that he was desperate to get completed. I had a few online bits to do but then spent the remainder of my time just chilling and watching some TV and some YouTube.

After a very lovely keto dinner of black pepper chicken stir fry we settled down for the evening to watch a couple of Drag Race shows. We had the final of All Stars Season 7 which has been phenomenal to watch and in our opinion the right queen won. And then we started watching the second series of Drag Race Down Under.

The day started a little later than usual and after a coffee we decided that a walk was very much needed. Not sure what was up with me this morning (and the majority of the weekend if I'm honest) but I was struggling to feel motivated and actually felt quite grumpy. I'd hoped that getting out for a walk might have lifted my mood but I'm not sure it made any significant difference.

It was another grey day following rain over night and again looked like it could rain at any moment, although it was surprisingly warm. We kept to a flatter route and tried to avoid too many wet fields but we still clocked up 3.5 miles in 1 hour and 6 minutes.

While I had the exciting task of updating our online grocery shopping ahead of collection tomorrow Simon was focused on cleaning up his recent set of 3D prints. This involves sanding the pieces to remove any lumps and bumps that shouldn't be there along with smoothing out the lines that appear with a 3D print, followed by the application of a resin filler to fill in the gaps and help create a smoother surface.

I made a start on my newest jigsaw which by the power of Amazon was ordered yesterday and had arrived by late morning. I have still not found the missing piece of my last jigsaw so have packed it away in the hope that it may show up at some point in the future. But today I was able to get the edge completed of my new Winnie the Pooh themed one... 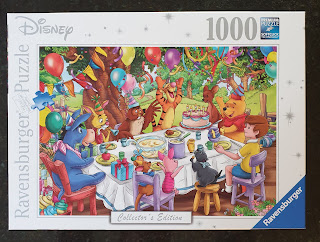 Simon has been able to hook up a special camera to his 3D printer which means that he will be able to keep an eye on the printer from wherever he may be, which as the printer is at the opposite end of the house to where Simon normally works is going to be pretty useful. He can even control the printer from the app that runs along with the camera! It's a nice safety feature to have in case a print gets too hot (although it should shut down automatically) or if it starts to misprint. This way Simon will be able to avoid unnecessary errors and the waste of printer filament.

And then for the first time in like forever we had our Disney Dream Girls Sunday meet-up/quiz. We started doing a weekly quiz on a Sunday sometime in 2020 when the world was going mad and we'd been pretty good at making it a regular weekly occurrence but as life became more 'normal' and our lives resumed it had become harder to find time when everyone was free to 'meet up'. Since out last meet-up it would appear Zoom have reduced the amount of free time you have to chat and so our little chit chat was cut short and we didn't even get around to having the quiz element! But we have put next Sunday in our diaries and so hopefully then we will be able to chat and quiz!

OK, I think I will sign off and see you all tomorrow.
xx