We have now reached the penultimate full day of our vacation, day 13.

So what did today bring us?  Well it started off with a boat trip across Bay Lake to the Contemporary Resort...

So for anyone who doesn't know what Tonga Toast is let me explain.  It's a THICK slice of sourdough bread that is stuffed with bananas, deep fried and then coated in cinnamon sugar and it is AMAZING!! We chose to visit Capt. Cooks and had breakfast there but you could, if you wanted, push the boat out and eat at the Kona Cafe but as we had the Quick Service Dining Plan we were more than happy with Capt. Cooks. It also reminded Simon and I of the year we first stayed in a Disney Resort (Port Orleans French Quarter) and on our first morning we had breakfast here at Capt. Cooks, although back then we were unaware of the lure of the Tonga Toast!  But from now on this will be a must do for all of us.

After we had stuffed our faces we decided to have a wander around the Polynesian and soak up the atmosphere... 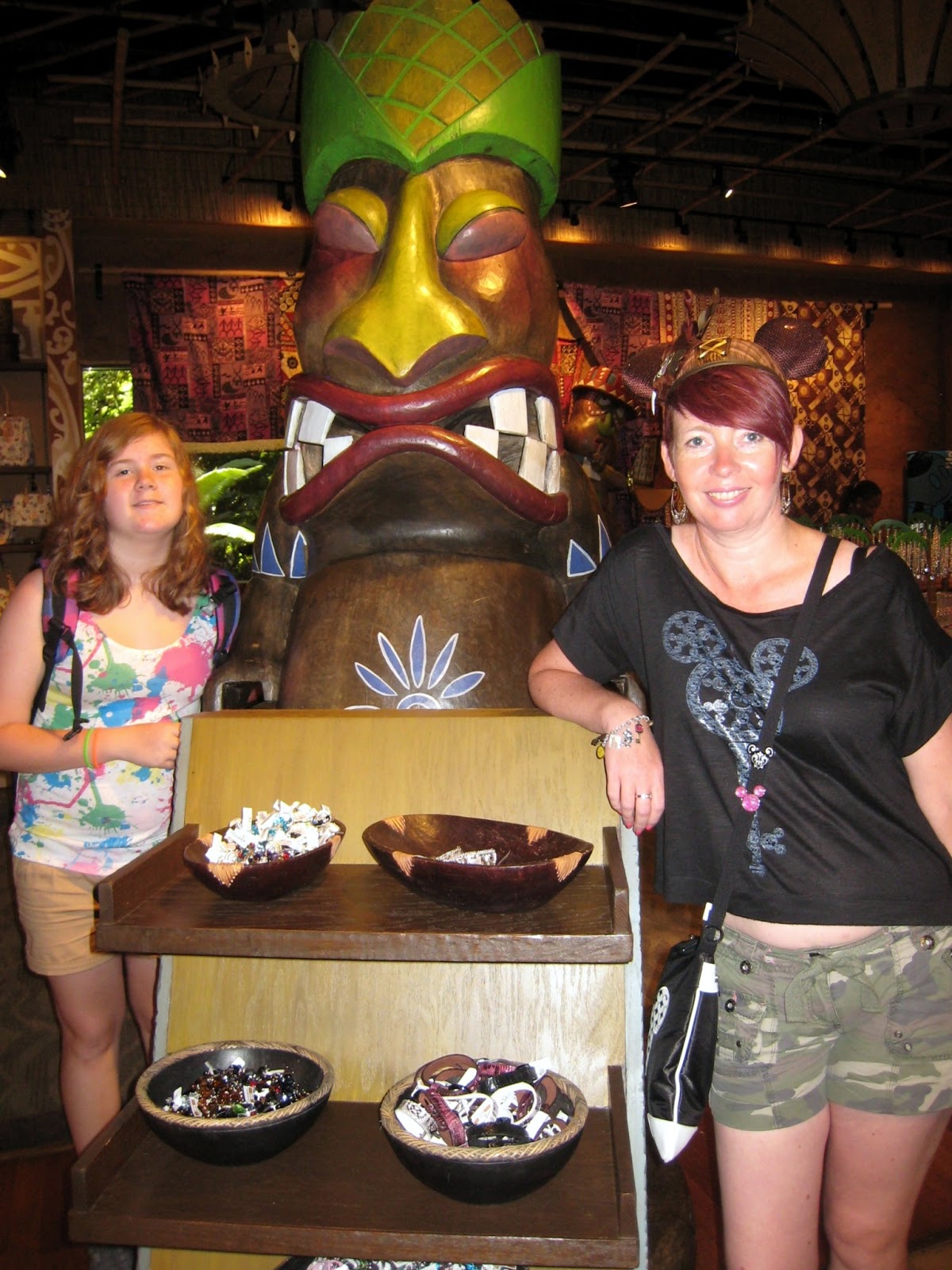 We then hopped back onto the monorail and headed off in the direction of Epcot.  We decided to head over to the World Showcase with a little detour first to get Fastpasses for Test Track later in the day.  We headed over to The American Adventure and were lucky enough to catch a performance by the Voices of Liberty; this is one of my favourite attractions and a must do every trip.  We were lucky enough to do the Backstage Magic tour a number of years ago that took you behind the scenes at The American Adventure which really gives you an appreciation of all that is involved with an attraction like this.
As it was now about lunch time we headed to one of our favourite counter service restaurants - Katsura Grill in the Japan pavilion.
After lunch saw the kids partaking in yet some more Phineas & Ferb: Agent P's World Showcase Adventure.  This time we headed to the United Kingdom pavilion, although the kids were rather perplexed at the choice of tea during one of the clues...chai tea...mmm perhaps not our choice for a typical British tea!!
And of course whilst in the United Kingdom they just had to have their photo taken in the traditional red telephone box...after all the chances of finding an operational one in the actual United Kingdom are few and far between.  We do have one where we live but it has been turned into a tourist information point and has leaflets and maps on the surrounding area but no telephone!
It was then time to head over to Future World and use our Fastpasses for Test Track followed by a ride on 'The Seas with Nemo and Friends'.  We had a quick walk through Innoventions before making our way over to The Land pavilion and Sunshine Seasons for a spot of something to eat, which for me consisted of some lovely grilled salmon and strawberry shortcake - yummy!
We then took the monorail from Epcot to the TTC (Transportation & Ticket Centre) and then over to the Magic Kingdom.  It was 'Extra Magic Hours' this evening and the park would be open until 3.00am!!!
One thing we had not yet tried but that was on my 'to do' list was the cinnamon roll over at Gaston's Tavern. Now previously the Main Street Bakery had been THE place for cinnamon rolls but since the re-vamp and Starbucks take over the rolls had been removed from the menu but had emerged on the menu at Gaston's Tavern in New Fantasyland.  They were as yummy as ever but I swear they've grown in size!!
Had to take some photos of the inside of Gaston's Tavern because the theming inside here (and all of new Fantasyland) is fantastic! 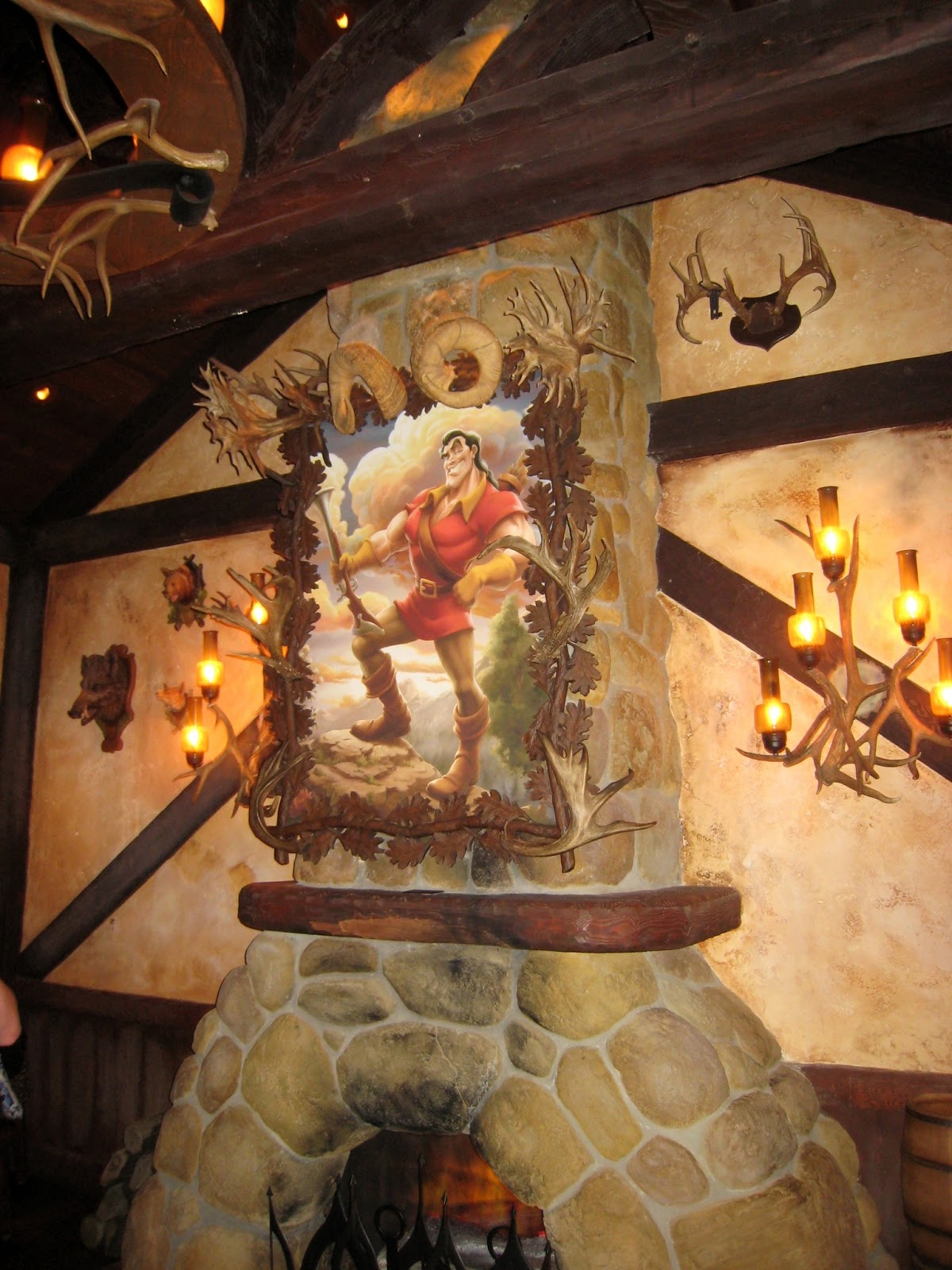 The rest of the evening was spent with a ride on the Haunted Mansion and plenty of shopping!!  Although when it decided to rain the shops did get rather busy and put a bit of a damper on my shopping experience!  But thankfully the rain cleared so that we were able to watch that evening's premier performance of the Halloween version of 'Celebrate the Magic', which included a number of Disney villains!  The advantage of taking our vacation at the end of August meant that as we were now into September (the first to be exact) we got to experience a little of Halloween Disney style.

We finished the evening off by riding the Tomorrowland Transit Authority Peoplemover during a performance of Wishes.  We eventually left the park at 12.15am well and truly worn out from our day.