I thought it was about time I got back on the case with writing up our last vacation to WDW, can't believe it's a year since we were last there! But at least writing this blog helps to re-live the memories and keep me going until we can next visit (I have no idea when this will be yet!!!)

So here we are at Day 12...so what did we do?  Well the mad one in our family, my husband Simon, decided to get up and out early and go for another run between the Wilderness Lodge and Fort Wilderness Campground; not a long run by his standards but enough to keep him in training as he had a half marathon to run only a couple of weeks after we returned home. But after that the day started with breakfast in the sunshine; what better way to start the day?!

We then headed over to Animal Kingdom to catch up on a few things we hadn't had chance to do yet.  Our first stop was to take the Wildlife Express Train over to Rafiki's Planet Watch and visit Conservation Station. 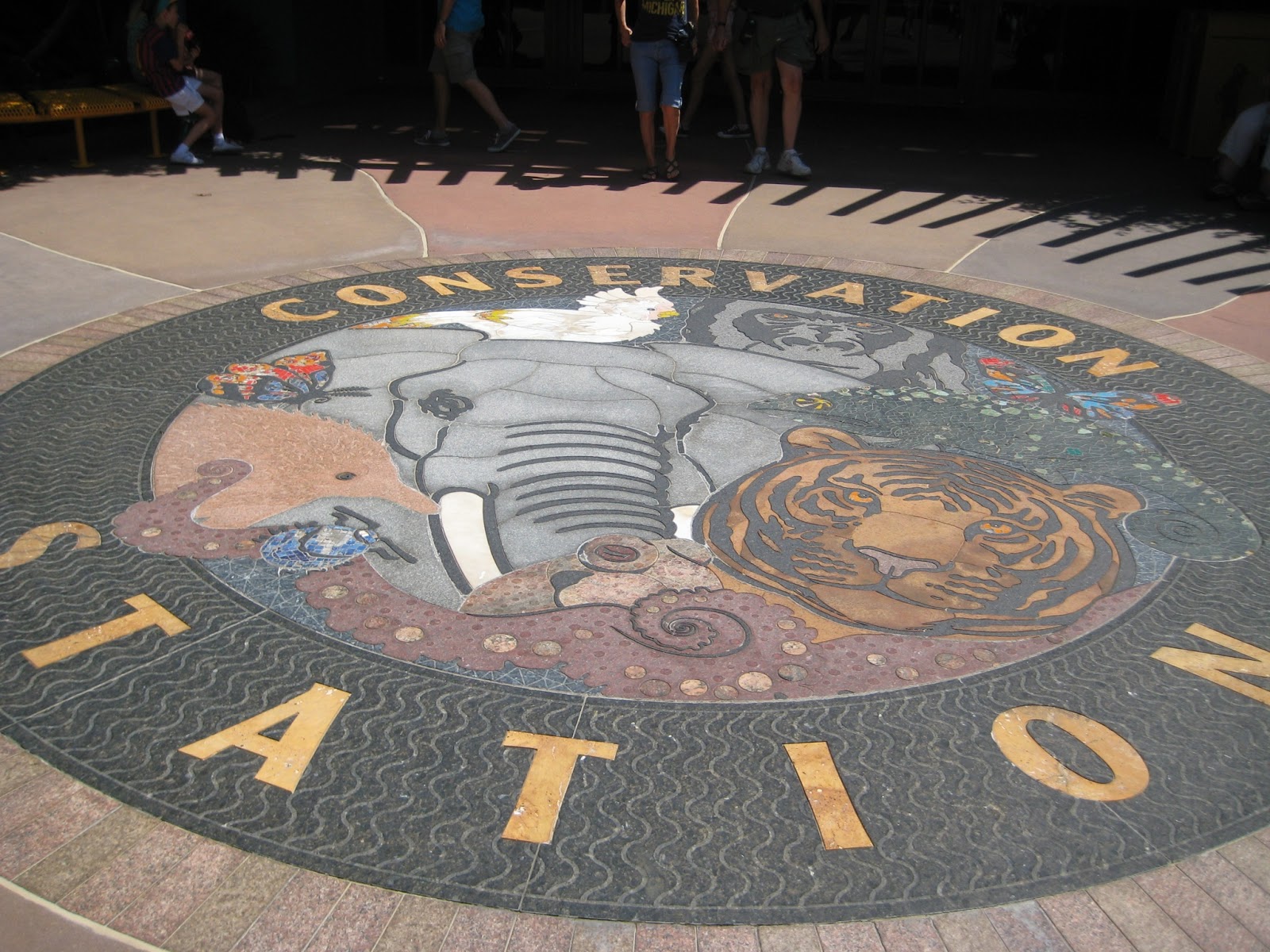 This was an area of the park that we had never visited before and is an area that you can choose to spend as little or as much time there as you like.  It gives you a greater appreciation of all the work being carried out on a daily basis to look after and nurture all the animals within the Animal Kingdom.  It is also a less crowded area of the park and along with the train ride is a nice diversion from all the hustle and bustle elsewhere.

So after finding out about the behind the scenes at the Animal Kingdom we thought we would jump aboard Kilimanjaro Safaris.  This was the first time we had rode this attraction since the storyline of 'poachers on the reserve' had been dropped...and I have to say I enjoyed it so much more!  The guide we had was great and it really felt more like a trip around the outback somewhere with the pace of the journey much more dictated by the animals that we could see.  We all really enjoyed our trip and managed to see a good array of animals, with some good close-up experiences of rhinos, ostrich, elephants and some baby giraffes.
By now the kids were itching for some thrills so off they went to get soaking wet on Kali River Rapids whilst Simon and I decided to just have a wander and soak up the atmosphere, which at Animal Kingdom is truly exceptional.  It also gave us chance to take advantage of our Photopass+...
The kids were into full thrill mode now and headed off to Expedition Everest... 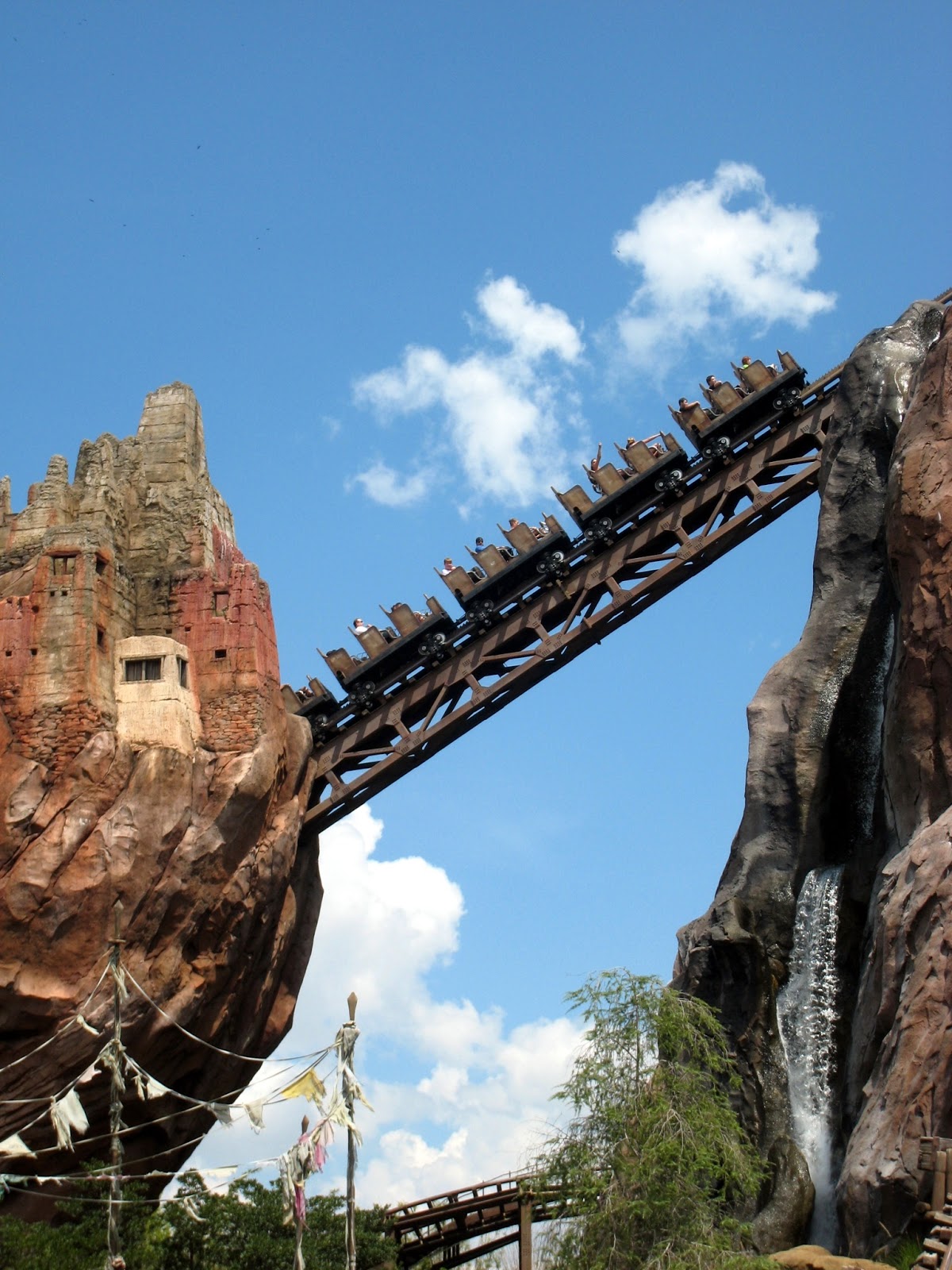 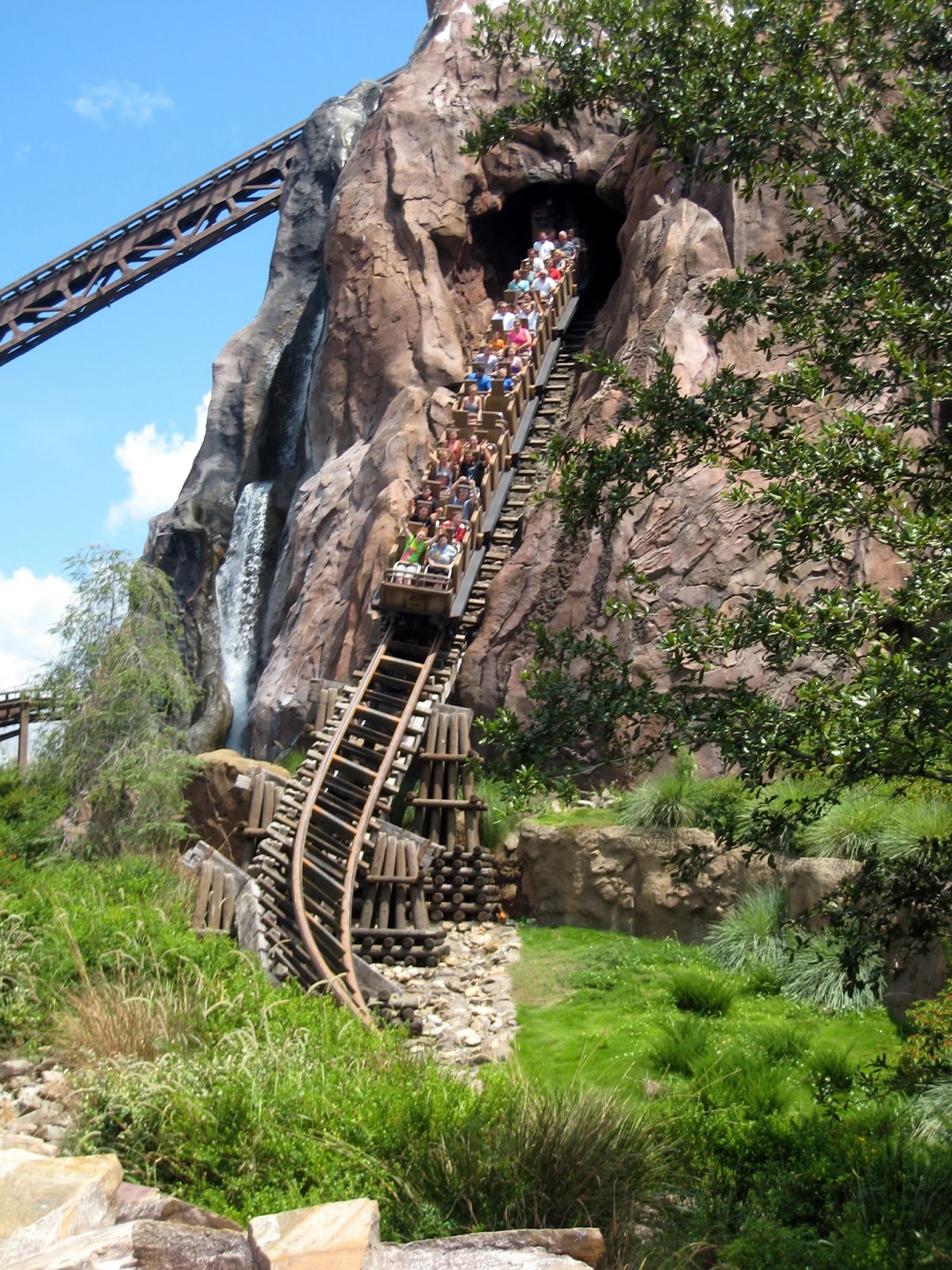 Trust me the kids are on both these photos!!


But whilst we waited for them we took a walk over into Dinoland USA and had a little perusal of the shopping opportunities.  I finally picked out a new phone case (I'd been looking at them every time we went into a shop and been struggling to make a decision!) and when Simon returned from paying for it he'd bought me a couple of Cutester Vinylmations as a surprise - ah!!

By now it was time for lunch and we headed over to Pizzafari in the Discovery Island section of the park.  It was our first time eating here (our usual 'go to' tends to be Flametree Barbecue) and actually we were quite impressed.  We had a mix of salads and pizza and chocolate mousse and cheesecake and we all really enjoyed what we had. The restaurant wasn't overly busy so we were able to grab a table in a relatively quiet corner and really enjoy our time there; we loved the bright and bold decorations throughout; in fact the room we were in seemed to have a theme of animals that hang upside down with painted murals of sloths, bats and monkeys - absolutely fantastic.

After lunch we headed back to the Wilderness Lodge and while the kids chilled out at the hotel Simon and I decided to go exploring and walked part of the route Simon had gone running along between the Lodge and the Fort Wilderness Campground. 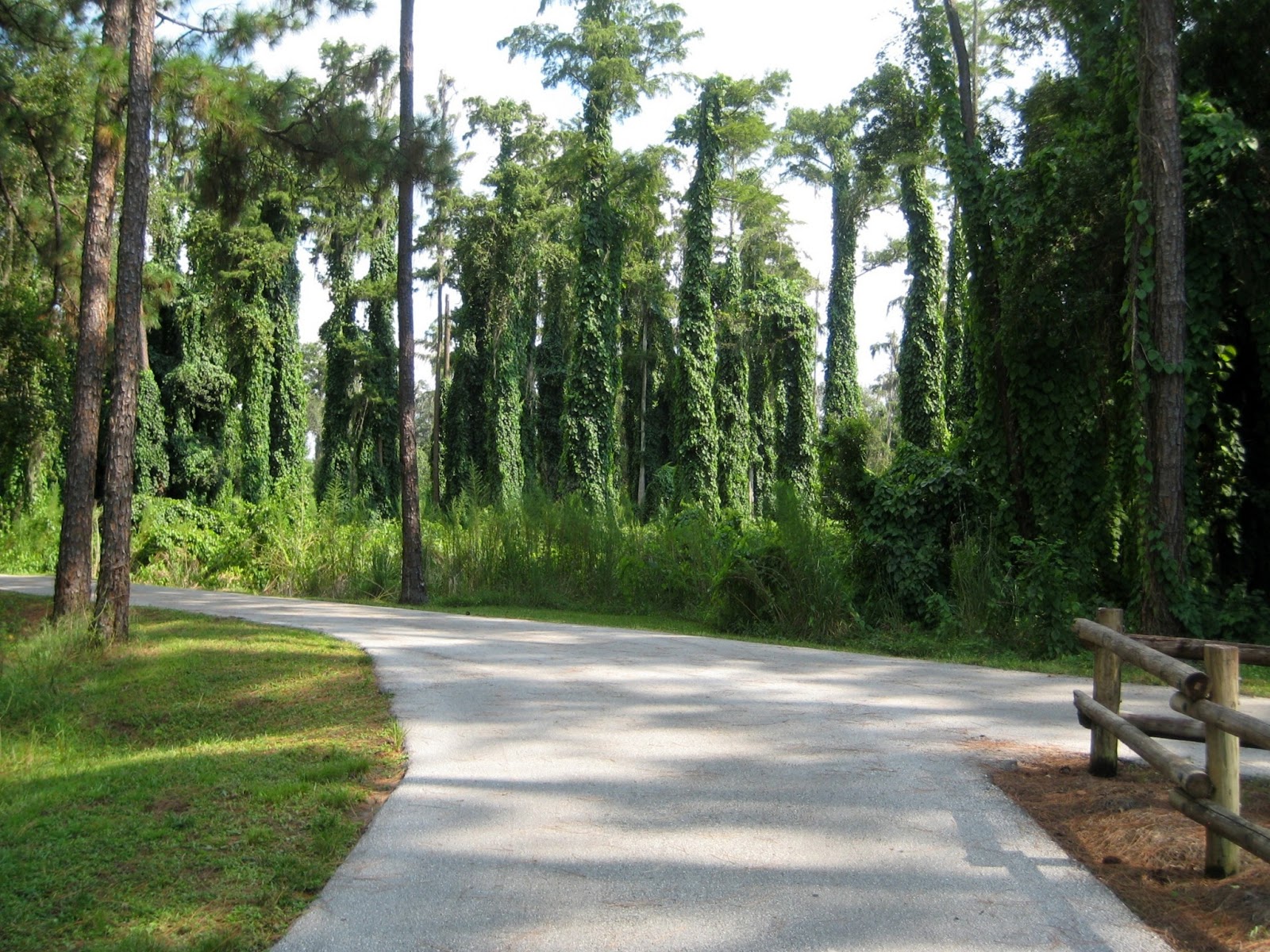 We had a lovely wander around Fort Wilderness taking in the dock area, Tri-Circle D Farm and the Meadow Trading Post shop. 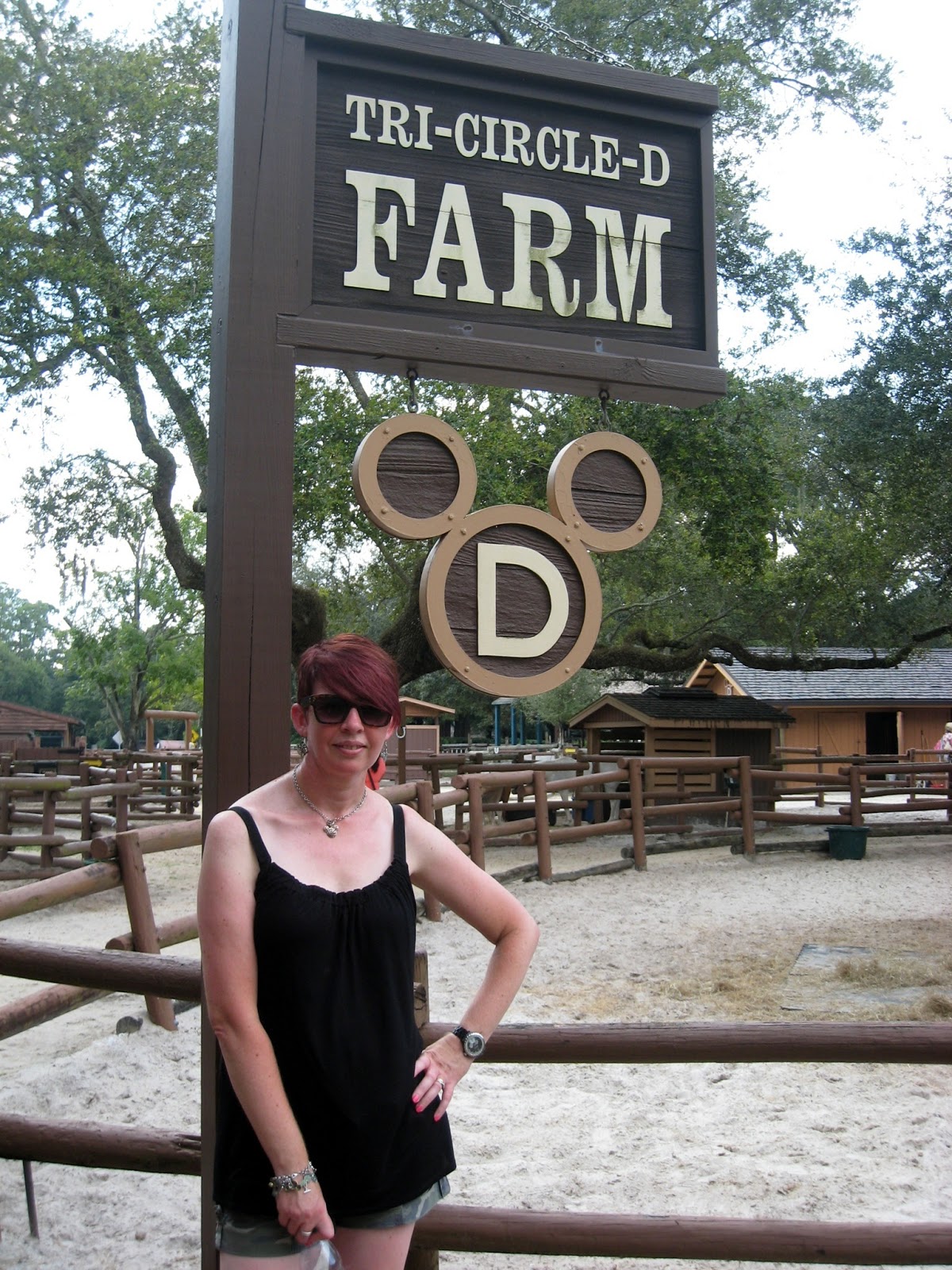 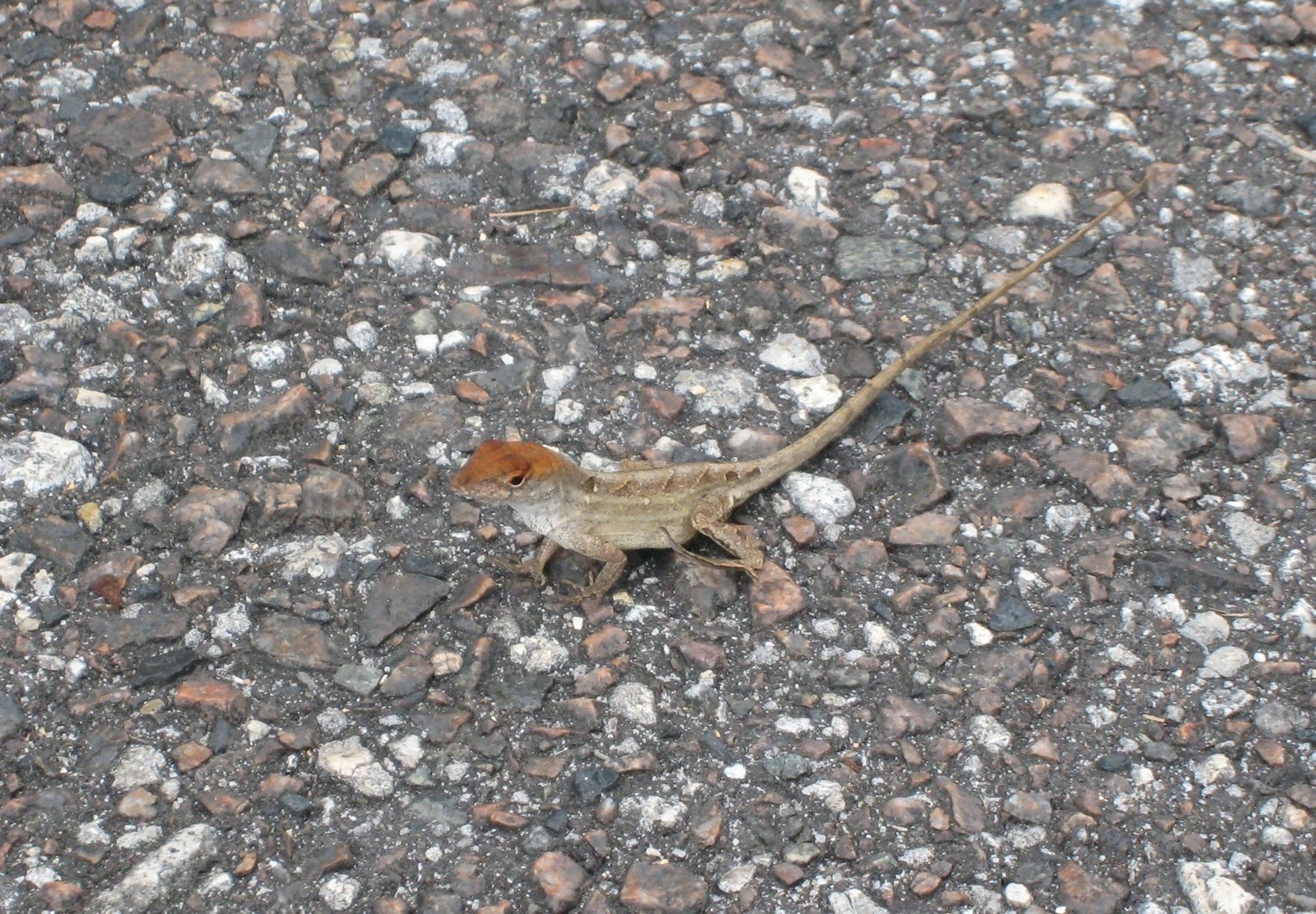 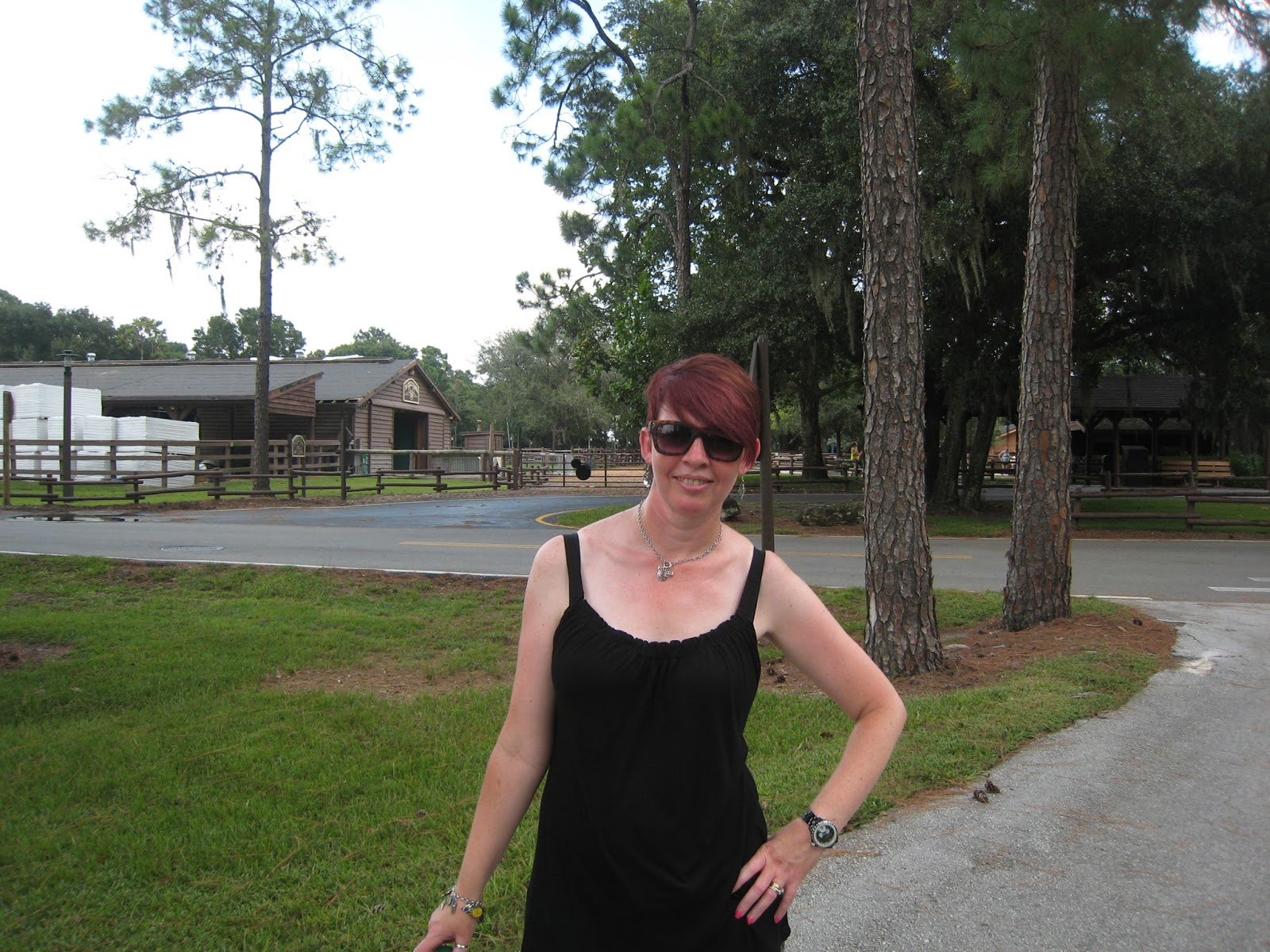 And look what we saw on our walk back to the Wilderness Lodge... 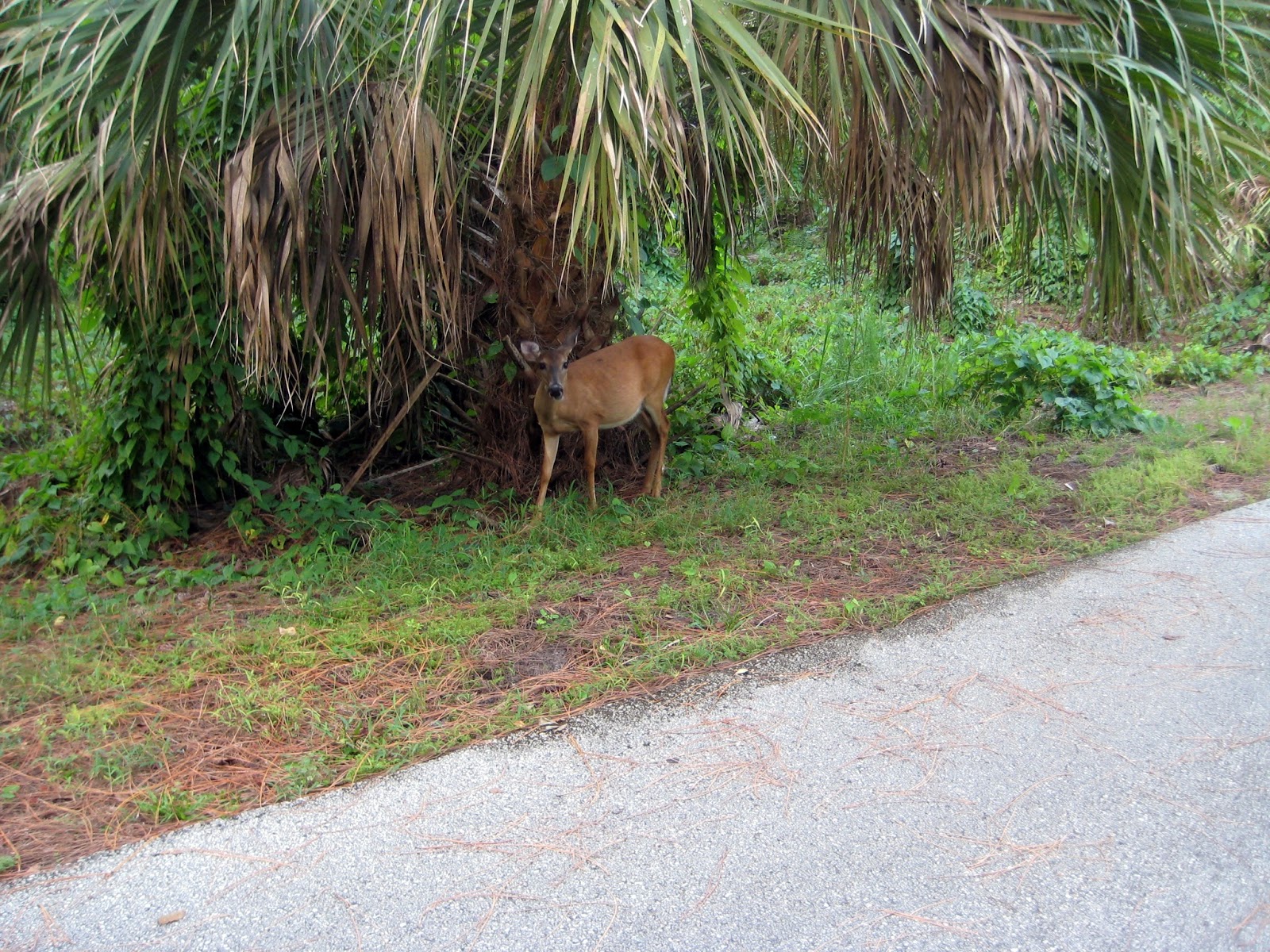 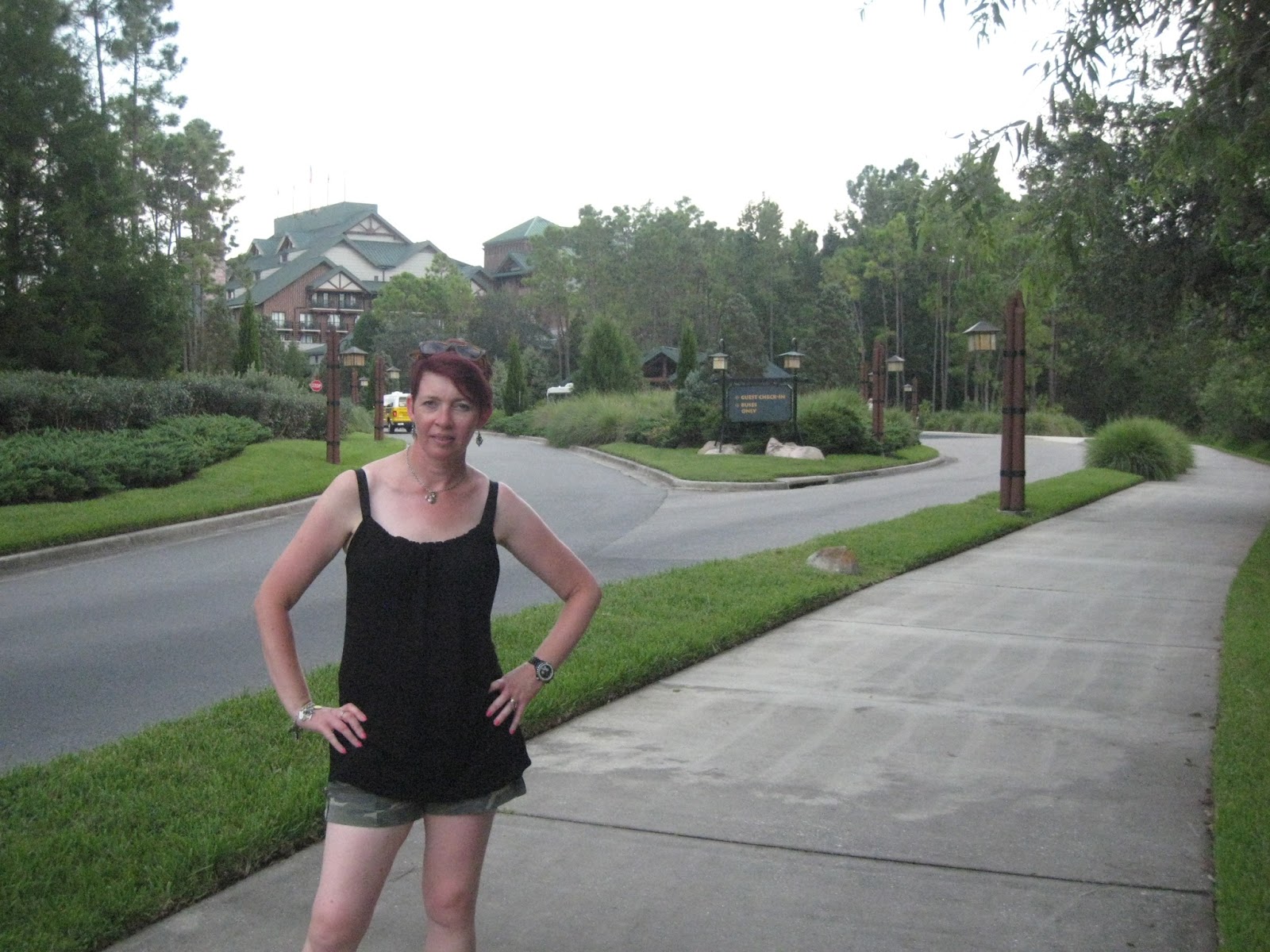 ...just before the rain came!!

So we decided to wait out the rain before taking a boat to the Magic Kingdom; we had a bit of a wait for a boat (which was very unusual) so ended up jumping aboard one headed for Fort Wilderness Campground that then went over to the Magic Kingdom but it was great just to take the time and get chance to show the kids where the campground was and to point out the old Discovery Island!
Over at Magic Kingdom we headed for New Fantasyland... 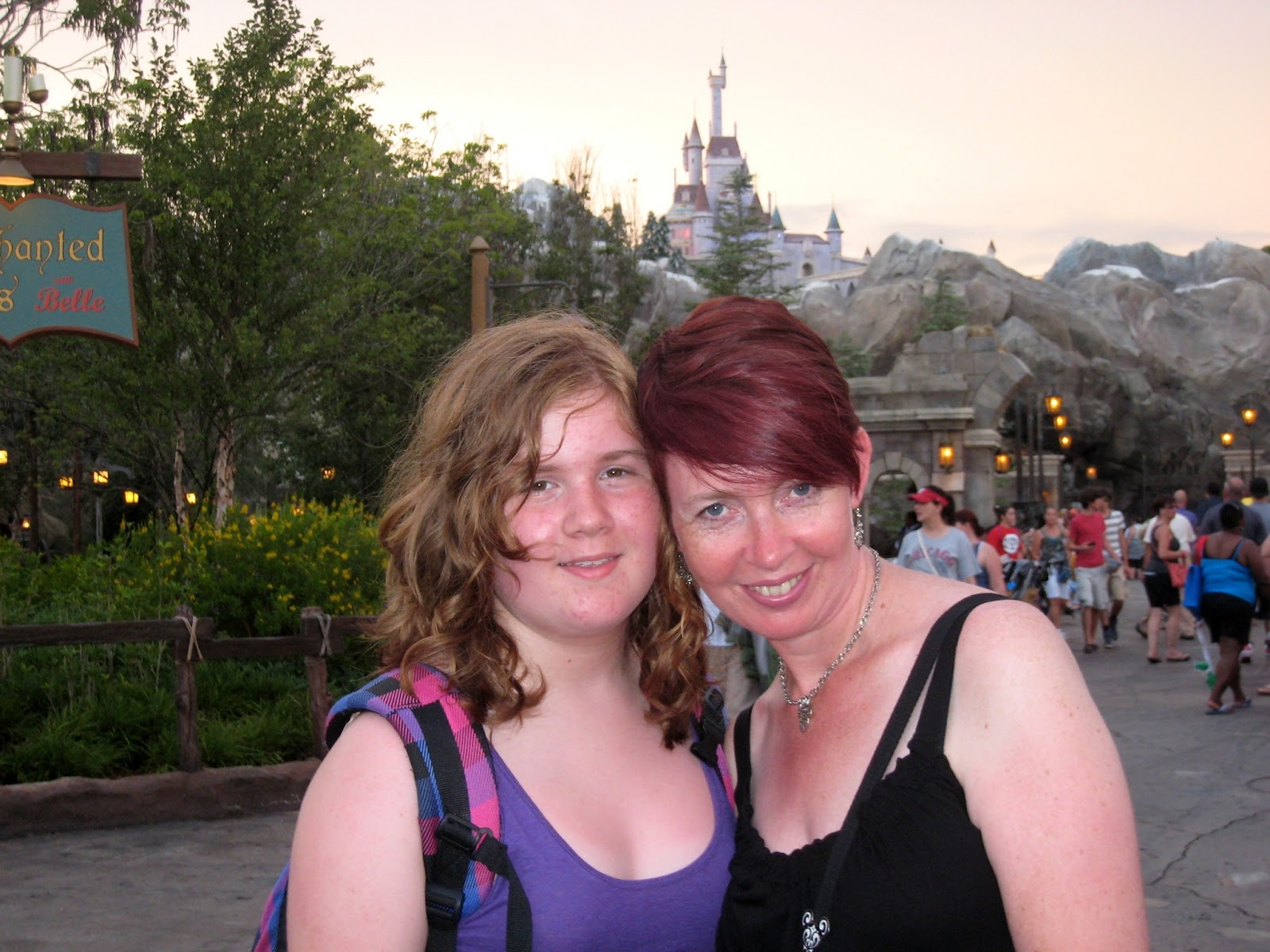 and in particular Gastons Tavern to partake in a pork shank... 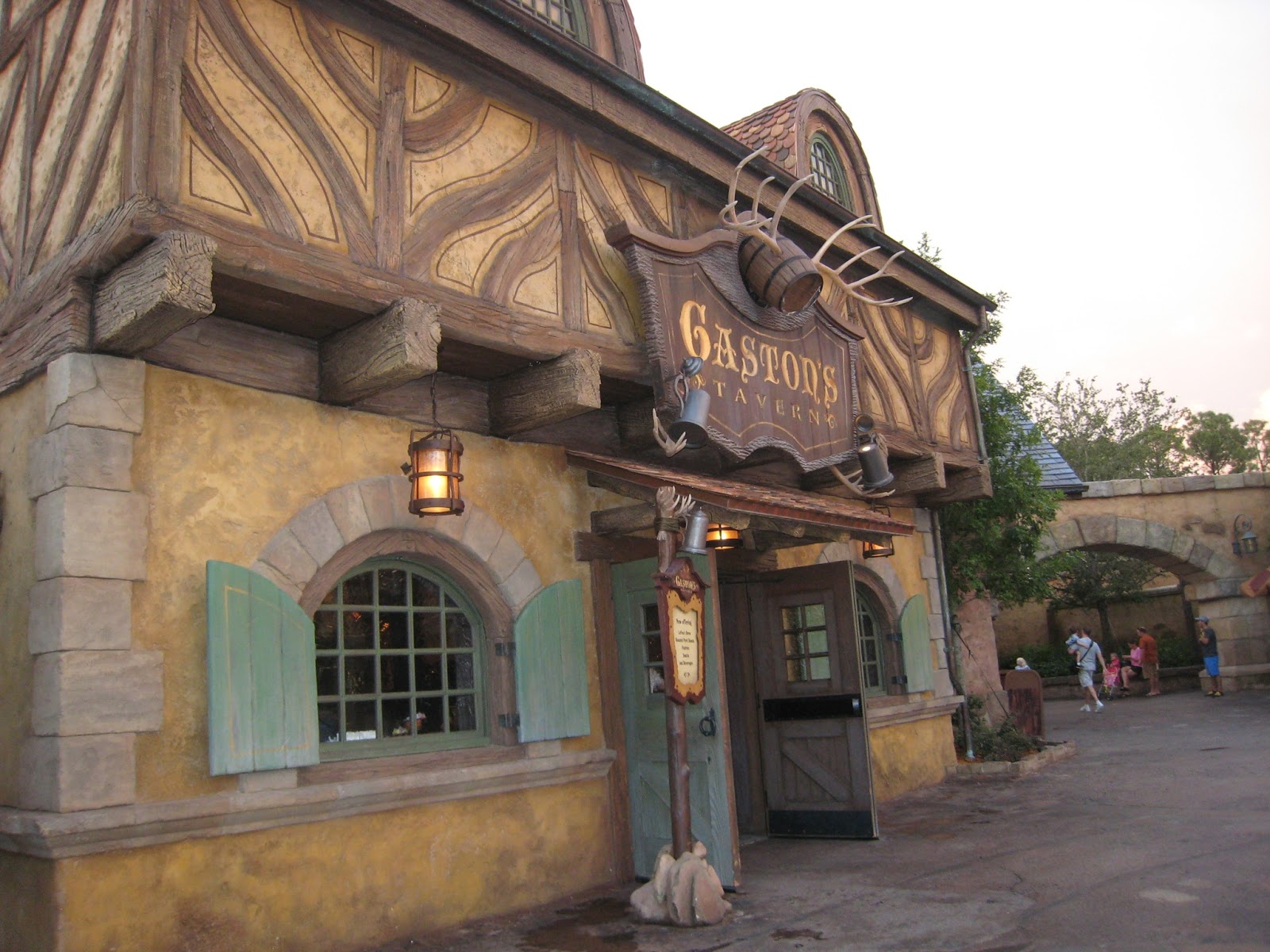 ...now I do have photos of me eating said pork shank but none were flattering enough to put on here!  And the verdict...yes it was nice, but it was basically a messy way to eat roast pork and is just the pork version of the turkey leg!  Personally I've tried it but won't be bothering again!

As we'd shared one pork shank between us we headed over to Pecos Bills for more substantial food before jumping onto Big Thunder Mountain which by this time was 'in the dark'! The kids then managed two rides on Splash Mountain back-to-back as there was no wait at all and we then all went back on Big Thunder Mountain to ride it during Wishes, which was amazing...so much so we rode it again!
As we made our way round from Frontierland we managed to catch the second showing of 'Celebrate the Magic' from the bridge leaving Liberty Square.  Turned out to be a nice view and we caught details that we'd missed on our previous viewing.  As the park was busy we thought we'd take our time and exit through the shops but they were just too busy to be able to meander through so we decided to make a break for the exit.  The queues for buses and the monorail were heaving but we walked right up to the dock for Wilderness Lodge, got straight on a boat and were heading off before we knew it!