A Busy Time of Year

Well since I last wrote it's been a busy old time...

Work has seen us concentrating on rehearsals for our Christmas concerts as well as making props and creating scenery whilst juggling all the usual day-to-day happenings.

Friday night was our Christmas Party...an evening out at a local pub for food, drink and dancing and a good night was had by all.

Then we get to the fun stuff...decorating our main Christmas tree.  On Saturday we put the tree up in our living room; it's a real live tree and normally involves a lot of effort and some frustration as we struggle to get it straight and in the best position.  But this year we have a new tree stand, a German engineered tree stand no less.  It was so simple; the tree went in, we held it in place and hey presto one tree in exactly the right position in under 3 minutes!
This tree is all Disney...all the decorations have been collected over the years with a number bought in either Walt Disney World or Disneyland Paris.  However a number have been bought from the Disney Store either in person or online.

These were some of the first that were bought, and they were bought for me by Simon during work visits to the US in the early 1990's. 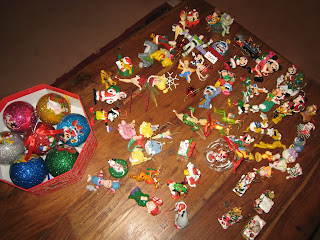 The weekend was then made complete with our daughter's guitar Christmas concert followed by a night of comedy as we went to see British comedienne Sarah Millican; who was absolutely brilliant.

The start to the week saw our first Christmas concert performance at pre-school...which went surprisingly well!  We even had some of our children stand up and do solo performances which for 3 & 4 year olds was amazing and beautiful to see.

So what will the rest of this week bring...
Posted by DisneyJayne at 21:54