So I thought it was about time I brought you up to date with my running efforts!

So after a very cold winter and being plagued with a painful chilblain on my left foot I have finally managed to get back out on the road.  My new efforts started over the Easter weekend and I have now completed 8 runs.

I am kinda picking up from where I left off last October and am doing a combination of running and walking, something I first started doing last Summer when I tackled the C25K program.  The mix of steadily increasing the running and reducing the walking worked really well for me and resulted in my being able to run for 20/25 minutes non-stop.  So when I picked up the baton again at Easter I decided to adopt a running and walking approach but rather than follow the C25K program again I thought I would just get out there and see what I could do.

So 8 runs in and I have to admit I am pleasantly surprised with myself and my efforts.  I can now run for approximately 1 mile non-stop and then finish a route of nearly 2.5 miles with a mix of walking and running.  And what I have noticed is that my running segments are getting longer!

Today Simon and I decided to try something a little different with our run, instead of doing the usual route near where we live we thought we would drive a few miles to a local country park and have a run around the grounds.  The weather was just right, a little chill in the air but the sun was shining with only a light wind.  We parked up, set our i-pods and running apps going and off we went to find our route.  The park is relatively flat and had plenty of clear paths for us to follow, so dodging pedestrians, cyclists, dogs and children we had our little run.

This was my first taste of running on different terrains, which I was a bit nervous about, but I found it was much easier than I'd expected.  It was a beautiful setting to run around, lots of greenery, gardens and even a stately home and courtyard to navigate! 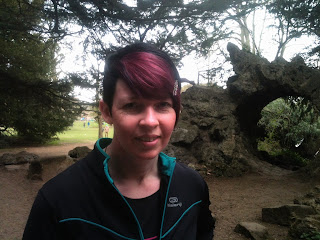 It was also good preparation for mine and Simon's first organised run event next weekend!  Simon is running a 10K and is then joining me in a 3K...I would love to run the whole 3K but am not sure that is realistic, I know I'm not far off so I will give it my best shot and let you all know how I get on.

We have decided to put our running to good use and are using the opportunity to raise funds for the Make-a-Wish Foundation UK, a charity dear to our hearts as we have previously supported the US Make-a-Wish Foundation through Simon contributing unique pieces of art for auctions run by the WDW Radio Dream Team Project.

If you'd like to support our running efforts please visit our Just Giving page at http://www.justgiving.com/PhippsDerby10k

Thank You!
Posted by DisneyJayne at 20:15