I thought it was about time to put finger to keyboard and write another little post.  Now ideally I would like to be telling you all about my running, how far I've been, how many times I've been out running all that sort of thing...but unfortunately I have nothing to report.  So without wanting to turn this post into a weather report lets just say that the British weather has not really been favourable to running.  This has been my view up and down my road for nearly 2 weeks now. 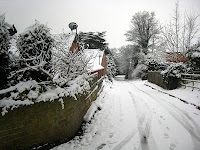 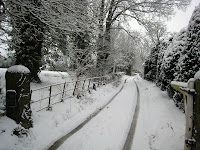 And although I have some lovely cold weather running gear to keep me warm it's not going to help keep me on my feet!!  So, for the moment, the running is on hold but I promise first chance I get I shall be out there.

I really enjoyed reading all the tweets over the WDW Marathon weekend (10th - 13th January) and the Tinkerbell Half Marathon Weekend in Disneyland (18th - 20th January). They were truly inspiring and conjured up some wonderful images of running down Main Street USA and around Epcot in particular.  Now whilst at the moment running a half marathon never mind a full marathon are outside of my comprehension I think that a 5K would be within my grasp, and if that 5K were in a Disney park what better motivation could I ask for?!  Now I don't think that's going to happen any time soon but I am looking to see if there is something closer to home that I could run, and perhaps raise some money for charity at the same time.  It would be nice to help the 'Make-A-Wish Foundation' as Simon and I have previously supported the WDW Radio Show's Dream Team Project in their endeavours to raise money for such a worthwhile cause.

Ironically the next time we are in a Disney park there will be a Disney running event happening but on the opposite coast to where we are!  Oh well, I shall just have to add it to my list of Disney wishes :)

Besides I will still be able to complete what was my initial target of running around Lago Dorado at Coronado Springs Resort!