Here in the UK we are experiencing a rather cold spell of weather...and you know how much we Brits like to talk and moan about the weather!

So here I sit in my cosy home, with temperatures set to drop to -9C overnight, we have half melted snow on the ground, ice on the pavements and icicles hanging off my garden shed! 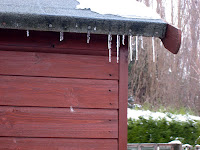 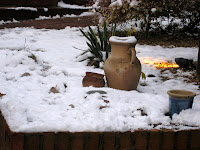 And I naturally think how nice WDW would be right now...blue skies...sunshine...warmth. An image that I think most people have about a vacation in WDW, after all it is in the Sunshine State and whilst it is true most of the time the weather, even in Florida, can throw you a curve ball sometimes!

Just before Christmas we had friends who were visiting WDW prior to enjoying a Disney Cruise; the morning they set off for Port Canaveral they were greeted with a car windscreen covered in frost, something they'd expect to see in England in December but the last thing they were expecting to see in 'sunny Florida'!

Back in 2008 we were lucky enough to spend 3 weeks in WDW, but towards the middle part of our stay we began to hear warnings about a tropical storm...the result being a lot of wet days!  But as Brits we are always prepared...we even bring along our own rain coats (no poncho's for us)...and being British we weren't going to let a bit of rain spoil our fun!

Now I have to confess that I love the thunder storms in Florida, the short heavy downpours with amazing lightening displays, and they are as much a part of the vacation as everything else.  But in 2008 the rain came down for hours at a time and one of my most lasting memories is of being at Epcot one late afternoon.

The rain had been off and on all day and it had gotten to late afternoon and we decided to take a little visit to Mexico....tacos and margaritas.  So there we were at the Cantina De San Angel when the rain started again, but we were fine enjoying our Mexican feast under the umbrellas...but as the rain came down we thought we better put our rain coats on, but we stayed and kept eating.

By this time we were beginning to get rather wet and we decided in true British style to make a break for it, but where to go?  As luck would have it the rain although still coming down had eased off so we decided to make our way to The American Adventure.  Well by the time we got there we were all rather wet; but in we went to await the next presentation.  We quite quickly realised that between the four of us we were making quite a nice puddle on the floor - oops!  So we wandered our way around the foyer leaving a trail of water behind us.  Then it was time for a comfy sit down to watch the amazing American Adventure Show (one of my favourites and 'must do' attractions) and the benefit to sitting down for 25 minutes was that we got chance to dry off, although I do feel sorry for whoever sat in our seats next!!

We then finished off the day at The Liberty Inn with a helping of apple cobbler - perfect!

And that's how happy memories are made :)
Posted by DisneyJayne at 20:21