Firstly many apologies for such a long time between blog posts, unfortunately lots of 'life' stuff has happened which has both restricted my time and my want to get on and type. But I'm back on it now and I shall continue with my adventures at Disneyland Paris from a few weeks back...so where were we?

Ah yes...we'd made it to Disneyland Paris...well the train station at least, so what did we do next?

Well, we made our way out of the station and had our first encounter with security at Disneyland Paris. As you leave the area surrounding the station and head to the parks and Disney Village you have to go through 'bag check', which will be familiar to anyone who visits Disney theme parks all over the world. At Paris they have 'bag checks' set up when you leave the train station area and also when you enter the Disney Village from the hotel area of the resort. The 'bag check' is very efficient as they use the same x-ray machines that are used in airports. Simply place your bags on a conveyor belt and collect them the other side of the x-ray machine - very simple, efficient and relatively quick.
So once we were safely through bag check we decided that rather than head straight for the parks we needed food...and there was only one place to go...somewhere we all loved and hadn't been able to experience since our last trip to WDW back in August 2013...we are talking Earl of Sandwich of course! 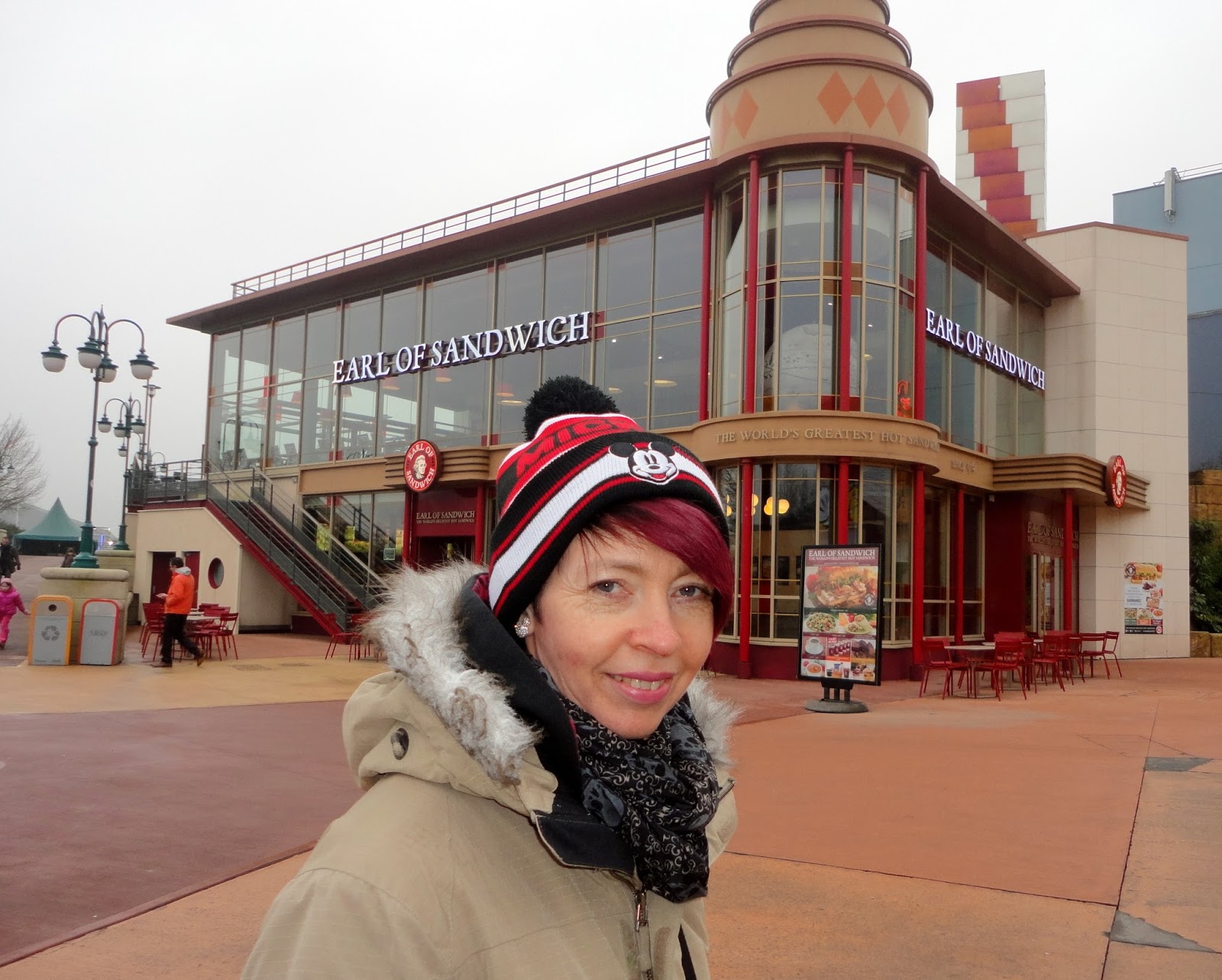 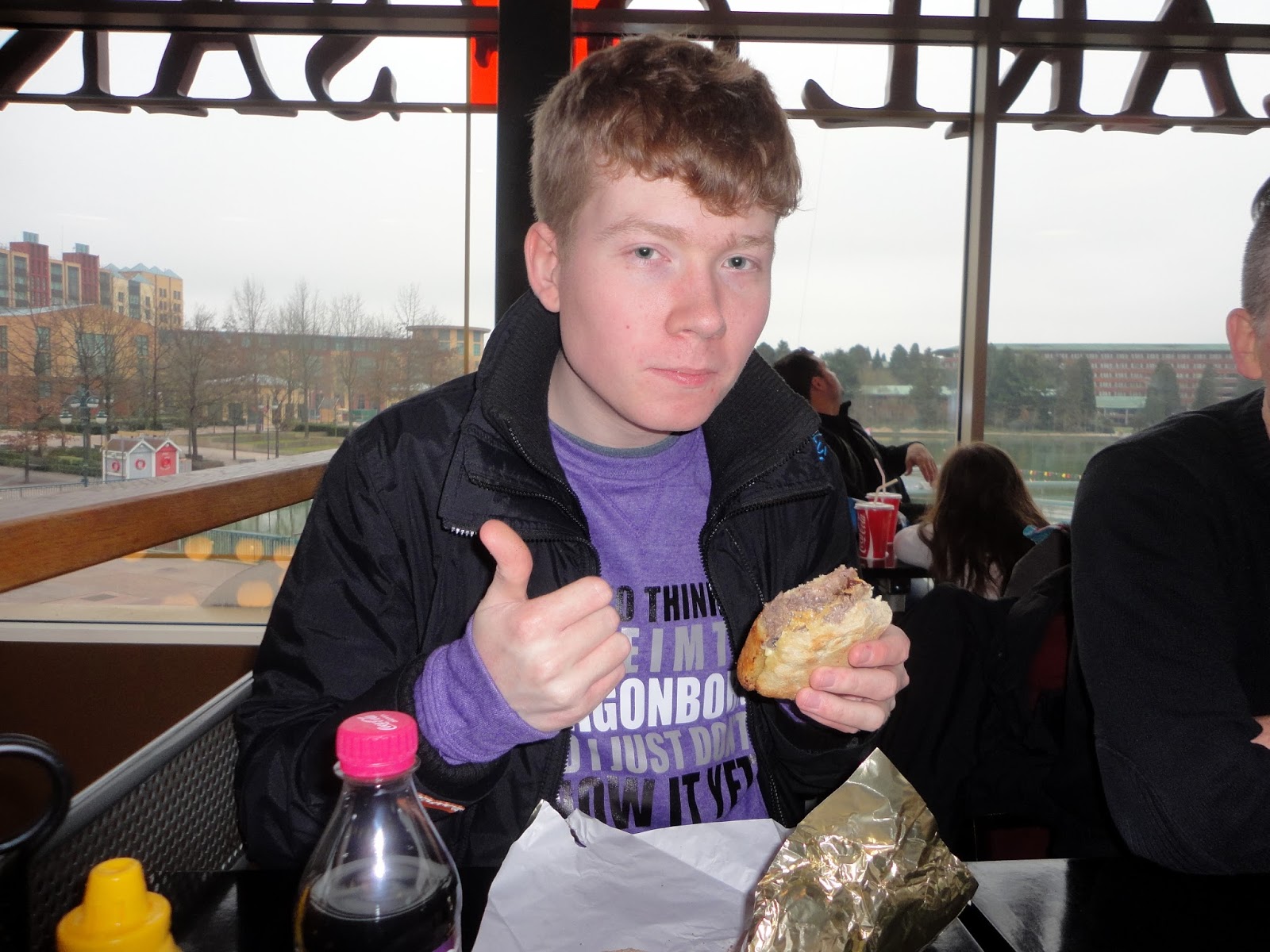 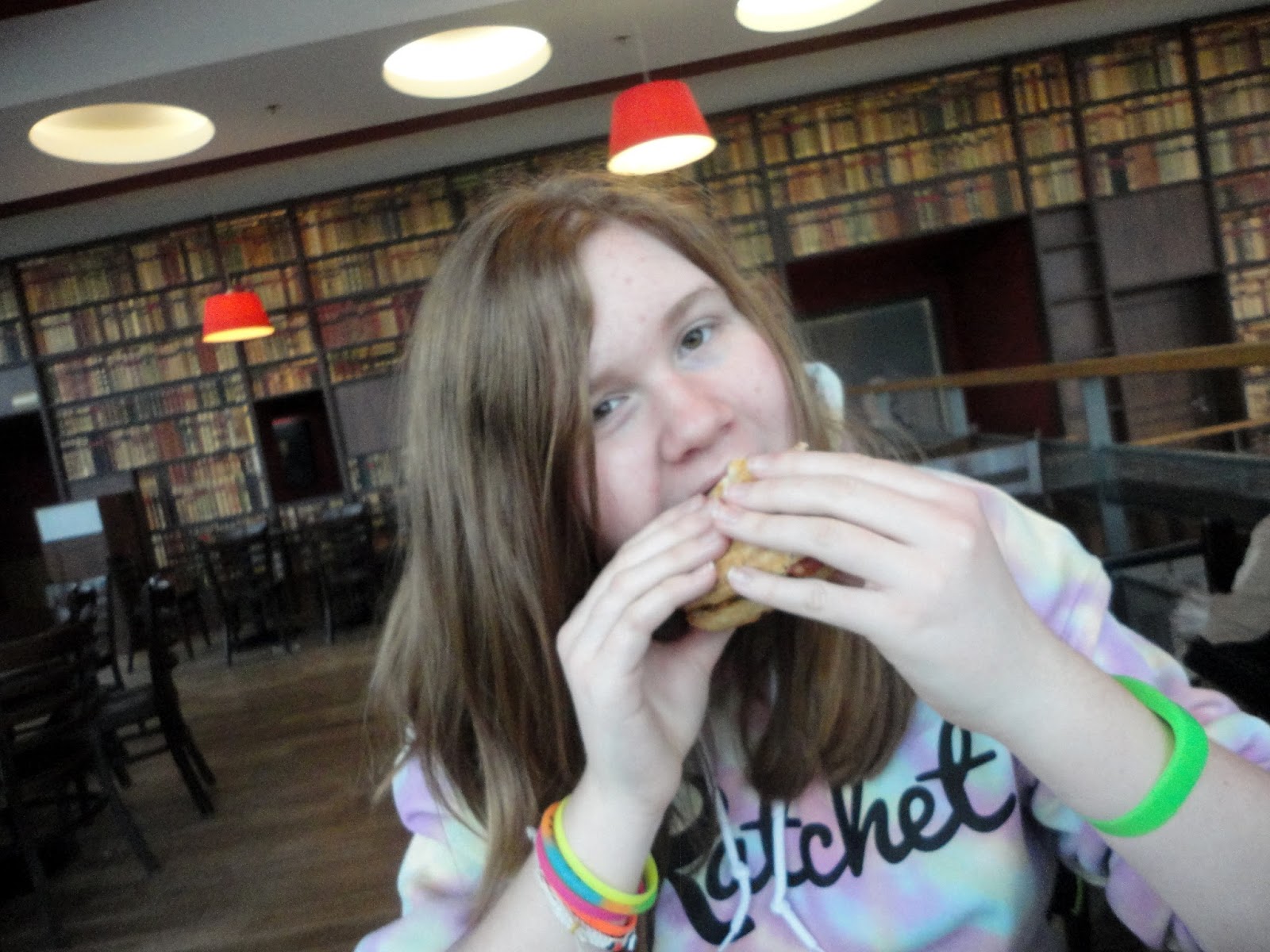 The kids enjoying their food :)
So whilst we were in the warmth of the Earl of Sandwich I took five minutes to complete the hotel check-in card which we had been given when we dropped our luggage off at the Disney Express counter inside the train station - I figured completing it now would save us some time later on.
Once the paperwork was completed, and now feeling re-energised after our food, we decided to have a wander around the shops of Disney Village. I fell in love with the Disney Fashion store and knew that I'd be back spending in there before our trip was done! I also loved The Disney Gallery shop as there were some lovely pieces of artwork to admire.

We then decided to head over to our hotel, the Sequoia Lodge, and get checked-in. 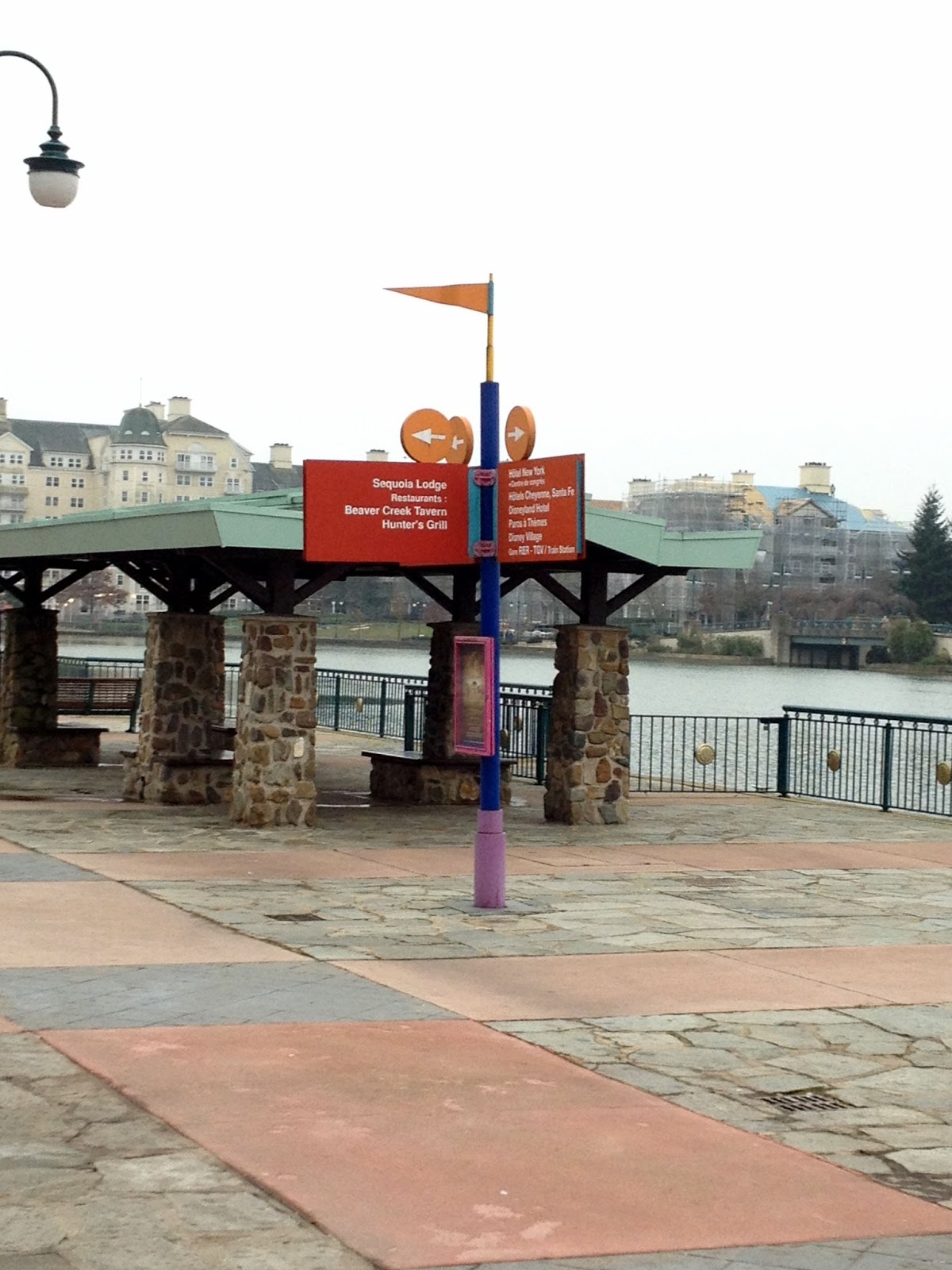 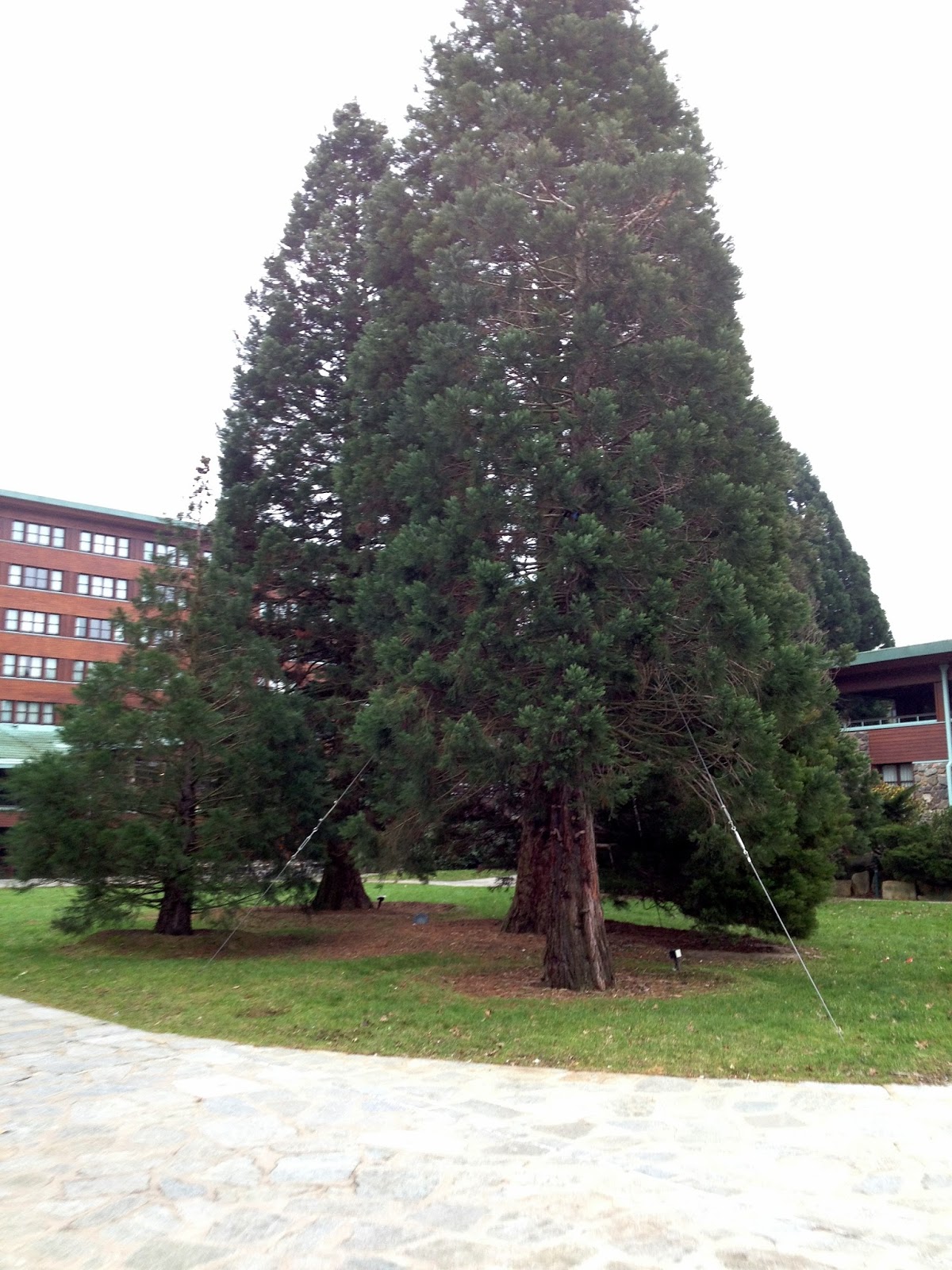 Arriving at the Sequoia Lodge.

We made our way to the hotel reception, which when you enter from the Disney Village side of the hotel is actually on the first floor, so you go up a set of stairs and walk around to the right of the main bar area in order to reach the check-in desks.

Check-in was relatively straight forward although the major difference between Paris and the US parks is the amount of paper you are given to carry around with you! First there are the park entry tickets - multi-park, multi-day paper tickets - then there is a piece of paper that is basically your hotel ID which gives you access to your hotel facilities like the swimming pool, spa, gym etc but also identifies you as a resort guest for the purposes of early park entry (Extra Magic Hours) and then if you'd like to be able to charge things back to your resort hotel there is a third piece of paper!
We also had to pick what time we wanted to have breakfast over the stay of our vacation. The package we had booked meant that a standard breakfast was included for each day of our stay. In order to manage the large number of people in the hotel wanting breakfast they operate a time system, whereby you pick a time slot when you'd like to have your breakfast for each day of your stay. This time can vary each day as once a slot is 'full' you will only be able to pick slots with 'spaces'. For each day you are given yet another 'piece of paper' by way of a coloured card that is specific to the day of the week and the time chosen, and this is needed to access the restaurant at breakfast time. We were also told that at no extra charge we were able to take breakfast in the parks and were offered a slot for one of our days. This can feel a bit restrictive, having to pick times for the duration of your stay when you have no idea how you'll be feeling each day or what plans you may decide upon. But one thing to note is that the system is really only a guide as to when you take your breakfast, we were 'late' on a couple of occasions but this didn't stop us getting our breakfast!

Oh and of course we needed a key for our room, which was a separate plastic credit card sized room key! Once we had our room key and bits of paper we headed to the Left Luggage Office to collect our luggage which had been transported to the hotel from the train station. We then used our hotel map to find our way to our hotel room.
We were in a standard room which meant that we were in one of five lodges located in the grounds of the hotel, rather than in the main building. Our lodge was called Big Sur - the others are Monterey, Yellowstone, Yosemite and Sierra. 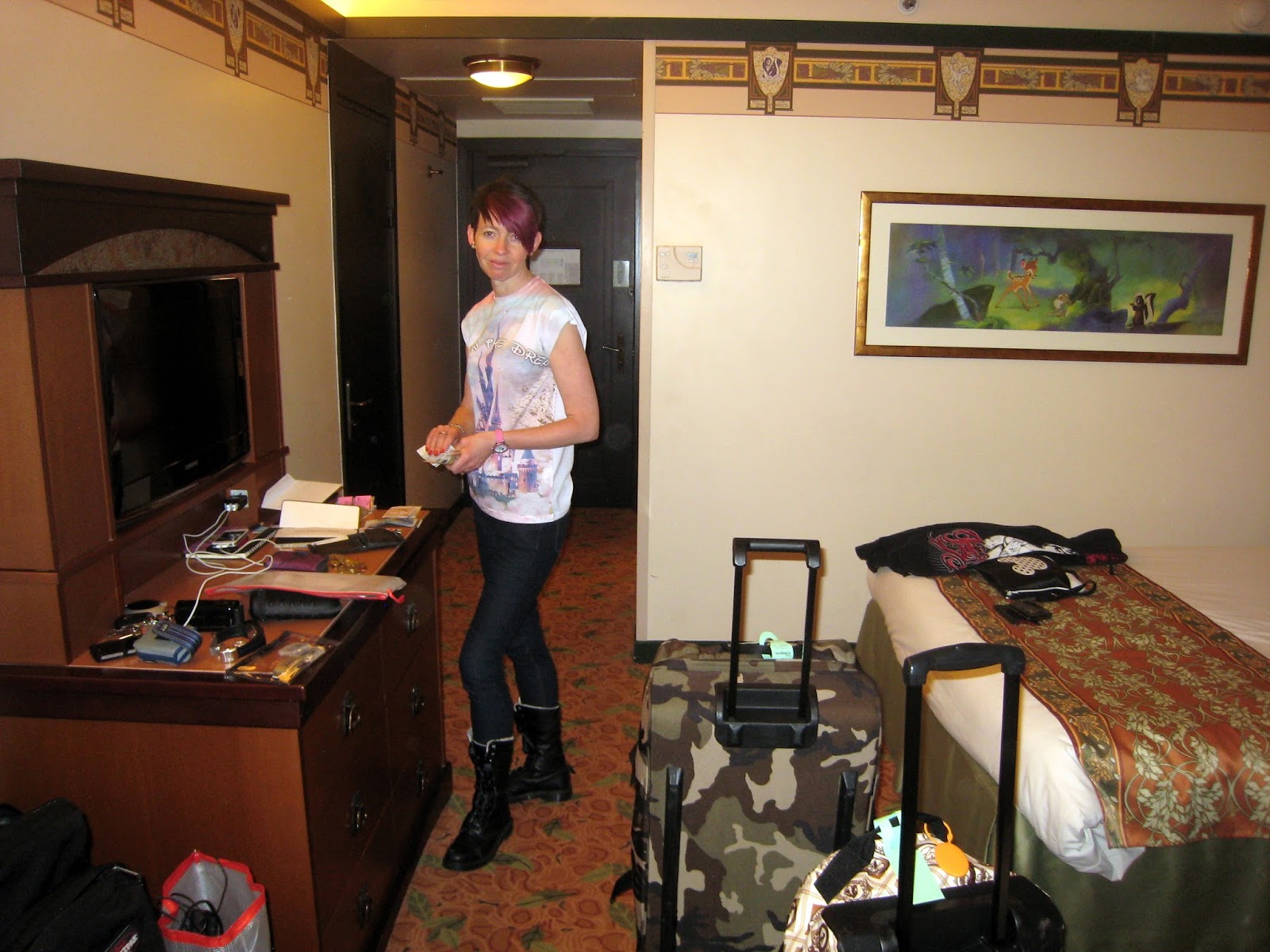 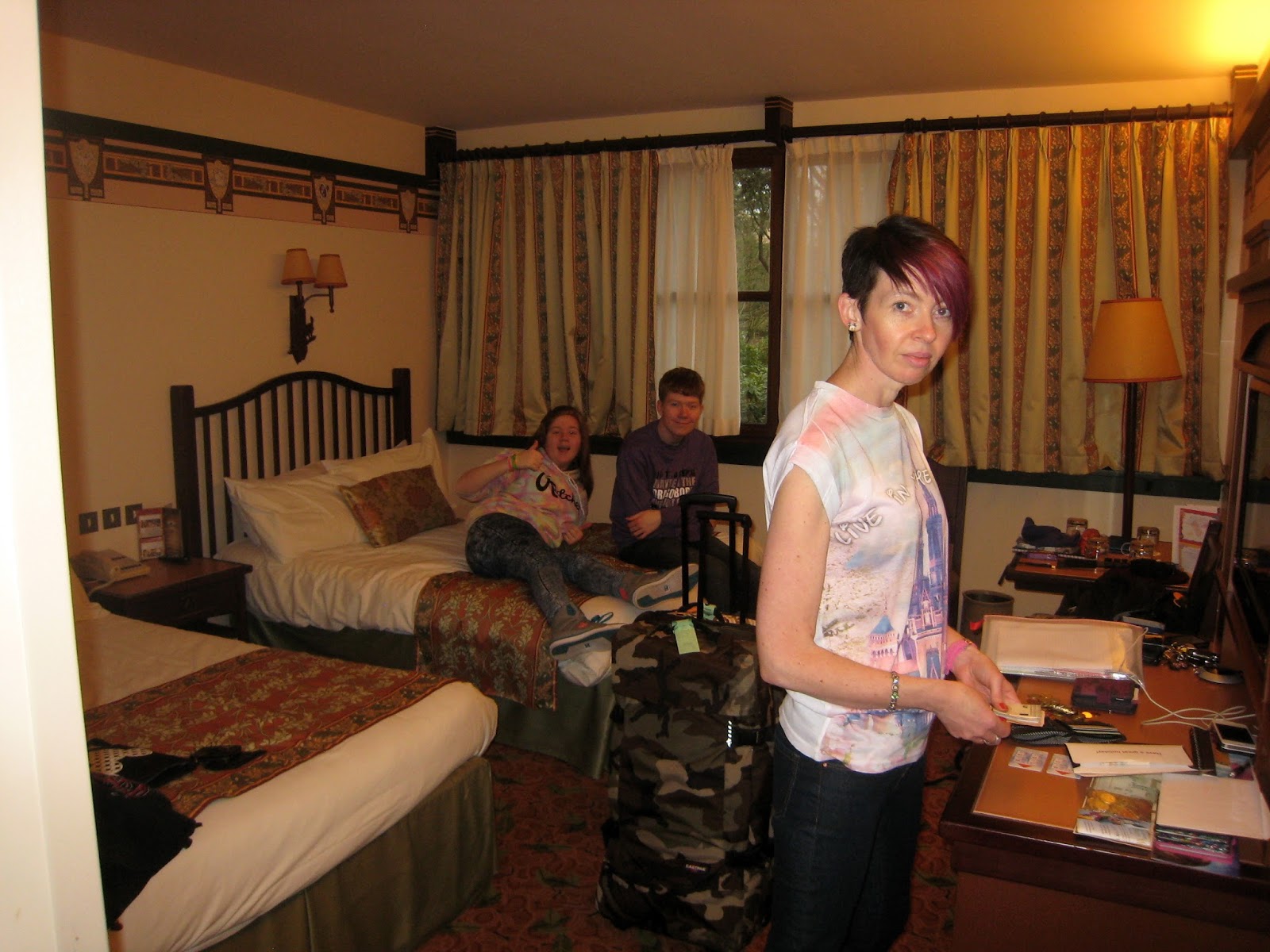 In our room, getting sorted and ready to head off out!! I think I shall devote a blog post at a later date to the hotel, the room and it's facilities.

So with dusk falling we headed off to the parks, well Disneyland Park to be precise.
Once into the park there was only one thing the kids wanted to do and that was to ride Big Thunder Mountain...so off we went. We had a 40 minute wait but we were all happy with this as we knew that this was a ride well worth waiting for. Unlike it's US counterparts the main part of the ride is actually situated on an island in the middle of the Rivers of the Far West, whilst the boarding station is in Frontierland. This means that the first part of the ride is actually in a tunnel that goes under the water, which means that the start (and end) of the ride is surprisingly dark and especially so when riding it at the time of day we did; by the time we got on the train the evening had really drawn in and we had a great night time ride!

Whilst in Frontierland we hopped over to take a ride on Phantom Manor. This is a beautifully themed and presented attraction and has it's own unique story line. Although beware it is presented in French and so it's worth reading up on the back story before hand as it will help enhance your ride experience. Certain elements of the ride are similar to other versions around the world whilst there are sections that are particular to this version; the cemetery scene in particular is amazing!

By now it was quite dark, very cold and we were all feeling in the need for food and somewhere warm! So off we set to see what we could find, unfortunately most of the restaurants we encountered were closed which we put down to the time - it was around 7.00pm and the park was due to close at 8.00pm - so what to do?  Well we took a wander through the shops of Main Street, USA to try and get warmed up before leaving the park and heading into the Disney Village in search of food. Most of the restaurants in the Village either had long queues or were out of our budget and so we ended up back at Earl of Sandwich...not that any of us were complaining!

And therein completes day one of our trip to Disneyland Paris; a long and tiring day but very enjoyable too...suffice to say we were all asleep rather quickly!!