Well it's been longer than I thought since I last posted so I thought I'd better get my writing head on and let you know what we got up to on Day 10 of our last vacation to WDW last Summer.

Well the day started a little later than I think we'd intended; we all slept really well!  So first order of the day was breakfast in the sunshine at Wilderness Lodge...by now we were getting rather used to this start to the day and loving it everyday :)

When we finally got ourselves out and about it was over to the Animal Kingdom and a day that turned out to be all about autographs.  Molly decided that today was to be full on character spotting, photos and autographs.

I think this was as a result of walking into the park and discovering Mickey and Minnie's new meet and greet as we strolled along; we noticed there was no wait time so thought that can't be right???  Anyway as we approached we were greeted by a couple of lovely cast members who welcomed us in and said 'come along, they're all yours, no-one is waiting'.  So much to our surprise we walked straight through the queue area and right into the meet and greet area.  We had a fantastic time and were able to take as long as we wanted, and we got some fab photos with Mickey and Minnie in their safari get-ups! 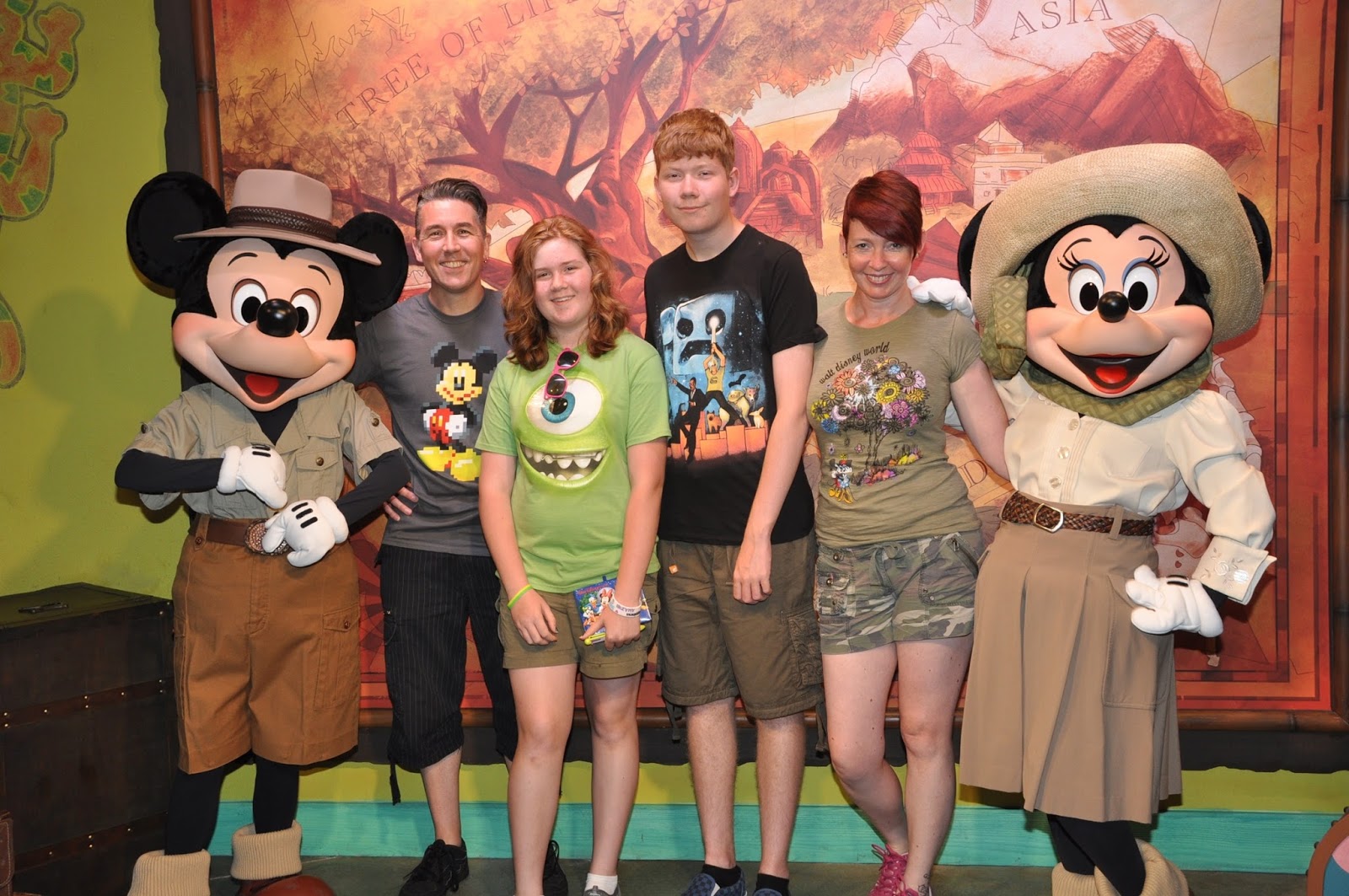 Throughout the rest of the day we managed to get photos and autographs with some of the major players; Pluto, Goofy, Donald, Chip & Dale, Pooh and Tigger which meant Molly was a happy girl.

We also hit some major rides today, well I say we...but not all of us did all of them!  First up was Expedition Everest which the kids and Simon enjoyed whilst I decided to take in the scenery and the themeing and a little window shopping followed by trying to predict which train they would be on to catch them on camera and failed! 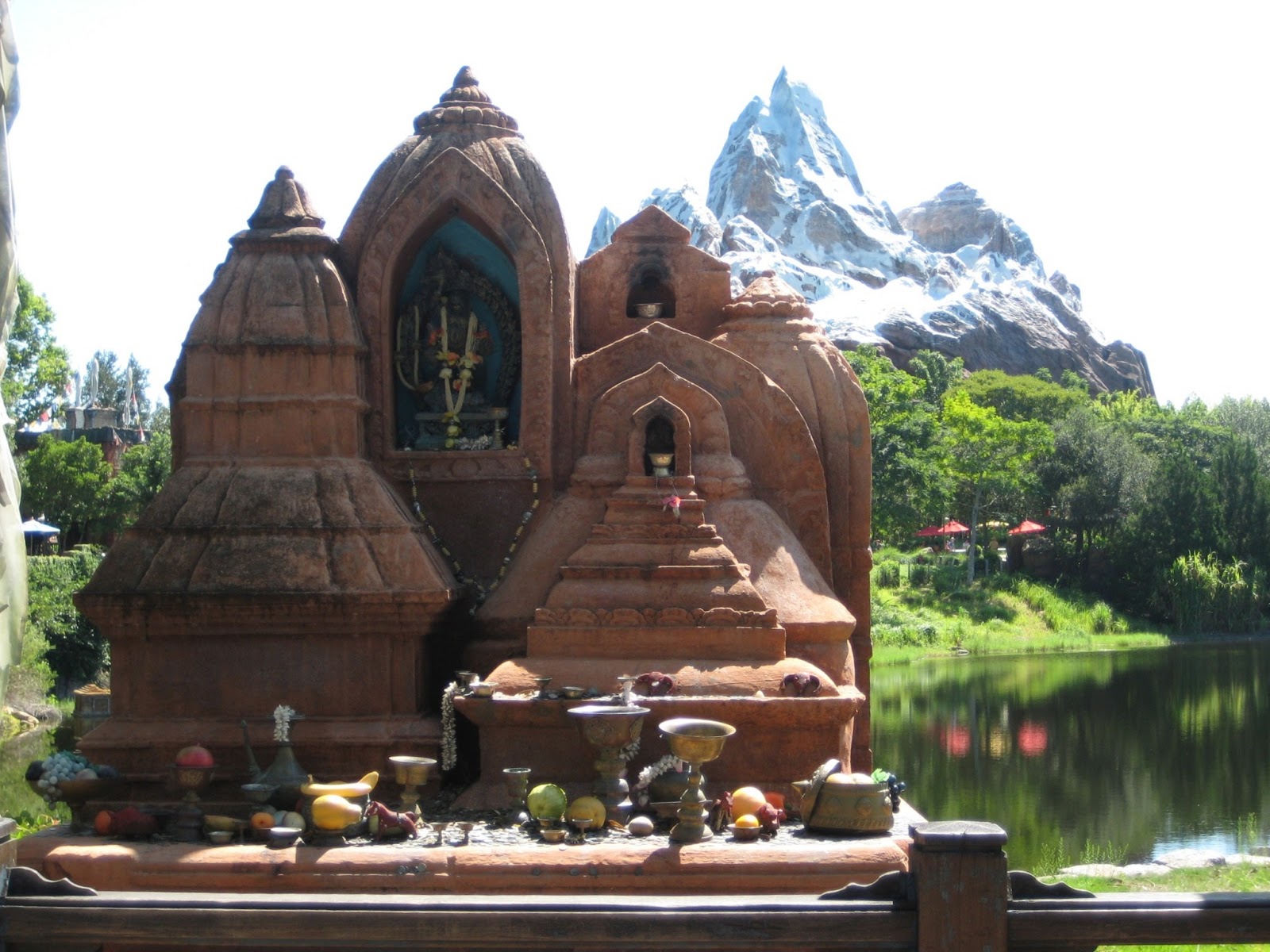 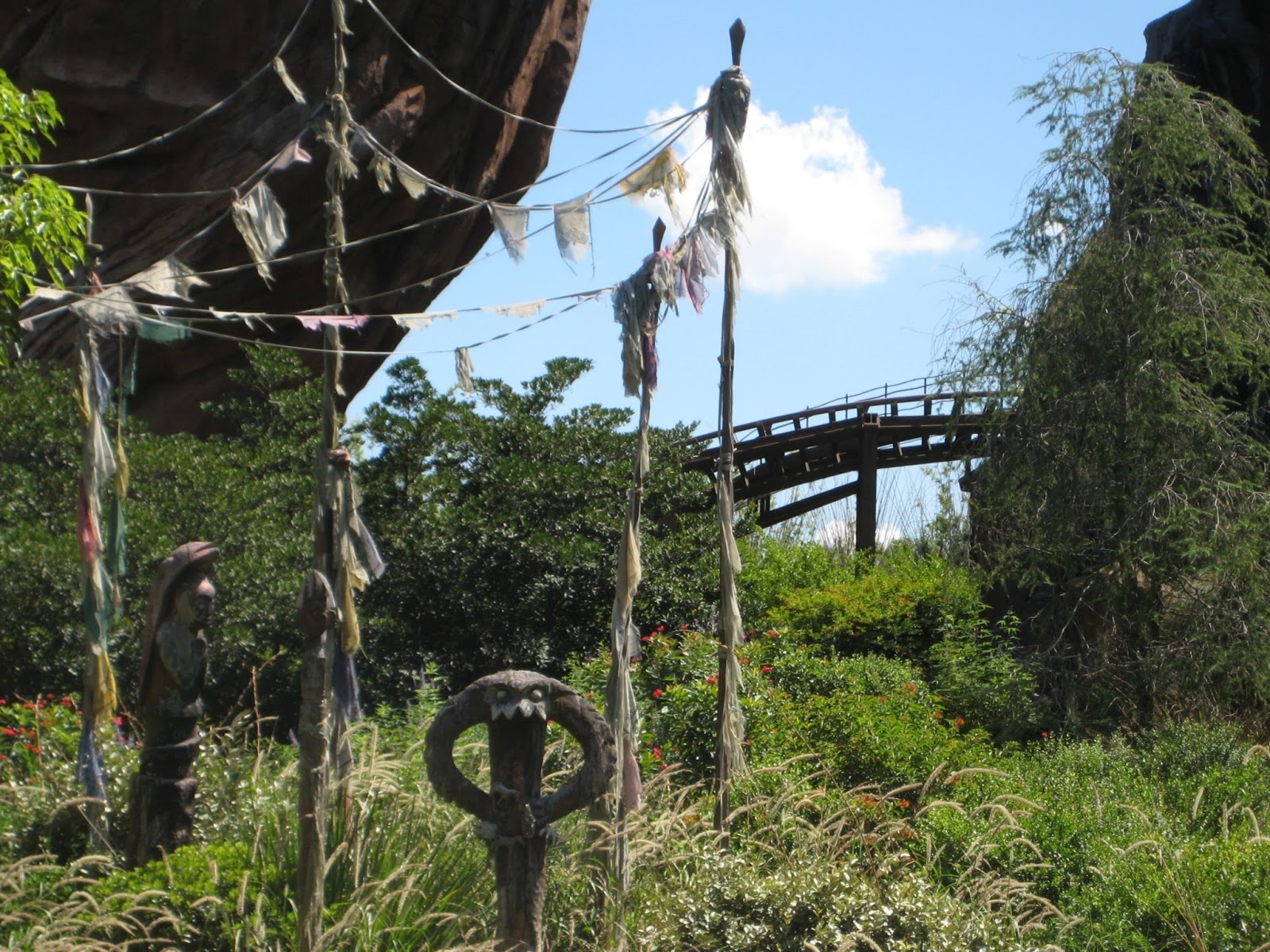 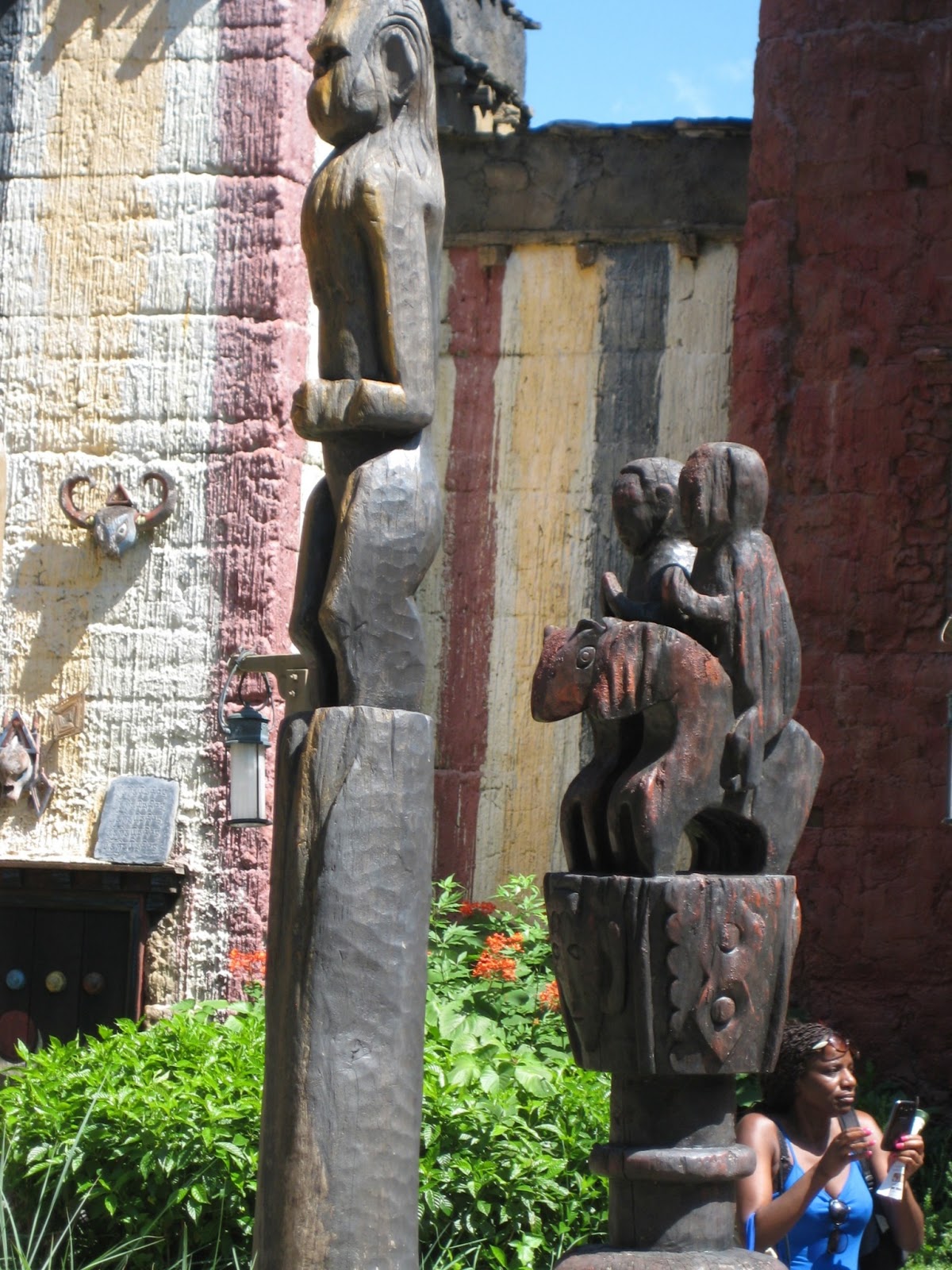 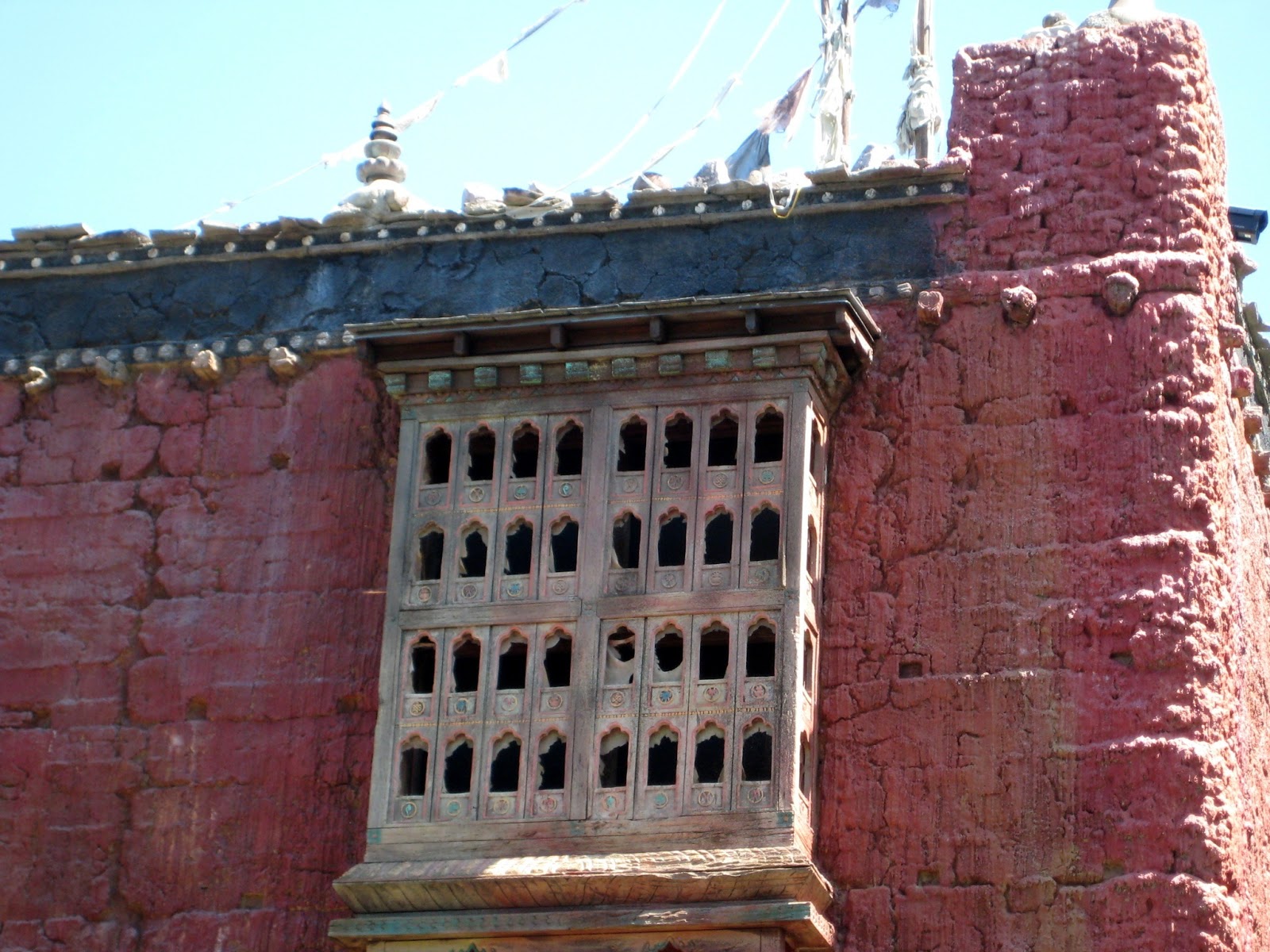 We then made our way round into Dinoland USA and rode a family favourite Primeval Whirl...the kids had a higher tolerance level for this ride than me and Simon so we grabbed a drink while they rode it time after time.
We also took a ride on Dinosaur, a ride that we hadn't done for a few years and one which Molly had never done.  In fact the last time we had ridden it Simon and Ethan had gone on it alone and whilst on the ride vehicle realised that one of Simon's work colleagues was sat behind them - now that really does make it a small world after all!

Anyway back to this year...we joined the queue which moved at a reasonable pace and it wasn't too long before we boarded our vehicle.  We had just moved out of the loading area and were about to venture off into the time of dinosaurs when our car came to an abrupt stop...nothing happened...then the lights came on and we sat there...and sat there. Then technicians came up to the vehicle, walked around it a few times, looked at it, messed about under a panel and then walked away.  Back they came again and still we sat there...I was waiting for the inevitable 'really sorry but there's a problem we're going to have to close the ride'...but no we were in luck.  All of a sudden all the lights went off and we were plunged into darkness and in a few seconds our vehicle was on its way with thankfully no further interruptions.  Was it our vehicle that was at fault?  I don't know, but what I do know is that all the cast members were brilliant; they kept calm and just got on with the job at hand of getting us moving again.

Before we left Dinoland USA we managed to get in a photo op! 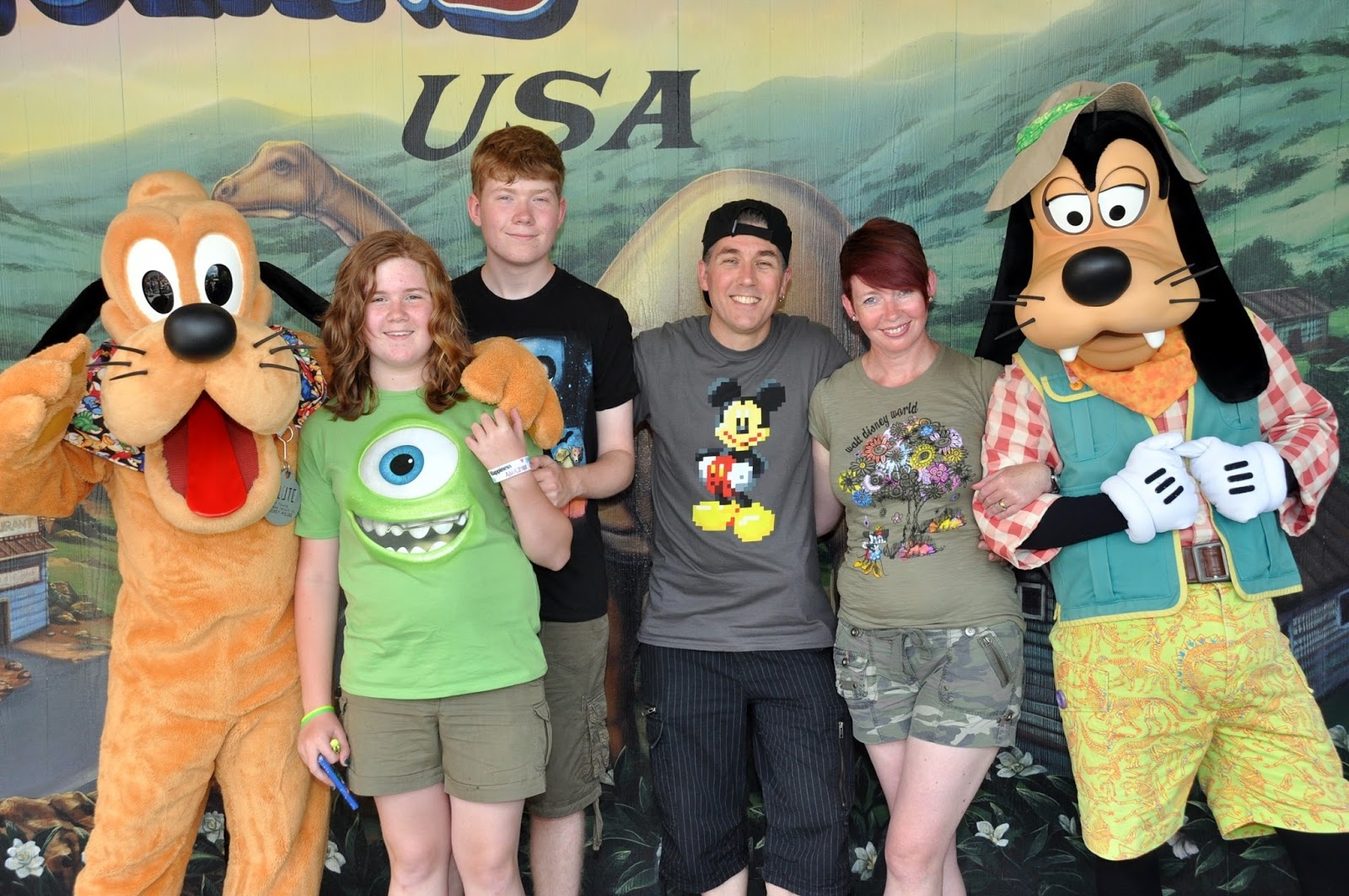 Then it was lunch at one of my favourites; Flame Tree BBQ, can't pass up the chance of a pulled pork sandwich! Followed by full on character meet and greets! 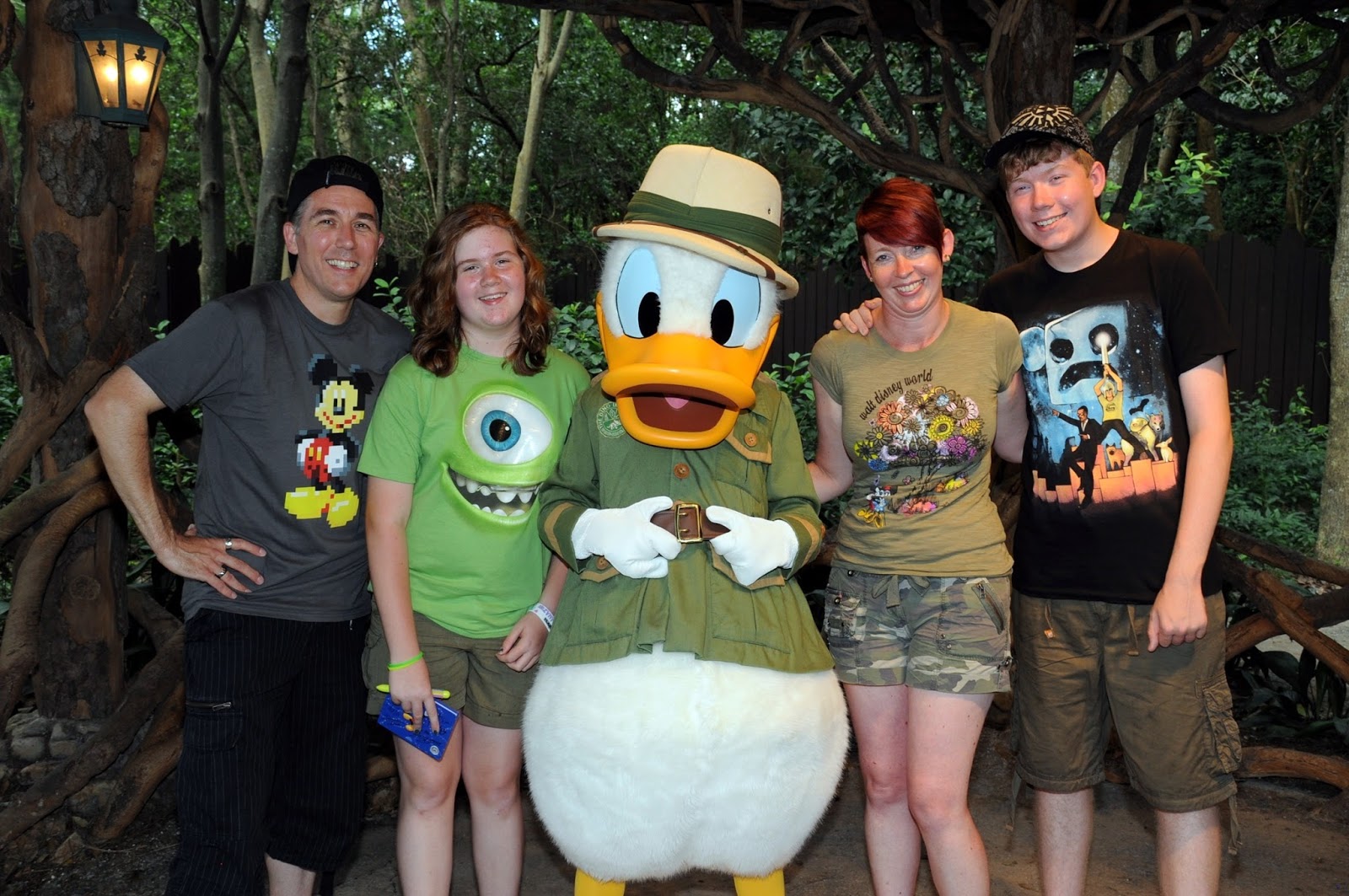 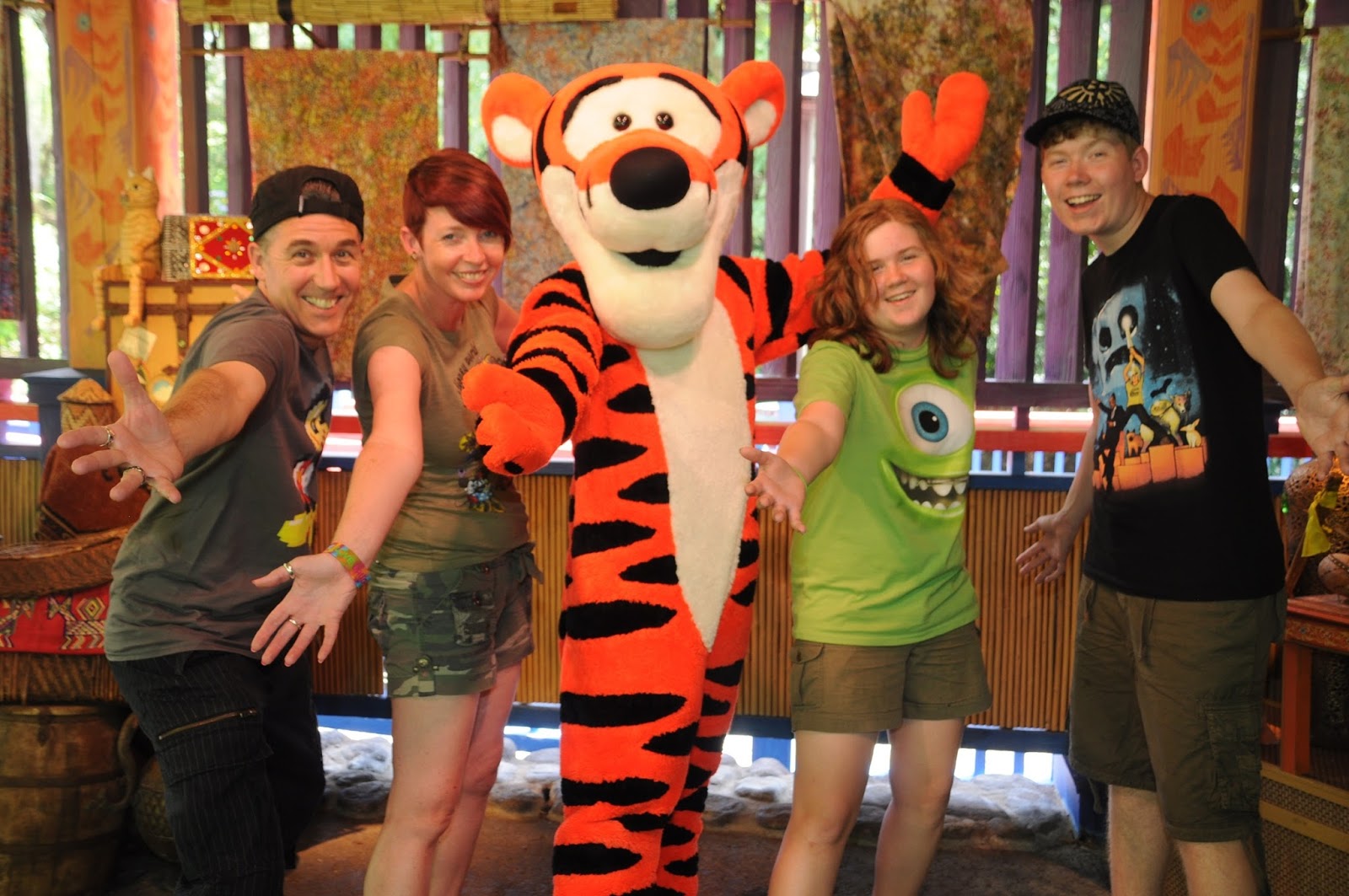 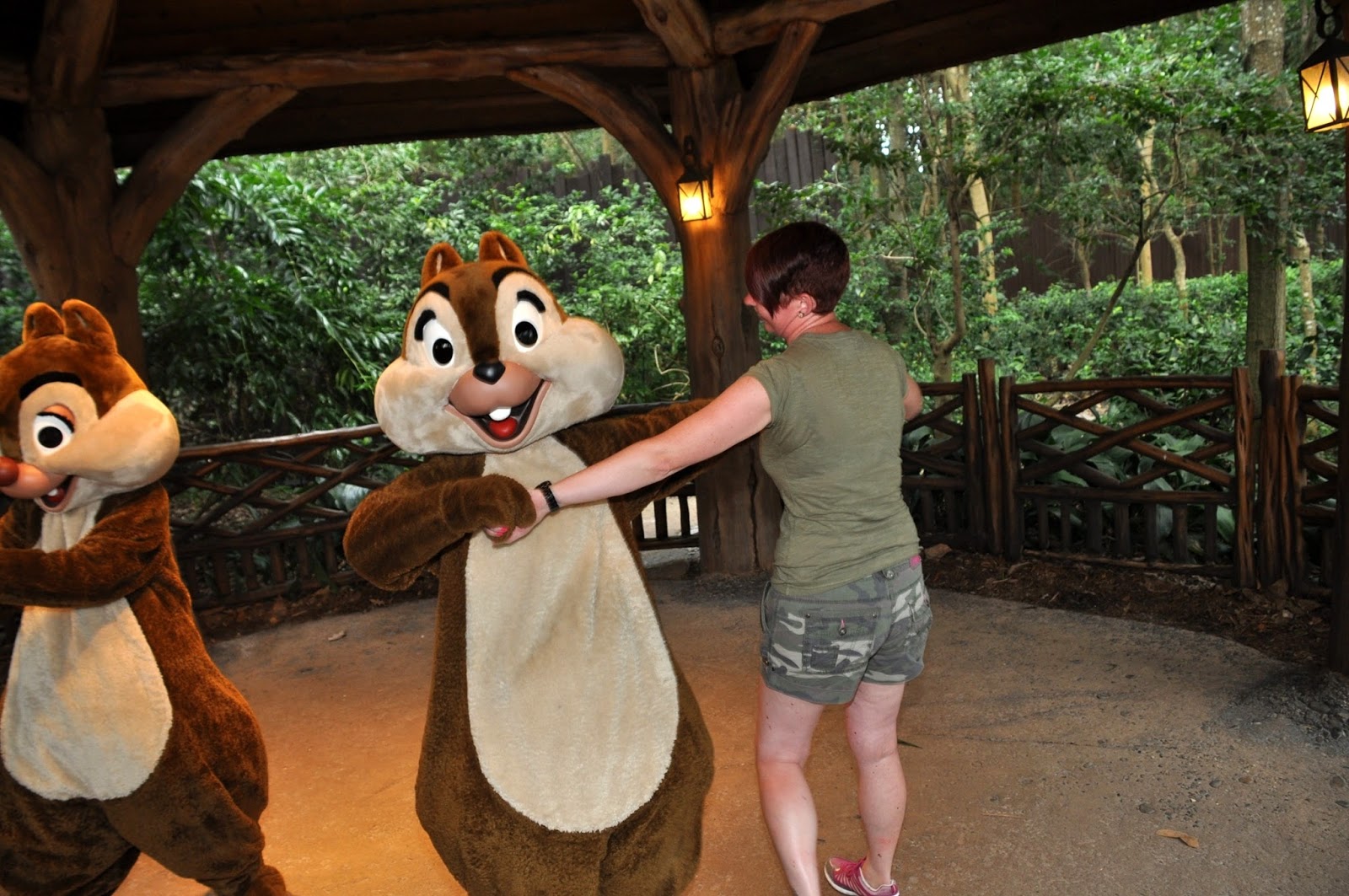 We ended our day at the Animal Kingdom with the kids taking full advantage of quiet lines for Expedition Everest riding it back to back at least four times...maybe more!
While Simon and I took the time to explore the Serka Zong Bazaar (the shop into which you exit the Expedition Everest ride)...
As it was coming to the end of the day for the Animal Kingdom we decided to head over to the Magic Kingdom for the evening.  So we took a bus over to the TTC (Transportation and Ticket Centre) before taking the ferry over to the Magic Kingdom.  We then decided that a third mode of transport was needed as we boarded the Walt Disney World Railroad for a trip around the park disembarking at New Fantasyland.  In need of a drink we decided that Gaston's Tavern was the ideal place and a chance to try LeFou's Brew...

Whilst enjoying the brew (apple flavour and sweet) we watched the Gaston 'Greet and Meet' going on just to the left of 'Bonjour Village Gifts'; it was so funny to watch.  Gaston was brilliant and such a poseur, I would love to see the results of the photos because the guests were totally unaware of the poses being pulled behind them.  It was a pure joy to watch and be entertained by.

After a quick ride on Under the Sea - Journey of the Little Mermaid - which I love - we headed over to Pinocchio's Village Haus for a spot of food followed by a ride on the Haunted Mansion.  By then it was time to make our way over to Main Street USA to watch the Main Street Electrical Parade. But on the way over there we just had to pick up a dole whip, well it would have been rude not to ;)
It was then a case of find a spot and wait for the parade to begin... 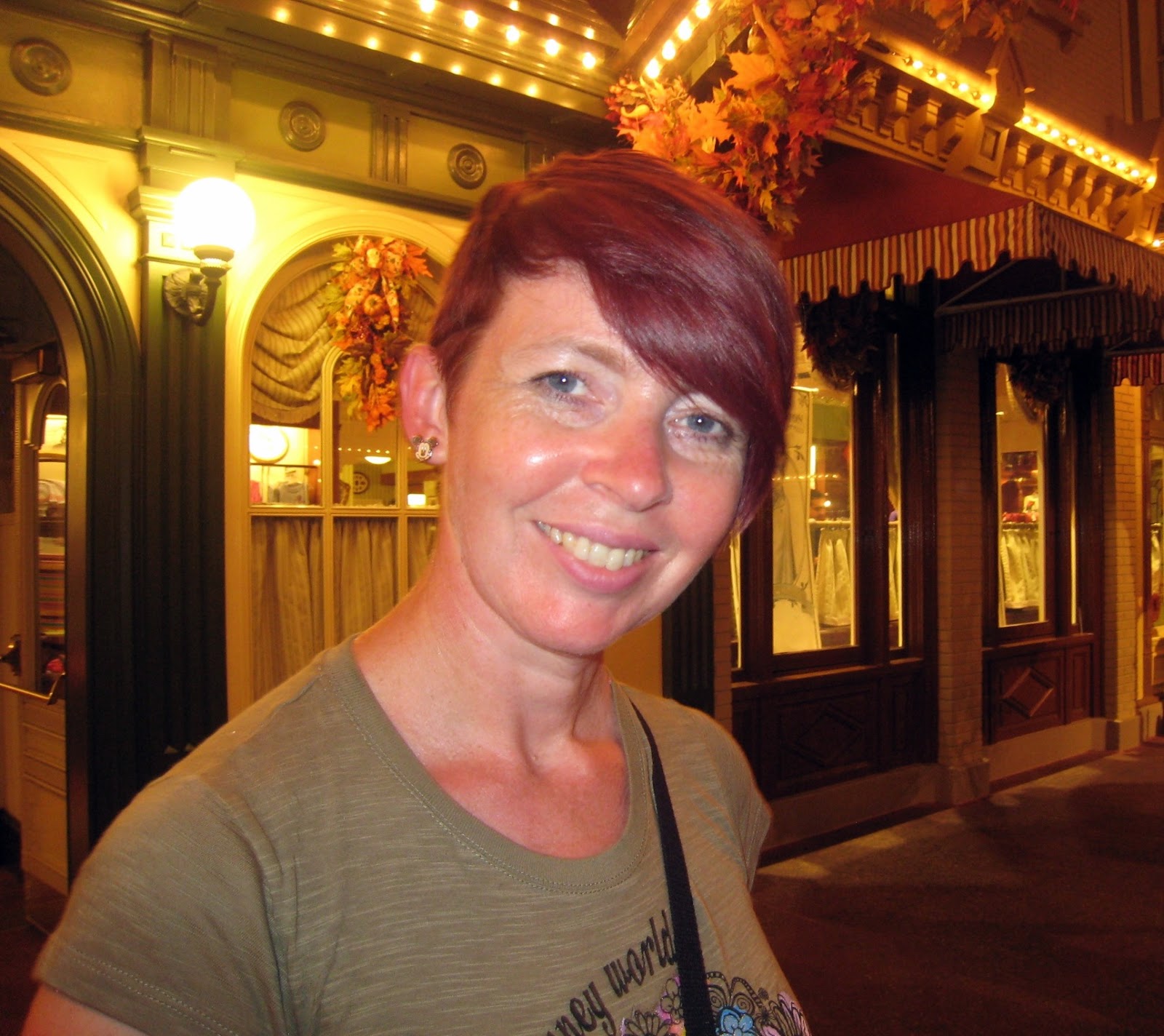 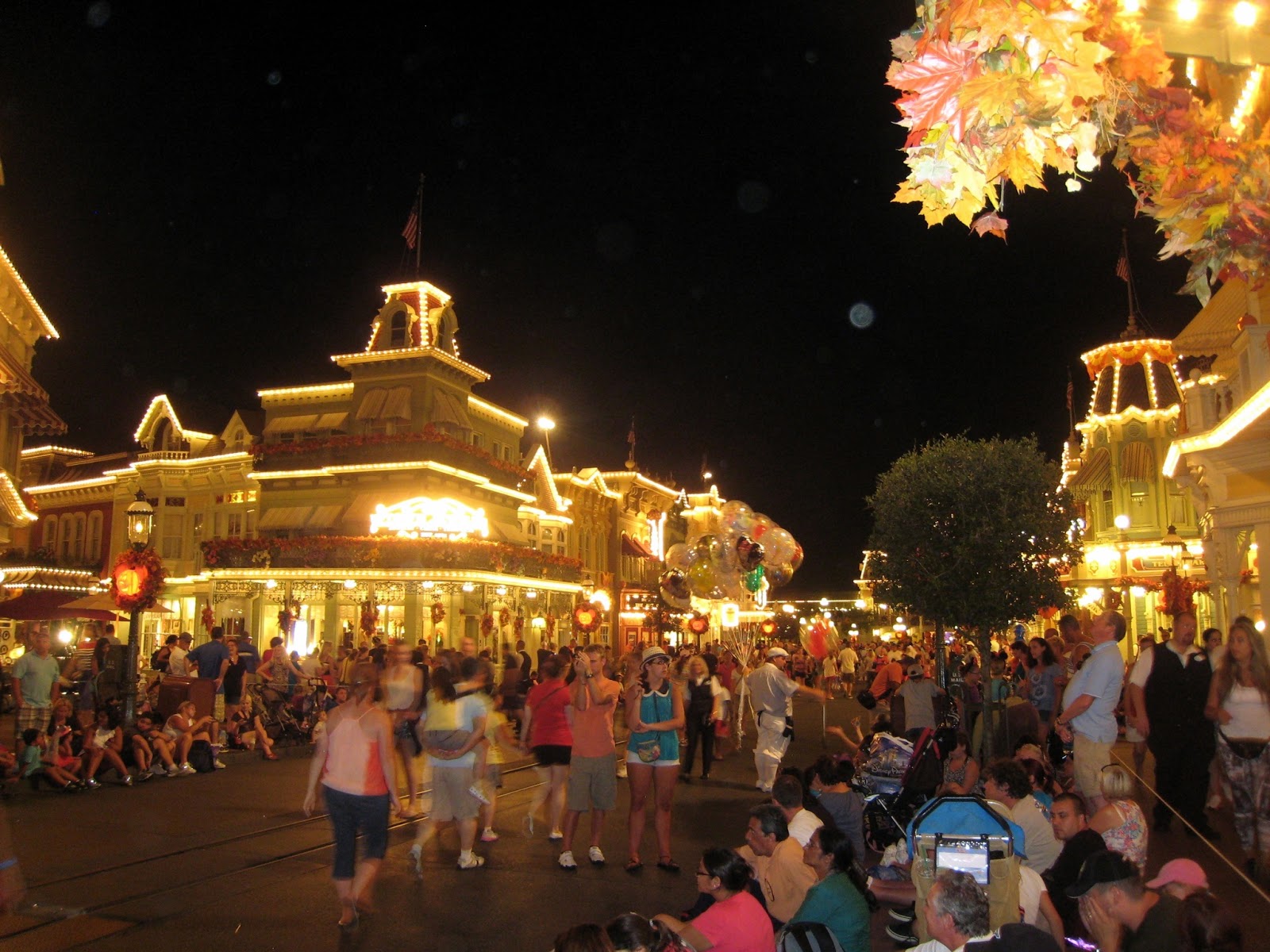 And of course after the parade we watched Celebrate the Magic before one of my all time favourites and must-do's - Wishes Nightime Spectacular...at which I always shed a tear or three, I'm such a softie!
We rounded the night off with a visit to Starbucks for a chocolate cookie crumble frappuccino...
And that was the end of another full day at Walt Disney World...who said vacations were a chance to stop and chill...not us!!