10 Days to go until my next Disney trip!

So for the first time since February 2015 we, as a family, will be heading over to Disneyland Paris for a well deserved 5 day visit.

This trip will mark 20 years since our first visit to Disneyland Paris way back in August 1999. Back when we had just one child who was only 18 months old and whose favourite ride was It's A Small World; which he would point out to us by shouting 'windmill' because that was the nearest landmark to the ride! Don't think this will be his favourite this time around!

So here we are 20 years later heading back with two young adults and find ourselves staying in the same hotel...Hotel Cheyenne! Oh how times have changed; in fact that seems to sum up these last few months as we get used to our children leaving education and making their own way in the world.

Although we have visited numerous times since that first visit in 1999 it will be the first time staying at the Cheyenne for quite awhile as our most recent trips have seen us staying in the Sequoia Lodge. But it is merely a coincidence that our trip this time is back to the Cheyenne as it simply came down to a choice of availability and cost. Although the fact that the hotel has recently been refurbished and now has a Starbucks on site were both big pluses when making the decision. But I think it will be interesting to see just how much, or little perhaps, has changed from our first visit compared to now.

So I thought I'd have a look at the photos from our 1999 visit; this meant getting out the physical photo albums because this was pre-digital! Also these photos are so stuck, literally stuck, into the albums there was no way I could prise them out to scan them so had to take photos of the photos!

So here we go, and interestingly the dates of our visit back in 1999 and now are very similar which was a little spooky to realise!
I then remembered that while we were there back in 1999 there was an eclipse happening, which we experienced inside Disneyland Park and I kept the small information leaflet that Disney handed out along with some special 'glasses' to view the eclipse!
Here are a couple of photos of Discoveryland; 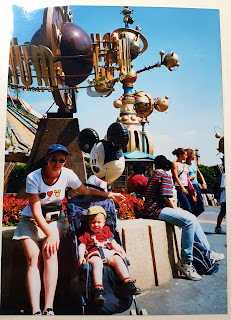 And of course there had to be photos of the parade...love the music to this parade...Dancin' a Catchy Rhythm was just the best parade music!
And then this was the time when the Main Street Electrical Parade had made its way over from the US which was a great surprise to us back then as this was the first night time parade we had ever seen when we'd visited Walt Disney World back in 1991. Unfortunately the photos were just too dark to include...lots of black with a few dots of light!!

I love looking back on old photos and all the memories it brings back but now I'm looking forward to creating some new memories.