Well here we are again to chat about my Disney ink!

It really is true what they say about having tattoos; you can never stop at just the one! I had never thought I would be the one to be adorned in ink, in fact growing up tattoos were one of those taboo subjects and always associated with 'certain types of people'!

Well here we are and I have fell in love with having tattoos! I remember watching 'Miami Ink' on TV a fair number of years ago now and gathering a whole new perspective on tattoos; it was hearing the stories behind the tattoos, watching the artists at work and realising that people of all types and backgrounds could celebrate the art-form together that got me intrigued.

Once I'd made my mind up to have a tattoo I had two conditions; first it had to be something designed by my husband, Simon, so I could have a piece of his artwork on my body and second it had to have a Disney element to it. I'd also decided that my first tattoo would be somewhere 'hidden'...I don't think at that point in time I was overly comfortable with the idea of showing off the fact that I had a tattoo...Oh how times have changed!

So my first tattoo was on my lower back; designed by Simon and tattooed by Gray Silva at Rampant Ink, Nottingham. It comprised of a Mickey head silhouette at it's centre before spreading out in a graffiti style. Simon even managed to incorporate his and the children's initials into the design. 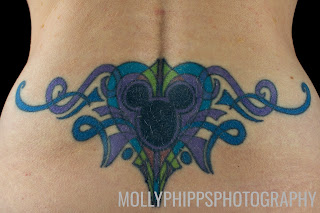 Next I decided that my foot and ankle would make an ideal spot for a bit more ink...not one to shy away from choosing areas of the body that can be challenging to get inked. Rachael Huntington was my tattooist of choice and was very patient with me as every now and then I would twitch involuntary as the needle moved around my ankle bone area! 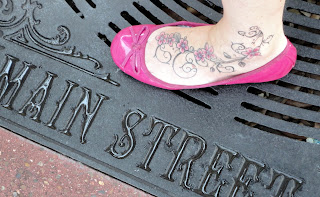 I thought I'd choose somewhere a little less challenging for my next tattoo and went for this Mickey design across the back of my neck. This was taken from an initial design by Simon that Rachael then embellished. 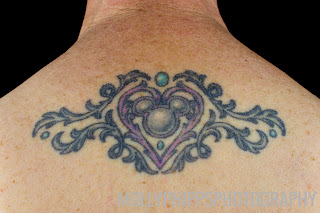 The next one I had was also taken from some of Simon's artwork. Simon had undertaken a project called '365 Mickey's' where he drew a Mickey a day for a year. One of these drawings was a take on my ankle tattoo, so Rachael took the design from his artwork and came up with this tattoo for my inner wrist. Four tattoos in and I had the idea of a complete Disney inspired sleeve! This was started by Rachael, but with the majority of the ink completed by the ever lovely and talented Saint Heywood (now running his own studio - Acadia Tattoo)

These photos taken by my talented daughter (Molly Phipps Photography) show my fully completed arm, this was completed over a number of months and mainly 6 hour sittings with an odd 3 hour thrown in! 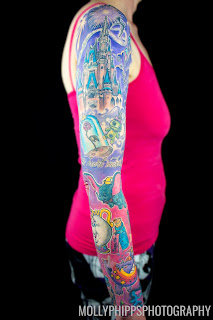 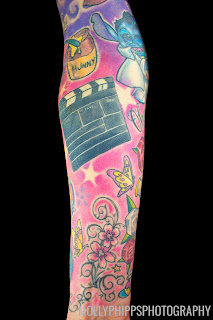 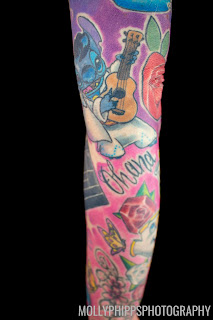 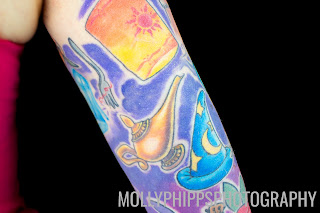 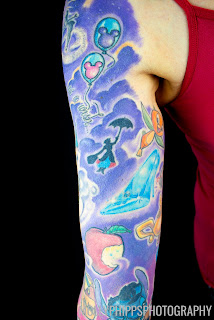 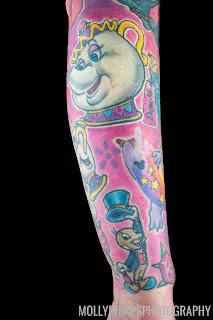 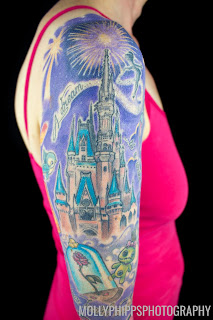 Then we decided to move over onto the other arm, for a Star Wars inspired tattoo - see my previous Disney Sleeve blog post which details the reasons behind this one! 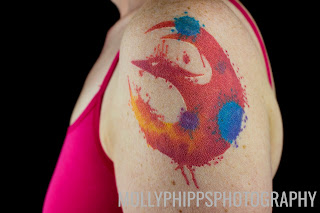 And that brings us up to now...and my latest tattoo. Now this has been a work in progress that lasted about 4 months and was completed back in October of last year.

The inspiration this time came about while watching a burlesque show. One of the performers, the amazing Chi Chi Revolver, had a tattoo of a carousel around her thigh and I fell in love with it. As everyone who loves Disney knows it was watching the merry-go-round at Griffith Park in Los Angeles that is credited with inspiring Walt Disney to develop Disneyland. This gave me that connection to Disney that all my tattoos have. A carousel, around my thigh, inspired by the carousel at the Magic Kingdom at Walt Disney World, with horses like those seen in Mary Poppins! An idea was born!

The carousel at the Magic Kingdom, once known as Cinderellas Golden Carrousel but now named Prince Charming Regal Carrousel, was themed...obviously...after the film Cinderella. So with that in mind, plus Mary Poppins horses, plus Disney and plus a garter style tattoo I once again paid Saint Heywood a visit and after about 20 hours or more of tattooing my newest tattoo was complete. The whole tattoo was completed over a number of sittings most of which were 6 hours with a couple of 3 hours thrown in for good measure and I absolutely love it! 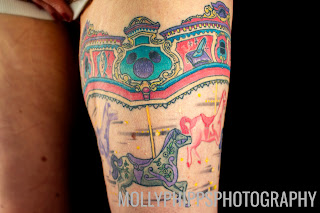 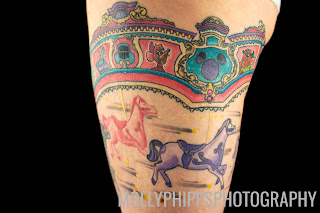 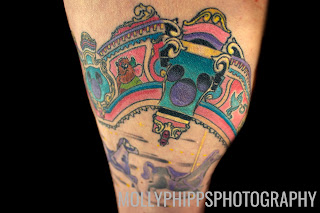 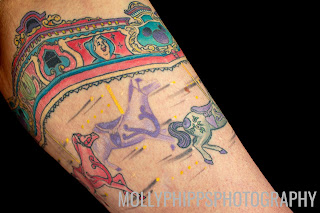 A big thank you to Molly once again as it proved a little tricky to get photos of this one!!

So what next? Well...I have just booked in to see Saint once again and this time it's going to be a mother and daughter affair! Molly has her heart set on her first tattoo being a Disney one while I actually have a couple of small pieces in mind...

If you'd like to know more about my tattoos and how they came about please have a look at my previous posts;
Disney Inked
Disney Ink Update
A Bit More Ink
My Disney Sleeve
Posted by DisneyJayne at 16:25