WOW! What a Weekend - Final Day! 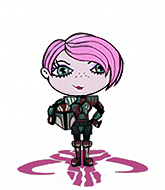 Well after an amazing couple of days we made it to day number three and the last day of Star Wars Celebration 2016.

The day started with a hearty breakfast which kept us fuelled for the day ahead. 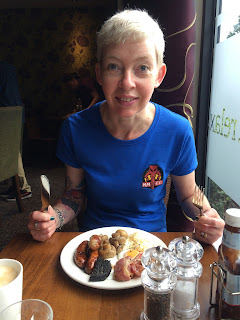 It was then time to get dressed Mando style! Here's just some of our kit laid out prior to getting 'kitted up'! 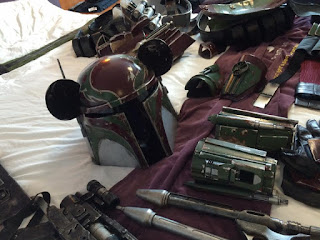 And today was chance to get out those Mickey ears. These were detachable as they are not strictly 'official' Mandalorian armour; Simon had craftily fitted extra strong magnets to the helmet and ears so they could be secure yet easily removed and attached. Pouches that are attached to my belt became handy 'ear holders'.

Once ready we headed out to the Excel Centre but we had not even made it out of the hotel car park before we were stopped for our first photos of the day. But by now we had a plan...each time someone wanted to take our photo we asked if in return they would take a photo of us with our camera! 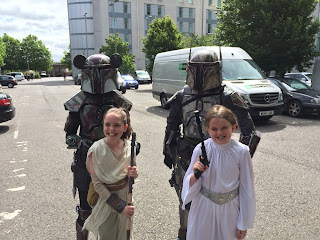 And then we managed to get one of just us (this photo would come in rather handy later on....) 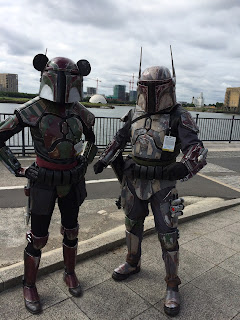 And here's just one of many taken at the entrance to the Excel this time with a young Star Wars fan.. 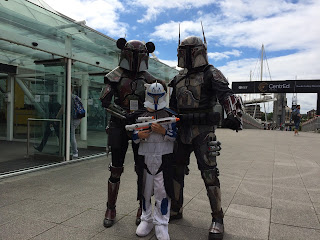 And once again the walk into the centre and through weapons check before entering the main exhibition halls was staggered with photo opportunities.

But this morning we had a job to do as we had offered our services to help out in the Star Wars Celebration Family Area. This was an area set aside with space for families to sit down and take five minutes as well as some fun activities for the younglings. Within this area various groups had agreed to help out and provide activities over the weekend. The Mandalorian Mercs had agreed to be part of this and as such had a number of slots over the three days and the Sunday lunch time was our slot!
Our job was to help the children make their own set of Mandalorian armour by way of some colouring sheets! 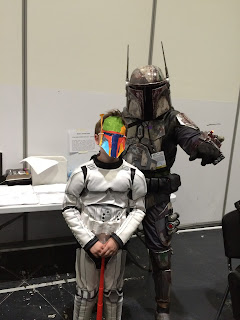 Although I think in some cases the dad's were more interested than the children!
After an hour it was time to pack away our crayons and head over to the Mandaorian Mercs booth to take part in a group event. The idea was to have a group photo with as many of us as possible, so once we had all congregated at the booth we made our way out of the building to the front steps. It was such fun all of us walking out 'on mass' as the reactions from the public were great; lots of photos, smiles, waves and high fives. Once out of the building we all gathered on the entrance way steps which served perfectly to enable some great photos to be taken.

And another shot...we reckon there must have been over 50 of us! Quite an impressive sight I think you'll agree! 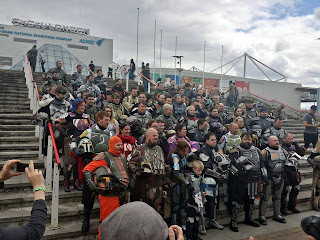 Now once the photos had been taken we had a little surprise as we had a proposal between two of our members!! Thankfully she said yes!

As a memorial to a couple of official members who are no longer with us we then took part in an 'honour march'; this meant us all marching back into the arena in single file, with no interactions just straight forward heads up and march. 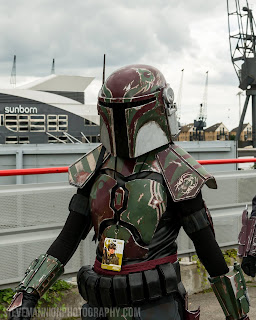 Thank you to Steve Mannion Photography and J Goldsmith Photograhpy for some of the above images.

The march wound it's way around the two main exhibition halls before returning to the Mandalorian Mercs booth where we hung out for a short while...here's a few photos of Simon on booth 'duty'! 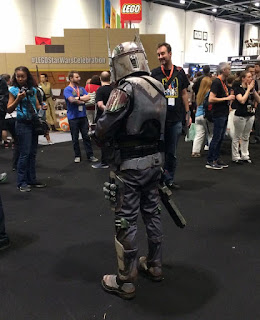 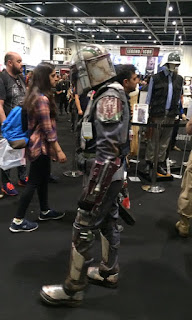 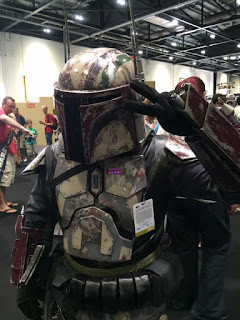 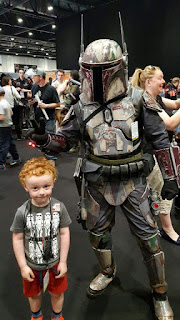 We then decided to head back to the hotel, grab a shower and change before heading back to Celebration for the last hour. This gave us chance to have a last look around and we even had chance to look inside the official Celebration Store as there were no longer any excessive queues! Although once inside there was not an awful lot to look at as stock was predictably low. I have to admit I was rather disappointed by the lack of unique clothing options specifically for us ladies! There were lots of unique t-shirts but I had hoped to see lots of 'Her Universe' products and although there were some pieces the choice was pretty dismal - about 3 or 4 different items.

Now I love the clothing produced by 'Her Universe' which is ordinarily only available online from the US, so I had hoped this was going to be an ideal opportunity to make some purchases without incurring overseas postal fees and potentially customs charges too. But alas it was not to be :( It was such a shame especially as the lady behind it all, Ashley Eckstein, was actually at Celebration talking about her role as Ahsoka Tano in Star Wars;The Clone Wars and Star Wars Rebels. 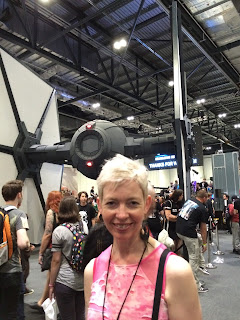 As we wandered around we happened to stumble upon a talk that was talking place in one of the areas set aside for specific media outlets in the main halls...and we were very happy to eavesdrop in on Dave Filoni chatting all about Star Wars Rebels... 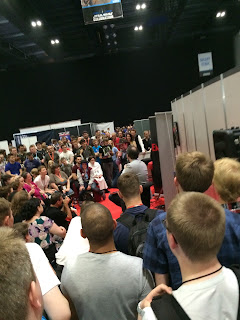 Now for those of you not familiar with the Star Wars extended universe let me give you a brief explanation! So we all know about the 3 original films and then we had the 3 prequels and then last December we had the first in the next trilogy - ok? Well besides all these movies there is even more Star Wars stuff - comics, books, toys and even animated series. And Dave Filoni is the creative force behind these animated series; Star Wars; The Clone Wars and Star Wars Rebels both of which are fantastic. Having watched both of these series relatively recently I have been really impressed by the story telling and the attention to detail that Dave Filoni and his team have produced. Watching all the behind the scenes featurettes has been fascinating and given a real insight into the amount of work, dedication and love that goes into producing anything that has the Star Wars name attached to it.

But anyway, Star Wars Celebration was now drawing to a close and at 5pm on Sunday 17th July 2016 it came to an end. But we had yet more fun planned as the Mandalorian Mercs were getting together that evening in a local pub to have a meal and round out what had been a fantastic weekend.

And then something happened that for the fan-girl in me made my weekend!

So there we were at a fairly standard, innocuous pub on the outskirts of London about to enjoy a meal with our new and very lovely Mandalorian family when we caught sight of someone entering the room; Simon and I both did a double take and looked at each other with that 'are you seeing what I'm seeing' look on each of our faces. Simon then said 'Dave Filoni's just walked in the room' and I think I said something along the lines of 'I know but why? What's he doing here? What? I don't understand...eek!'

Now at this point Simon and I are beginning to geek out big time and looking around the room everyone else seems to either not have noticed who's just walked in or not aware of who he is...it later became apparent that we all did know who he was but we had all adopted the traditional British 'we're not going to get over excited' approach! Well, we had our meal and Dave spent a good couple of hours with us all. He got up and spoke about the respect and love he has for all Star Wars fans. He spoke about how he respects what the Mandalorian Mercs are all about and how he always wants to ensure that he 'does right by us' when introducing Mandalorians into his work. His passion, love and care for this franchise was very evident in how he spoke and made me geek out even more!

I was determined to see if I could speak to him and at least get a photo with him but my English reserve was in danger of getting in the way...after all how does one ask a celebrity for a selfie? On our way back from the bar we found ourselves in an ideal position; the meal was over and everyone was just chatting and mingling and we noticed one of our fellow Mandalorians approach Dave for a photo. As we were stood very close by I decided this was our moment. Simon said to me in a half joking manner 'you ought to ask him if Mickey ears could be brought into the series' so I quickly got out my phone and found the photo of Simon and I from earlier in the day with me wearing my Mickey ears. I then approached Dave with phone in hand and showing him the photo began a conversation about Mickey ears in the Mandalorian universe...I kid you not! Dave took hold of my phone and zoomed in on the photo. We spoke about Mickey being his 'boss' now and whether the ears could be some sort of radar dish/communication device. He also gave us some lovely compliments about how good our armour looked and how he loved the paintwork...as you can probably guess by this point I was one happy and very geeked out fan-girl.
But the icing on the cake to all of this was later on as Dave was leaving and he came to say goodbye to some of our clans council leaders who we happened to be sitting next to. He turned and spoke to Simon and I, making reference to the Mickey ears and promised to 'have a look into it' and he put his hand on my shoulder as he wished us well and said goodbye. Que one very excited me, who quite frankly then acted like a teenager meeting the latest boy band...I hadn't really realised how big a Star Wars fan I had become until this point. In fact I am now even talking about a possible new tattoo that will be Star Wars themed!!

Someone else we got to chat to in more detail that evening was Tom Hutchens who is the founder of the Mandalorian Mercs or to give him his proper title 'Mandalor the Uniter'. Such an honour to meet him and find out a bit more about the Mercs, their origins and their ethos; a very cool guy.
So that was our Star Wars Celebration weekend, a fantastic fun filled three days where we got to experience the joy of cosplaying as well as meeting a whole new family of friends as well as hanging out with a celebrity!
Posted by DisneyJayne at 21:20