The first part of my review talked about the general theming of the hotel as well as the room we stayed in; what shall we look at next?

So what facilities does the hotel have to offer? Well there are two restaurants, one bar, one shop, a swimming pool and a gym.

On this trip we didn't have chance to use the swimming pool or the gym; we had a quick look in and both looked nice enough. The pool and gym are located within another lodge type building away from the main hotel and although predominately an indoor pool there is a small section of the pool that ventures outside. Suffice to say as this was the middle of February and rather chilly the outside pool area was not open. Whether you make use of these type of facilities or not is purely a personal one but I think it's one worth thinking about when considering which hotel to book. As most stays to Disneyland Paris are likely to be only a few days will you have the time, or the inclination, to use these type of facilities or would you rather be spending your time in the parks? I know for us time in the parks was much higher up on our list of things to do than spending a few hours in the pool. And whilst having a pool and gym at the hotel was an added benefit of choosing the Sequoia Lodge it wasn't a deciding factor for us; we were more interested in it's location, size of rooms and restaurant facilities.

Talking of restaurants the hotel has two; Hunters Grill and Beaver Creek Tavern. Well I say two restaurants, and once upon a time these did operate as two restaurants; one a buffet and the other your more traditional table service. However, from my research prior to travelling, and since, it would appear that both locations kind of operate as one. I shall try and explain...both restaurants are located in the same area of the hotel opposite each other across a small foyer area and appear to operate more as one restaurant that has two separate dining rooms. Although we never used them for dinner we did use them for breakfast most mornings of our stay.

So let's explain how breakfast works. Breakfast is included as part of your stay so when you check in you are asked what time you would like breakfast for each day of your stay. Each time slot has a limited number of places and so the time you want may not always be available. For each day of your stay you are given a different coloured card with a time slot on. On the designated day at the specified time you present your card at the podium located between the two restaurants. A cast member then directs you to one of the two restaurants where you then join the queue for that restaurant and wait for a cast member to seat you. This was a relatively short process and sounds more time consuming than it actually was.
You are then shown to a table and the cast member writes on the paper tablecloth to indicate that the table has been allocated; they usually draw a tri-circle 'Mickey' and the number of people dining. We ate in both restaurants during our stay and both operated in exactly the same way, buffet style, and offered the same food options for breakfast. 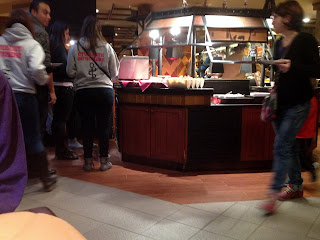 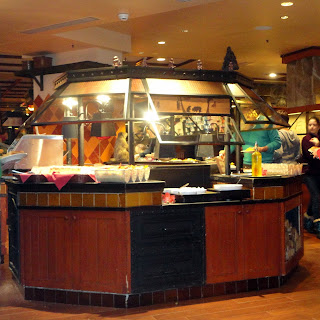 Breakfast options included; hot drinks (coffee, tea, hot chocolate, hot milk), fruit juices, cereals, toast with various spreads (jams, marmalade, butter, chocolate spread), croissants, pain au chocolate, fruit salad, deli meats, olives, cheeses and bread. There were signs for hot breakfast options that were an additional cost but we were unable to fathom out how to get this should we have wanted it as there were no cast members operating a hot food station, nor were we offered it by any of the cast members we had contact with - very strange! We did take breakfast in Disneyland Park one morning at Plaza Gardens and the food options were basically the same; perhaps a few different deli meats and a couple of variations on the bread choices but otherwise the same.

We found the breakfast to be of a decent quality and well stocked. The cast members worked very hard to keep everything flowing as the restaurants were continually busy; after all everyone staying at the hotel would be taking advantage of the included breakfast. On previous trips (quite a few years ago admittedly so things may have changed) we had stayed at the Hotel Cheyenne and here it was more of a cafeteria style serving; having to queue to fill your tray with your choice of breakfast and then finding a table in a very busy dining hall. For us personally this was very chaotic and not a pleasant way to start the day and was one of the reasons for choosing the Sequoia Lodge over the cheaper hotels.

Because the breakfast was self-serve buffet style a lot of guests took advantage of this by stocking up on bread rolls, meats and cheeses and making sandwiches to take with them for later in the day!

As far as I could make out the restaurants then open again for dinner as an all-you-can-eat-buffet style offering. The hotel also has one bar; the Redwood Bar and Lounge. This is quite expansive and beautifully decorated and with an open fire, making it a very cosy environment. We took advantage of it one evening and whilst we enjoyed sitting and relaxing with a drink it was extremely busy (we had to wait for a table to come free) and also relatively expensive.

One thing to note when comparing to Disney resort hotels at Walt Disney World is the lack of a 'food court' type offering. Walt Disney World hotels will have a food court in the moderate and budget hotels and a cafe type offering in the delux resorts where food of varying descriptions can be bought at any time during the day. Whereas in Paris hotel food options are restricted to specific meal times or the bar areas.

Located just across from the bar area and is the hotel shop; Northwest Passage. The shop is not overly big, stocks the usual array of merchandise and has enough to keep you meandering around for five or ten minutes. The merchandise wasn't anything special with very little that appeared unique to the hotel. We also found that the type of items stocked was not as expansive as what we were used to seeing in Disney resort hotels in the states. There were a few essentials (e.g. toothpaste etc) but these were all located behind the cashiers desk and were very limited. Food items were limited to 'Disney' themed cookies and candies, with a small selection of branded candies/chocolates and potato chips. There was a fridge with mainly soft drinks and a couple of choices of lagers/beers. Wine was only available by request from the cashier and was very expensive. We had expected/hoped to be able to visit the shop and come away with some nibbles and treats to take back to the room (as we would have done in the US) but we really struggled to find anything worth bothering with.

One of the best things about this hotel is it's location; located on the shore of Lake Disney it looks out towards the Disney Village and is only a few minutes walk from the Village itself. It then takes about a 10 minute walk through the Village to get to the parks; the hotel does lay on a free shuttle service but for us the walk was so short it really didn't seem worth while taking the shuttle, in fact we never even thought about using it! The walk is really rather pleasant and quite scenic, even when it's freezing cold! 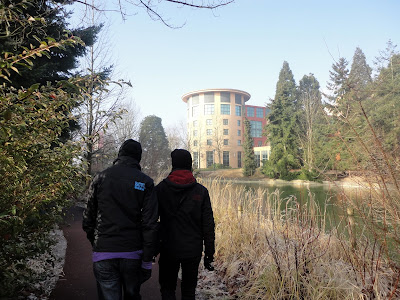 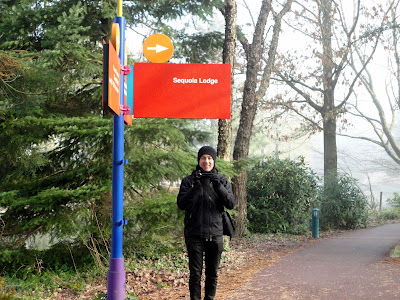 Walking through the hotel grounds. 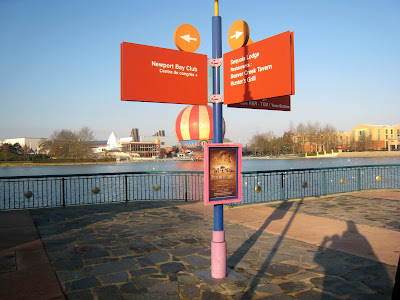 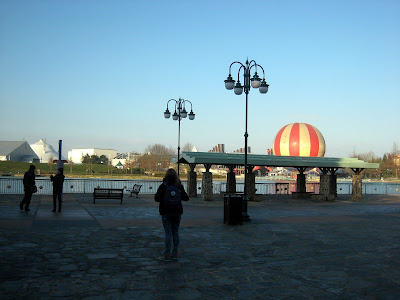 On the promenade, outside the rear entrance to the hotel.

Various shots walking around in front of Hotel New York, looking out over Lake Disney towards PanoraMagique (tethered hot air balloon ride like Characters in Flight at Downtown Disney at Walt Disney World) and the Disney Village. 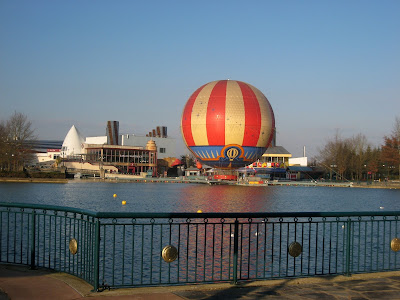 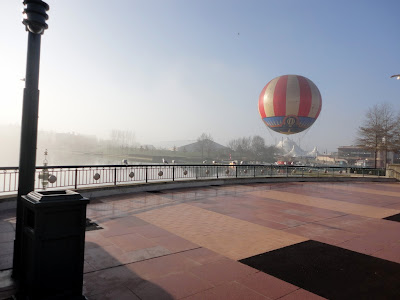 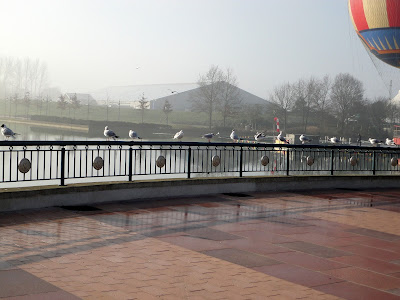 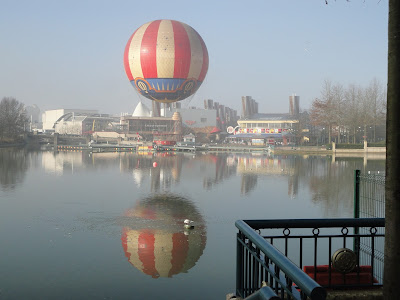 The Sequoia Lodge is a beautifully themed hotel, set in some great landscaping all adding to the vibe of an American National Park. Personally I would have liked to have seen a few more 'Disney' references within the theming as in some areas whilst it embodied the National Park feel it was hard to see the connection to Disney.

But I suppose the question to end with is would we stay at Sequoia Lodge again? Well, yes I think we would; this was our second time staying here and we really liked the resort. It was within our budget range, it was a good distance to the parks and Disney Village, the inclusion of a well organised breakfast was great and there were enough amenities at the resort for our length of stay.

Well that about concludes my thoughts on Disney's Sequoia Lodge, next time I shall be looking back once again to more details about my visit to Disneyland Paris. Thanks for reading :)