Well here we are, the last day of our short trip to Disneyland Paris.

It was yet another early start for us, breakfast was booked for 7.00am and we made it for 7.30am...we had the usual breakfast selections which I have to say we were all a little bored with by now. Not quite the same as staying at a Disney hotel in the US where the breakfast choices are wide and varied.

We then had to finish off our packing...I did feel a little mean squashing Sulley into the bags though...
Because we had booked our trip direct with Disneyland Paris we automatically qualified for the Disney Express service. We took our cases down to the Left Luggage Office in the hotel and were then free to enjoy the parks on our last day knowing that the cases would be waiting for us at the train station later on.

We all decided that we'd really like to ride Ratatouille once more so off to Walt Disney Studios we went. Both Simon and I went through the turnstiles without a problem but neither of the kids tickets would work...so we were left with us one side of the gate and the kids on the other and a cast member who didn't speak enough English to be able to tell us what the problem was. The next thing we know is the cast member saying something to us in mainly French and then walking away...luckily they returned with two new tickets for the kids which got them through the turnstiles. Now the new tickets the kids got were basically one day park tickets which was fine for what we needed, but I was a little disappointed that they didn't give us back the original tickets that had stopped working. You see I'm a bit sentimental and like to keep things like tickets as mementos of trips but on this occasion I couldn't :(

Now we were inside the Studios we headed to the right to ride Ratatouille. As we approached the Toon Studio area of the park it became very busy; on passing Crush's Coaster the queue was out into the pavement area, and in fact the Stand-By line hadn't even opened.

Then as we rounded the corner we were met with a sea of people and what looked like a very long queue. So we jumped on the end of the queue suspecting it was for Ratatouille and Simon went off to investigate. 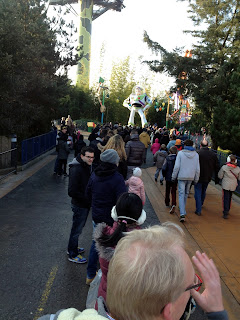 Sure enough Ratatouille was not yet open, even the Stand-By line was not yet open and this large queue had formed. But there was also a lot of people simply congregating in the 'Place de Remy' the town square like area in front of the ride - there seemed to be no organisation as to what was happening. There were no cast members about, no-one giving out information, no-one organising the waiting guests...it just seemed terribly disorganised.


There was also an equally large queue for the Fastpass booths, which were already issuing tickets for midday and beyond. But as the ride was not yet operational, and showed no signs of being operational any time soon getting a Fastpass seemed a little pointless!

So we left the area and walked back round past Crush's Coaster which now displayed a 60 minute wait. Both the Stand-By line and the Single Rider line were taking up a lot of space in the thoroughfare and were making navigating this area rather tiresome.

We took this time to get a photo with the Partners statue, which is just beyond Disney Studio 1. 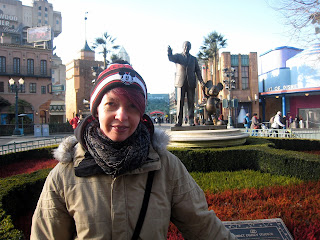 So what to do now?

We decided to look at the 'wait times board' as that might gives us an idea. Well the board confirmed that both Ratatouille and Crush's Coaster were closed. The shortest wait times were for the Tower of Terror and Rock 'n' Roller Coaster, neither of which we were interested in riding. So we looked at some of the shows; Animagique and CineMagique both of which were scheduled to start at either 11.00am or 11.30am and most of the showings were in French...the first English presentations weren't until the early afternoon! So after a 20 minute visit to Walt Disney Studios we found ourselves leaving the park and heading to Disneyland Park.

The Studios for us on this visit had been rather disappointing; I'm hoping for others visiting that we were just unlucky with our timings and that perhaps at busier times of the year this park has more to offer. There is so much potential here that I hope Disneyland Paris recognise that and continue to give this park the expansion it deserves and needs.

Arriving in Disneyland Park we headed for probably our favourite ride; Big Thunder Mountain. The wait time was 40 minutes but that was fine we were all happy to wait that long, so we joined the queue which seemed longer than on previous 40 minute waits but that didn't put us off. We'd been in the very slow moving queue about 10 minutes when both Simon and I noticed at almost the same time that we'd not seen any trains come through since joining the queue. Then I realised that the background music had stopped playing and on looking down to the entrance to the queue the cast members were turning guests away...this wasn't going to be our day! So we decided to turn around and leave the queue and as we headed away from the ride we looked back and could see that there was a train stopped on the track right at the top of one of the lift hills - oops!

By this time we needed cheering up and warming up so we popped into the Cable Car Bake Shop and had coffee, hot chocolates and muffins! 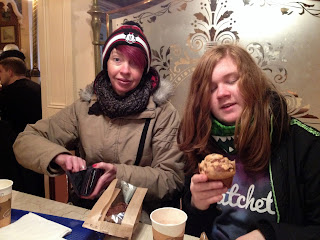 Re-charged we headed over to Buzz Lightyear Laser Blast and even this ride didn't run completely smoothly...although a couple of stops as we went round did mean we could rack up our scores...or at least try to! Molly did manage to get over 100,000 for the first time ever!!

Next we jumped onto the Disneyland Railroad at the Discoveryland station to take a tour around the park to Fantasyland. There is the lovely Grand Canyon diorama that you travel through on your way between Main Street USA and Frontierland which is a highlight of taking the train journey. Strangely we stopped at the station in Frontierland despite the station being closed and this was the view from the train...
It was such a shame to see a whole area just left to ruin...there was literally nothing there but empty buildings and paddocks. If my memory serves me right this had once been a small petting zoo/farm type area populated with animals that children could get up close and personal with. Now there is nothing except empty space - what a waste :(

Once in Fantasyland the kids rode the Mad Hatters Tea Cups, followed by a quick stop over into Adventureland to ride Pirates of the Caribbean one last time. Back into Fantasyland to ride 'it's a small world' before we headed down Main Street USA...
We did some last minute shopping as we left the park and then headed into the Disney Village in search of food and there could only be one place to go...yes it had to be Earl of Sandwich!

As we'd got a long journey ahead of us we made sure we ate well...I had Thai chicken soup followed by a Philly cheese steak sandwich and then my favourite - bread pudding!

Fully fuelled we wandered through the Disney Village to make our way to the train station. On the way we stopped at the Disney Store where me and Molly bought our first Tsum Tsum's; I opted for the classic Mickey & Minnie while Molly bought Perry the Platypus from Phineas & Ferb. We also took a stroll around the World of Disney store where I bought myself a new Mickey mug for work.

We got to the train station around 3.30pm and simply visited the Disney Express desk to fetch our luggage and whilst we had a small wait it wasn't too long and the desk operated very efficiently. Next we checked in for our Eurostar train which again was very straight forward and then found ourselves with about an hour to wait for the train. Unfortunately once through check-in there was nothing to do...no where to sit, no where to grab a coffee...nothing! Thankfully after about 35 minutes we were let through to the platform where our train was waiting so we had plenty of time to get on board and get settled ready for our journey home.

We arrived back at Ebbsfleet on time and were in our car and on our way home, in heavy rain, in no time at all.

And that was Disneyland Paris...a short visit and whilst not the same calibre as the parks in the US it did mean that I got my fix of Disney at a time that I really needed it. Will we be going back to Paris any time soon? I don't think so...from our families point of view whilst we enjoyed the trip we all agreed that we would rather save up for a trip to Walt Disney World or even Disneyland. Now this may be some way off but we will get there one day and until then I have plenty of Disney memories to keep me going!