Well here we are at day 3 of our Disney vacation.  After a busy day at the Magic Kingdom on Day 2 where should we go today??

Well the day started very early again for us..ok for some of us.  Simon decided to get up and beat the heat and go for a run.  Yes you heard me right whilst on vacation Simon got up at 6.00am for a 5 mile run.  To be fair Simon knew that he had to find some time during our vacation for running as he was scheduled to run a half marathon at the end of September (only 3 weeks after we got back from WDW).  And I had said that I was going to run around Lago Dorado at Coronado Springs...but we weren't at Coronado Springs...

From a running point of view Simon was really pleased with our change of hotel as he was able to run from the Wilderness Lodge to the Fort Wilderness Campground, around the campground and then back again, a total of just under 5 miles in about 35/40 minutes.

Once Simon was back from his run we all made our way to Roaring Forks for yet another breakfast in the sunshine.  We decided that we would try having a snack for breakfast (lovely choice of pastries and cupcakes) along with our refillable mug courtesy of the Quick Service Dining Plan which worked out really well as this left us with two quick service meals each for the remainder of the day, if we so wished.  I will do a post all about the Dining Plan at a later date.

Now I have to admit that both the children were not as quick to move this morning as Simon and I so it was 10.00am before we arrived at Disney's Hollywood Studios and consequently Toy Story Mania had a stand-by time of 85 minutes and Fastpasses were being issued for late evening.  Now as we didn't know how long we would be staying at DHS and as we have a 45 minute cut-off for stand-by lines we had to give this ride a miss but vowed that we would be back another day!

So off we went in search of rides with Star Tours our first destination...I actually can't remember how many times we rode it back to back but suffice to say with a mega short stand-by time (10 minutes...more like 5) it was more than once!
We then decided to ride the Studio Backlot Tour.  Now we've ridden this ride a lot over the years and have to confess that many years ago when movies and in particular animation was being produced at the studios it was a really popular and interesting ride.
Nowadays it has been scaled back big time but we decided to ride it purely for the Catastrophe Canyon element of the ride.  Rumours are abound that this ride maybe on it's final outing and maybe replaced by newer more exciting attractions, so we wanted to make sure we got one last ride in before it disappeared.

We then managed to sneak in a ride on The Great Movie Ride as well as Voyage of the Little Mermaid before stopping for food at one of our favourite counter service restaurants; the Backlot Express, where I decided to go simple and just have chicken nuggets...how many did I get?  I think I counted 10...suffice to say I was well and truly stuffed!  Although nuggets and fries is really just an excuse to indulge in some sauces, in particular the honey & mustard sauce that we just don't seem to get over here in the UK.
The afternoon saw us having a wander around the studios with a number of visits to various shops...scoping out the merchandise on offer so that I could make some informed shopping decisions later in the vacation! We took a little breather early afternoon to partake of a frozen lemonade on Sunset Boulevard whilst watching some of the 'Citizens of Hollywood' street performers hamming it up three stooges style.
The kids then decided that as we'd not been able to ride Big Thunder Mountain yesterday (it had been down for most of the day) they wanted to see if we could ride it today.  So off we set for the Magic Kingdom. As the bus took us to the Transportation & Ticket Centre (TTC) we decided to take the ferry over the Seven Seas Lagoon to get us there...
As we arrived the 3 O'Clock parade was just in progress along with a short downpour. Now this is where we started to have some unusual experiences!!

Firstly we decided that it was raining enough to get our waterproofs on, and being British we always come prepared.  So we delved into our bags to get out said waterproofs but in doing so Ethan managed to pull his out of the bag with such force that he hit me in the eye!  And boy did it hurt, Simon noticed that my cheek was starting to turn red so we quickly bought an ice cold bottle of water that I then held to my face hoping that any swelling and potential black eyeness could be avoided.  So whilst I recovered we headed for the Country Bear Jamboree, another one of my favourties :)

After I'd recovered we headed over to Big Thunder Mountain...and yet another incident involving our eldest, who it should be pointed out is much taller and slightly heavier than Simon!  So off on the wildest ride in the West we went having a fantastic time until I heard Simon yell out...Ethan had slid sideways into him with full force causing Simon to crash into the side of the ride vehicle.  We got off the ride and it was Simon's turn to be in pain...our Ethan was not having a good afternoon!  Thankfully after a short walk Simon began to feel better and so we headed off into Fantasyland in search of food.

We settled on Columbia Harbour House for something to eat and this is where yet another incident occured; thankfully though this time it had nothing to do with Ethan!  I had ordered our food and was waiting patiently in the queue when a woman seemingly barged her way through and nearly knocked me off my feet.  I turned round instinctively to see what was happening and saw the lady slump to the floor.  It transpired that the woman was newly pregnant and was struggling with very bad morning sickness; the Disney staff were brilliant and they swarmed round her to make sure she was OK.  A friend of the lady was just in front of me in the queue so whilst she helped her friend I entertained her children (like being at work!!), the staff then quickly ushered all of their group into a roped off area and sorted all their food for them.  This just epitomises that nothing is a problem when in WDW everything is manageable and no-one is left to feel unwanted or a problem.

After we had had our food the evening was drawing in and four very tired people decided to make our way out of the park and back to the hotel, so whilst we stood waiting for our boat we watched the Electrical Water Pageant make it's way across Seven Seas Lagoon in front of the Grand Floridian Resort. 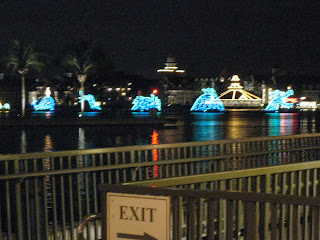