Over the last couple of years I have taken a step into the world of cosplay, more specifically the world of Star Wars cosplay!

This all came about when we were deciding what to do to celebrate Simon's 'birthday of a significant number' a few years ago. It was July/August 2015 a year before said birthday and the conversation turned to what Simon would like to do to mark the occasion and I mentioned that there was this 'Star Wars Celebration thing' in London that might be worth a look.

So we decided to book tickets for the three day event...and then a few days later came the infamous words from Simon 'well if we're going it'd be rubbish walking around in jeans and t-shirt...how about going in costume?' My response was along the lines of 'well I'm not wearing Princess Leia's brass bikini!!'

And the rest as they say is history...check out these previous posts to see what we got up to!
Star Wars Celebration
Black Thread and a Heat Gun
The Force is Strong
Looking Ahead

Since Celebration in 2016 we have joined two more costuming groups; Joker Squad and East Midlands Garrison. We have been able to troop at Legoland in Windsor in both 2017 and 2018 as part of their annual Star Wars Weekend to help raise money for a children's hospice along with lots of other conventions and events. We even turned up in costume at the pre-school I manage just before we finished for this years Summer break!

We have continued to troop as Mandalorians and Simon has been keen to keep our kits functional and upgraded. He has made special 3D printed parts to house Go-Pro cameras, updated parts as they've shown wear and tear, upgraded belt pouches and even as I type he has been upgrading the holsters for my guns!!

Simon's skill-set over the last couple of years has grown and grown; everything from 3D printing to moulding and cold casting aluminium helmets to just recently mastering leather-work. And he is loving every minute of it; he just loves the challenge of figuring something out and taking it from an idea in his head to a fully fledged and working piece of costuming. Any chance he gets to 'make something' he jumps at and nothing seems to phase him.

As we have trooped with new costuming groups whose ranks include a multitude of Star Wars characters I began to think about the possibility of taking on another costume and this time one where I didn't have to wear a helmet. As much as I love my Mandalorian costume I do miss the ability to interact with people face to face. So between Simon and I we began to muse about what to do.

As it was Simon and I are both great fans of the animated series 'Star Wars Rebels' and in the series there is an Imperial Officer called Governor Arihnda Pryce. 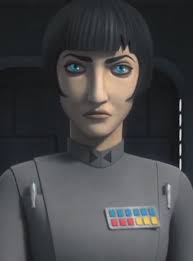 This looked the perfect character for me to have a go at; I could be a specific character that no-one in our costuming groups was currently doing and one that would be recognised by devoted Star Wars fans.

So where to start? Now the great thing about the Star Wars world of costuming is that there are numerous groups out there offering advice and detailed information. One such place is the 501st Garrison who have a data bank of costumes containing detailed information about colours, styles, accessories in fact everything to do with a specific character. By following their data bank guidelines I knew that the costume we created would not only be correct but would 'pass' any costuming group requirements. The ethos of all costuming groups is to ensure that the costumes representing them are made to the highest quality and are as screen accurate as possible. The 501st data bank has a great set of instructions for lots of characters, Governor Pryce included, so we decided to use those as our guide.

The first thing was to source the uniform. Now neither Simon or I are seamstresses, we both dabble with material and the sewing machine but do not have the skills to construct a two-piece uniform from scratch. So off to the internet we went! We used a site called cosplaysky.co.uk who stock a multitude of movie costumes that are of a high quality but that can also be made to measure. So we found the correct Imperial Officer uniform, input my measurements and waited. A couple of weeks later and my uniform arrived, then we could start the serious business of making it resemble Governor Pryce.

First thing we tackled was the belt; we found one online and dutifully ordered it but when it arrived we realised that the buckle was not quite correct. The standard Imperial Officer belt is not the same as the one that Governor Pryce wears. In steps Simon with his 3D printing and crafting skills. He was able to produce the correct detail, attach to the buckle and then adjust the belt to match the characters.
Simon was able to 3D print the centre code disk and from that he then made a cold cast aluminium version. This was then cleaned and polished and attached to the buckle which was in turn re-affixed to the belt so that a single rivet was visible to the left of the buckle.

Simon also used his 3D printing skills when it came to the 'code cylinders' that sit in the pockets of the jacket. Once the 3D model had been printed Simon was again able to cold cast in aluminium the two that I needed.
I also needed the correct 'rank bar' to attach to my jacket. Now luckily for us we happen to know someone through our Joker Squad family who makes these. So the lovely Chris Smith was able to come up with this for me; 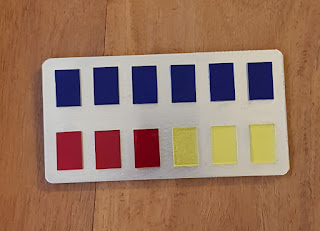 The next piece of the uniform required a little sewing. This was for the collar insignia; cut from some black fabric Simon was then able to create a seam around the edge using the sewing machine which gave them a 'sew-on badge' effect. I was then able to sew them onto the collar by hand (with a little help from 'wonder-web' to keep them in place). 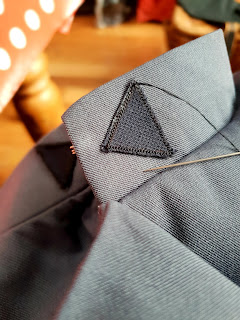 That just left gloves, boots, hair and make-up to sort. Gloves and the wig were an easy on-line purchase. 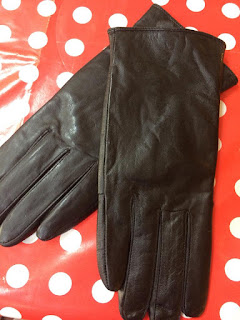 Boots were a little more tricky as the first pair we tried were not as we hoped and had a seam running up the front which we didn't want. So back to the internet and we purchased a pair of riding boots which look so much better, although they do require a bit of wearing in!!
So then it was a case of enlisting help from my good friend Jo who was able to cut the wig to match the character and then it was left to me to have a play around with the make-up!

So with all this done we can now see the final results! Me as Governor Arihnda Pryce... 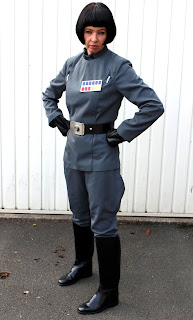 ...right best get out there and do some trooping!

Posted by DisneyJayne at 17:23 No comments: