So lets start at the very beginning...after all it's a very good place to start!

Getting to Disneyland Paris for us was split over two days. From where we are based in the UK we had around a 3 hour drive to the train station that would ultimately get us to Disneyland Paris. And because the train left first thing in the morning we decided to make the three hour car journey the day before and stay overnight in a cheap hotel.

So off we set on a clear, bright Sunday afternoon.
We managed a stop half way there for something to eat and I was pleasantly surprised at the healthy option I was able to find for myself...a nice BBQ chicken salad...the kids of course stuck to McDonalds!! 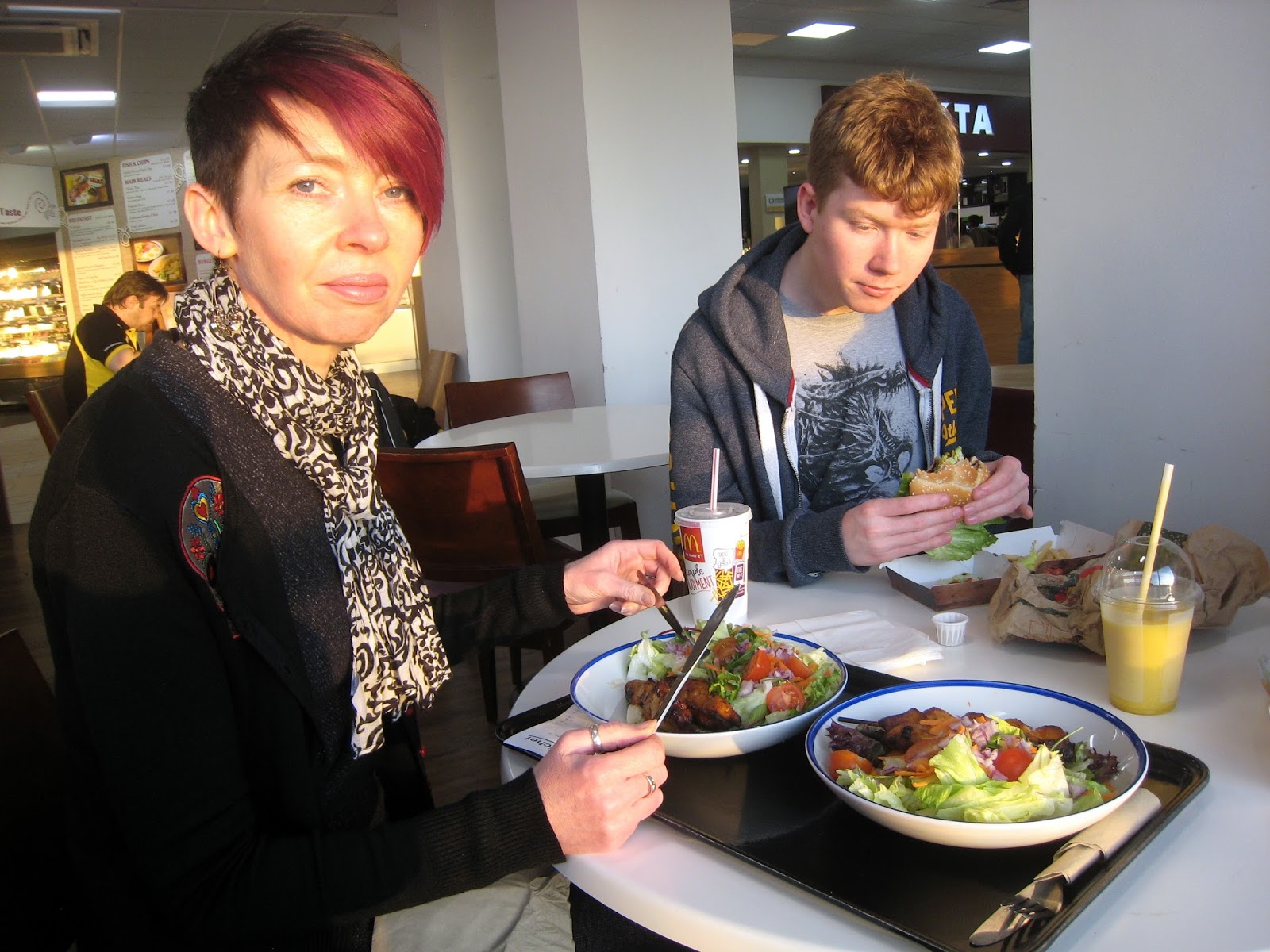 After our re-fuelling stop we carried on our way and decided to follow the lovely lady on our 'sat nav' who apparently decided that the most obvious route was not the best route! This resulted in a drive through the centre of London at night...something we have never done before...and probably won't do again! Although it was a rather unexpected route to take we all quite enjoyed the detour and it made the start to the vacation rather memorable!
A little later than we had planned we arrived at our overnight hotel;
The next morning we were up bright and early ready to head over to Ebbsfleet International rail station.
Arriving at the station was a breeze as I had pre-paid our car parking (saved us a whole £1 as prices had increased!) and this meant our car number plate was scanned and into the car park we went, followed by a few minutes walk into the station.
Now Ebbsfleet is not a big station so there is not much in the way of shops etc. But as there is no lengthy check-in like there is at airports what was there was sufficient to keep us occupied for the short wait. So we grabbed a bacon sandwich and a couple of coffees to keep us going. 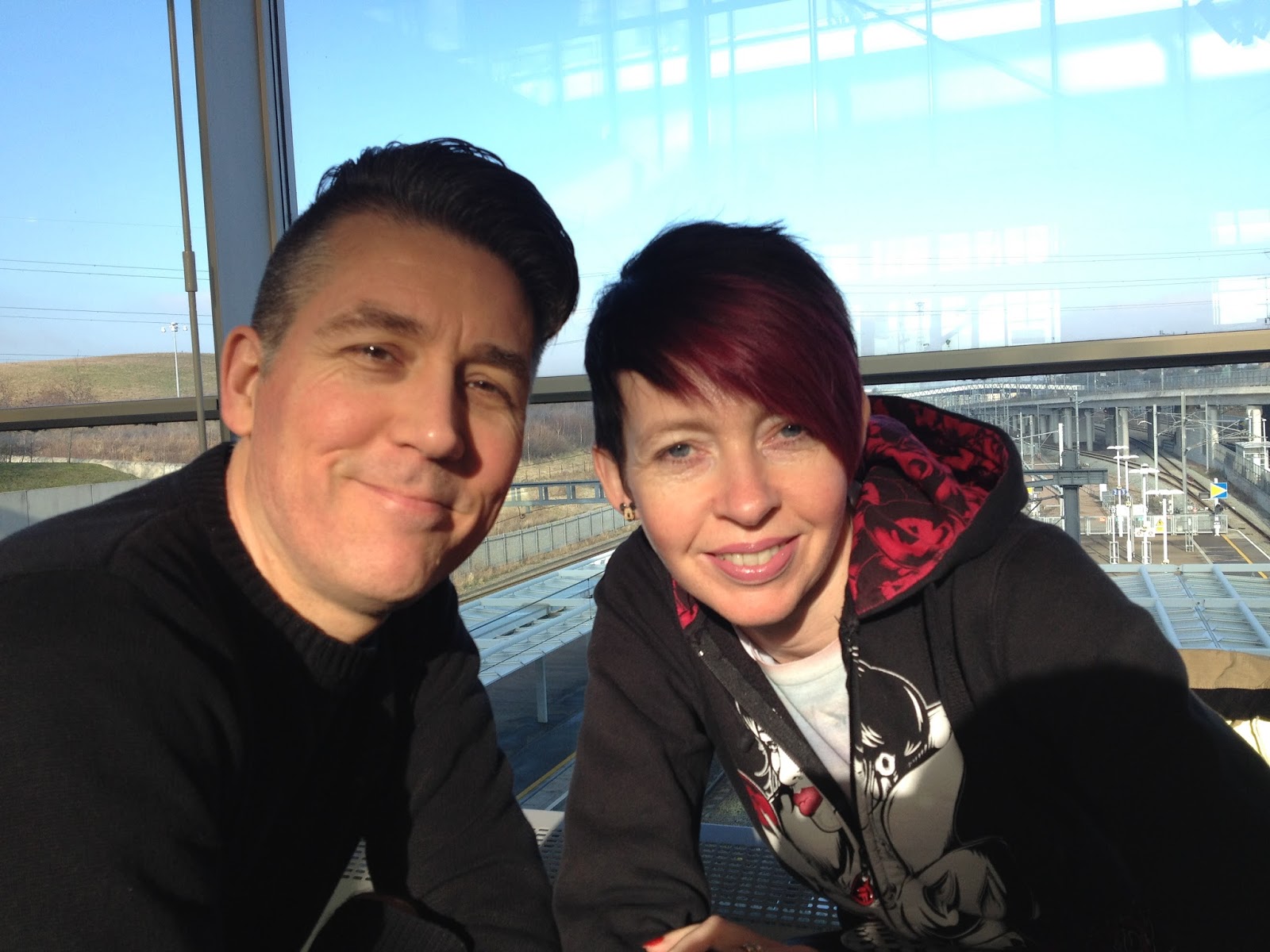 Using the Eurostar service was very efficient. We were allocated a car and seats via our tickets and this meant that we had a specific spot to wait at on the platform.  The train arrived on time, we got on, stowed our bags, found our seats and off we set on our 2 hour 20 minutes train journey 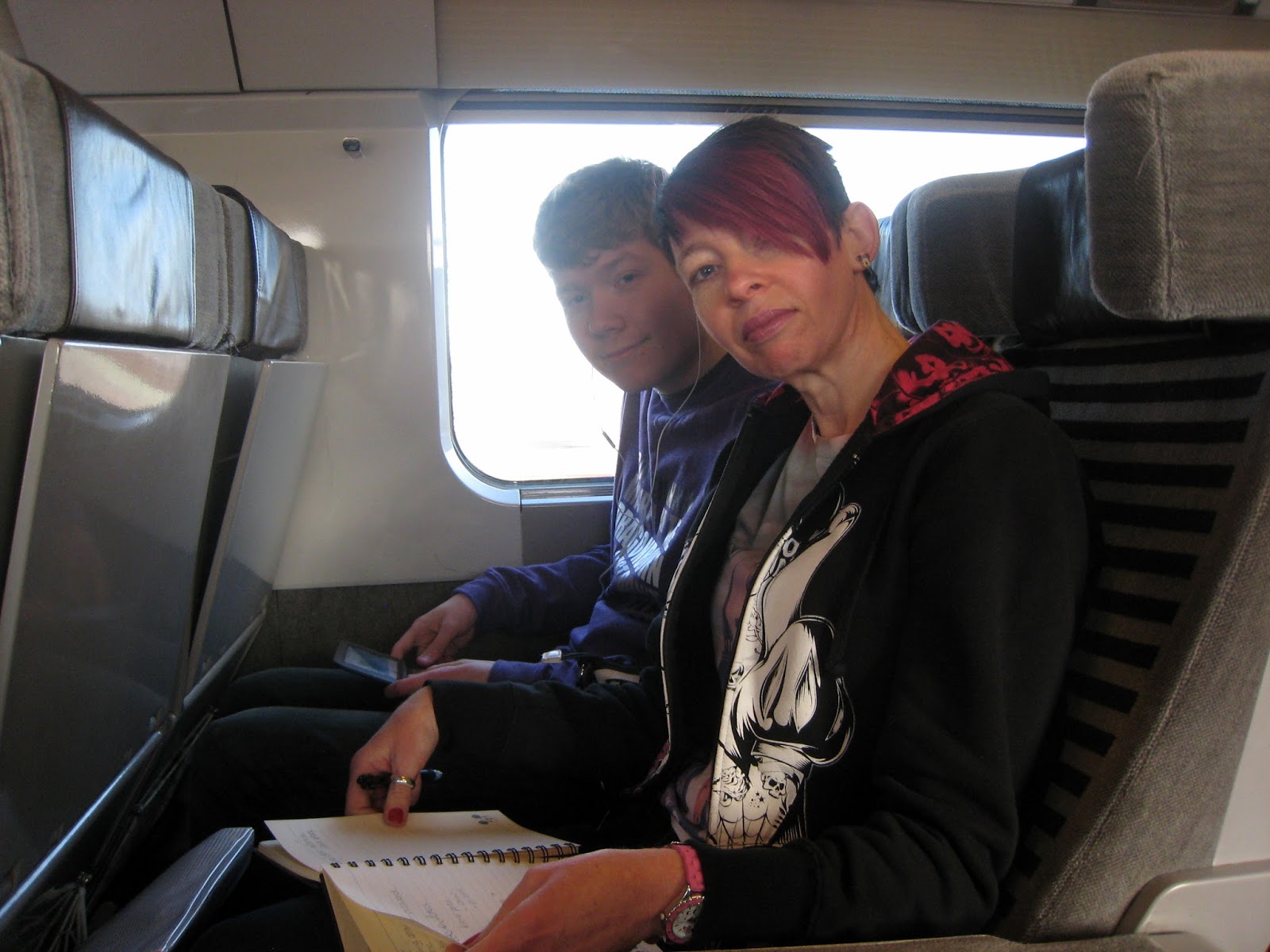 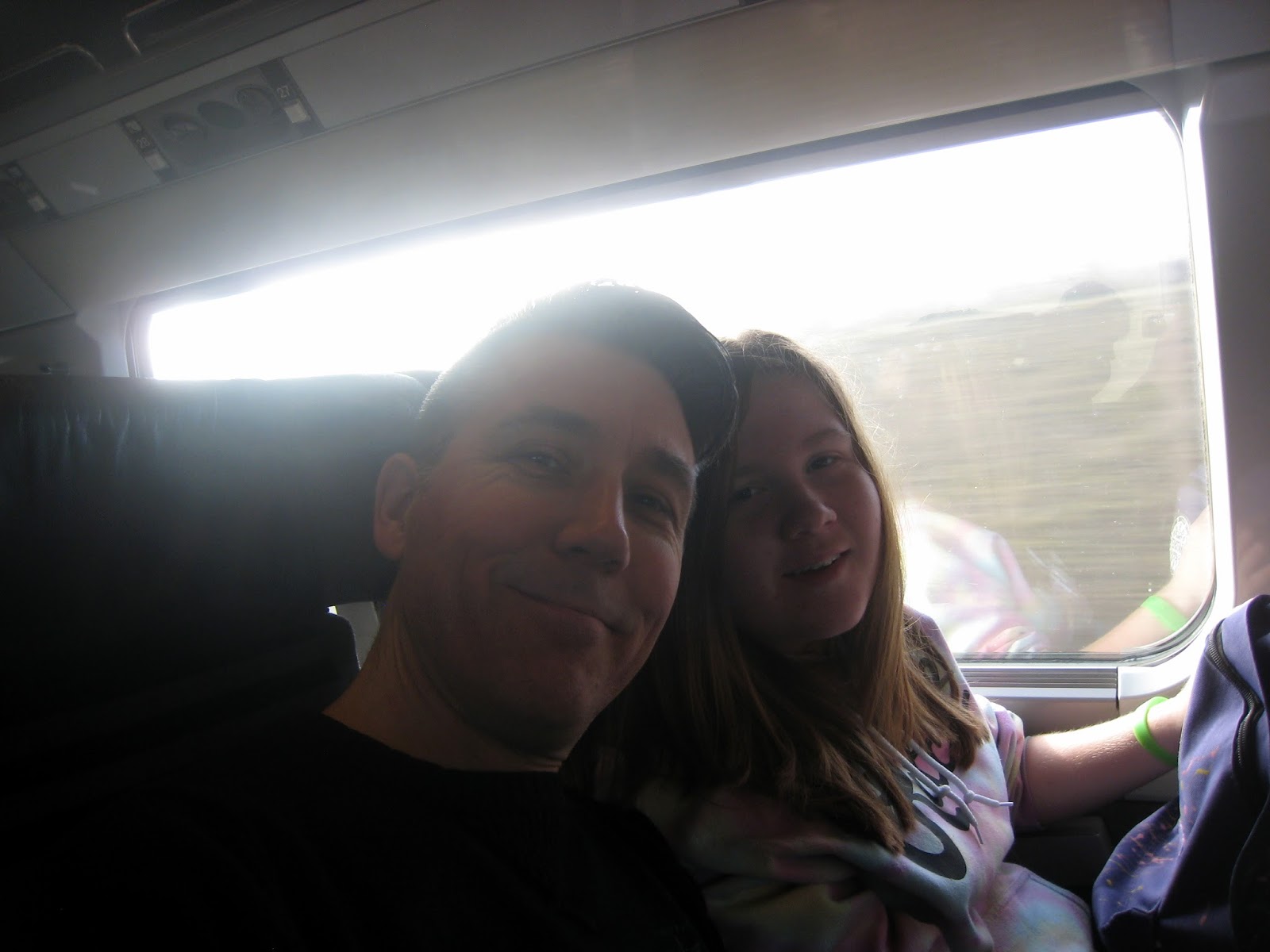 Whilst on the Eurostar we met with a Disney cast member who came along to confirm our reservation at the Sequoia Lodge as well as the procedures for when we arrived at the station at Disneyland Paris.
By travelling on the Eurostar we were able to take advantage of the Disney Express luggage service. We were given special luggage labels for our bags that identified which hotel we were staying at.
When we arrived at Disneyland Paris station we simply took our luggage to the special Disney Express desk where we were given the bottom tear off slip from the label as well as all our check-in information AND our park tickets.  This meant we were able to go off and do whatever we liked...parks, eat, shop, hotel...whatever we liked :)
And I shall tell you more about our first day in my next post...
Posted by DisneyJayne at 18:06 No comments:

Here we are a few days after the end of our short vacation to Disneyland Paris and as ever back to reality with a big bump.

For those who follow my blog you will know that the decision to continue on with our vacation was not an easy one as we had just experienced a family tragedy.  Two days before we were due to travel my mum, unexpectedly, passed away...so as I'm sure anyone can imagine the decision to go away was made with a very heavy heart.

But with the blessing of family and friends we took the vacation that we had been so looking forward to, and although there were moments along the way where we all felt the effects of recent events we managed to enjoy our time away as a family.

Returning home has been hard, as it always is after any vacation, but this time it has been doubly so as we try to come to terms with our loss.

But I have lots of information that I want to share with you about our visit to Disneyland Paris.  I kept a pretty comprehensive diary and at last count we have over 850 photos to go through plus a fair few hours of video footage.  So over the course of the coming posts I shall attempt to go through our vacation; the ups and the downs, the good and the not so good and try to give my own personal view about Disneyland Paris.

I look forward to sharing with you all my experiences. 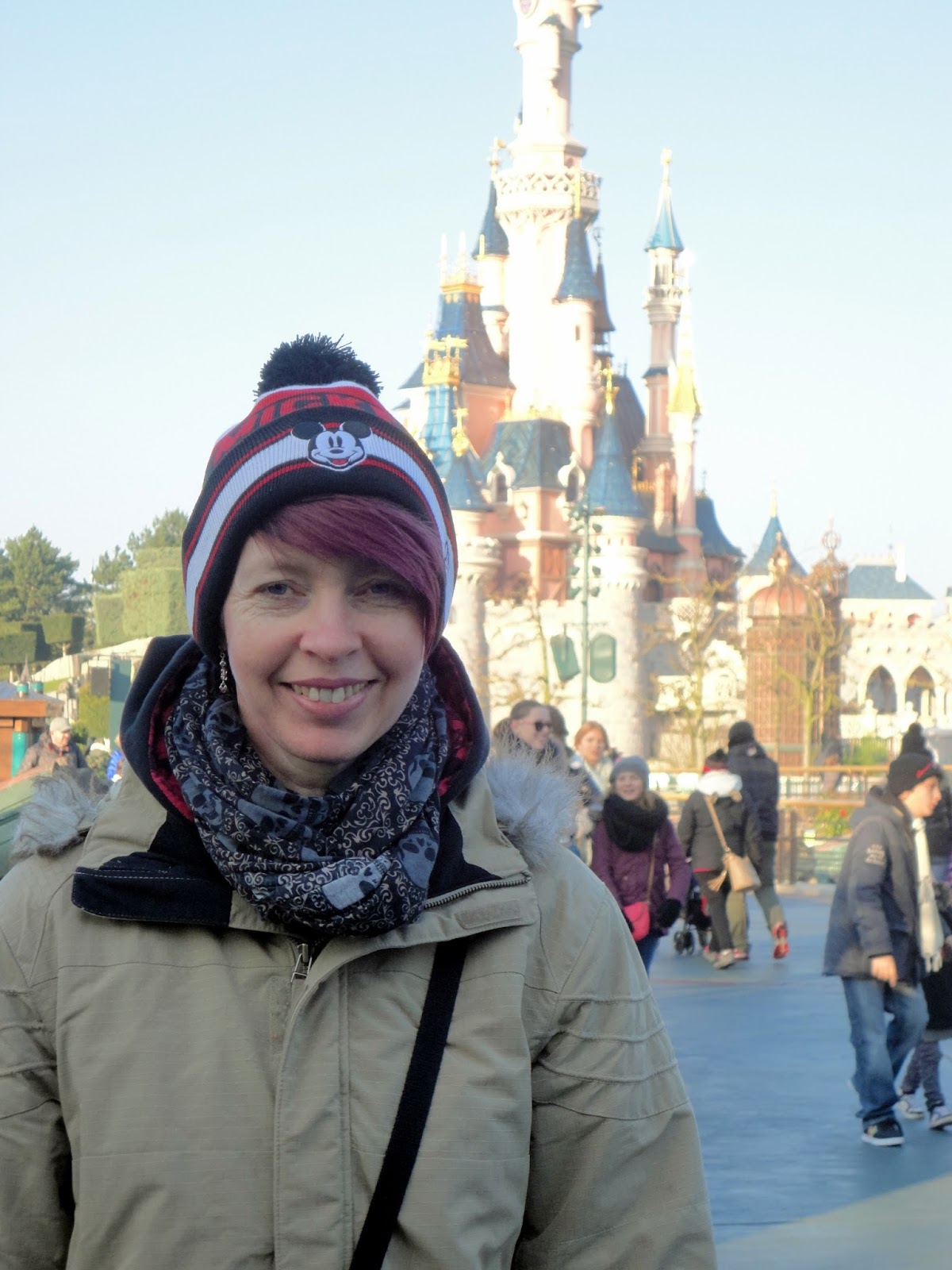 Posted by DisneyJayne at 21:34 No comments:

So here we are about to begin our travels to Disneyland Paris.

This vacation has felt like it's been a long time coming, although it was only booked about five months ago, but the run-up to it has been tempered with a series of unfortunate events.  Even the last couple of days has seen a personal family tragedy that has made us re-look at our plans to decide whether actually going away was the best thing to be doing.

Having spoken with family and amongst ourselves we have decided that the best thing (and probably the right thing) to do is to continue on with our plans.  We have some emotional times ahead of us, but I know that as a family we will pull together and come through the other side.  And perhaps the injection of a little Disney along the way will help ease the pain that we are all feeling at the moment.

So today we jump in the car and travel to our overnight destination, so that we can be up bright and early to take the Eurostar direct to the doors of Disneyland Paris tomorrow.

During our visit I shall be taking lots of photos and notes. I shall have both Simon and Molly taking video too. So when I return I shall be able to do a series of posts all about our adventures.  In the meantime please follow me on Twitter @JaynePhipps as I shall try and keep in touch direct from the parks.

See you on the other side :)
Posted by DisneyJayne at 14:00 No comments:

Well it's not long to go now...one more day of work then it's a day of packing and getting ready before the travelling begins.

Through the Disney on-line community I have been fortunate to make lots of new friends one of whom has just returned from a visit to Disneyland Paris and was kind enough to think of me and send me through a little package...

A few park maps, a note written on Disneyland Hotel note paper (how geeky am I that I think this is soooo cool?!) and a few sweeties... 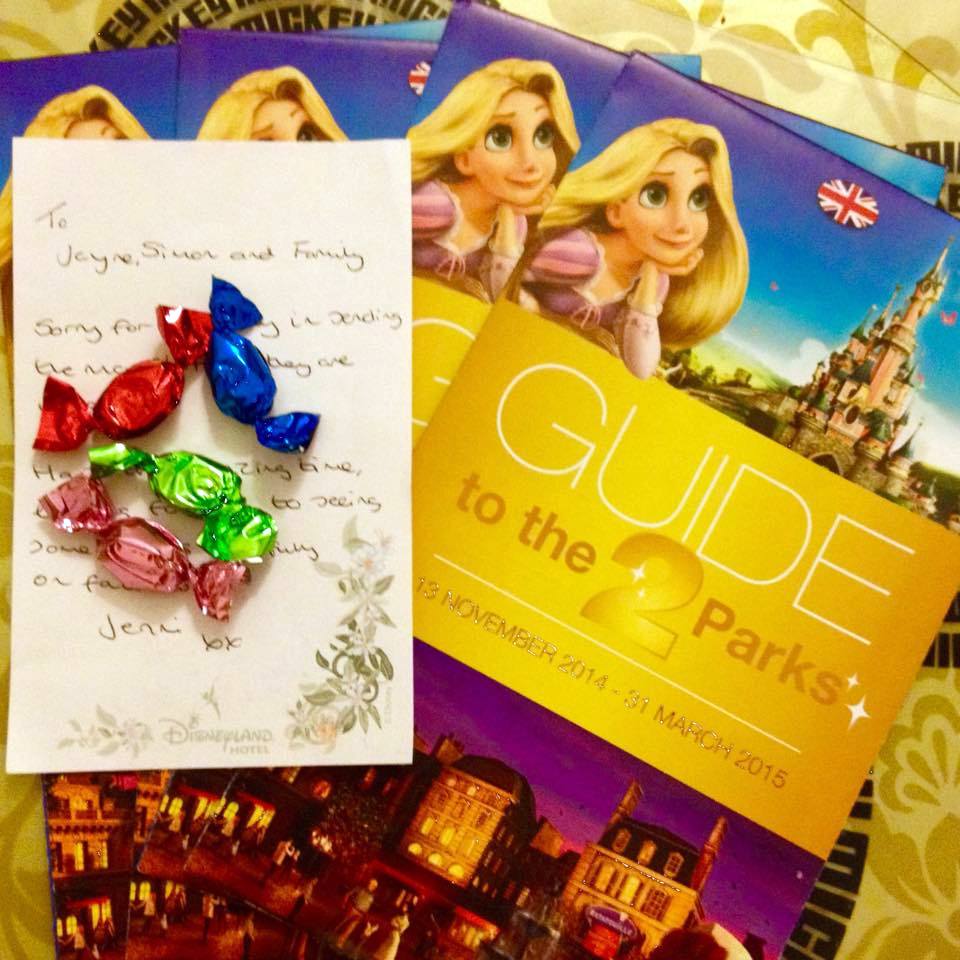 The great thing is that looking at the map has brought back a lot of memories about the layout of the parks and I can now see (and appreciate) where the changes have been made over at Walt Disney Studios since our last visit in 2006.

My daughter was chatting yesterday and counting up the times we'd been to 'Disney', she knew that I'd been to Walt Disney World eight times and that she'd been four times and that we'd all visited Disneyland just the once but when it came to Paris she struggled. She said 'well I know I've only been once' to which I could correct her and tell her she's actually been twice before...although she was only about 18 months the first time she went.  So this picture is just for Molly to prove she has been more than once...
I think I'm going to get the old photo albums out now and have a look through (yes an actual album as this photo was back in 2002 before we'd swapped over completely to digital!).

So when we go in a few days time it will actually be our sixth visit (but Molly's third!).
Posted by DisneyJayne at 20:41 No comments:

So it's getting closer...we only have a week to go and we'll be on our way to Disneyland Paris...it's getting very real now, very exciting and very much needed.

It's funny being a Disney fan I always manage to keep Disney in my life on a daily basis, whether it's following the on-line community on Twitter and Facebook or perhaps chatting with podcast co-host Michelle or looking back over old photos but whatever it maybe Disney is always there. And all that helps when you know that the length of time between trips is going to be much longer than you'd prefer! But now as we edge closer and closer to our trip I realise just how much I miss not going to a Disney resort and just how much more special that makes this and any trip.

The last few weeks have been a bit of a tough time with lots of things not going to plan but everything seems to be sorting itself out now which makes this trip feel even more valuable. It will be time that we get to spend away from the day-to-day life things and time that we'll be able to spend as a family with non of the usual distractions.

My euro's arrived yesterday and I even found some coins that I had saved from our last trip in 2006! I had a sudden, and irrational, panic over passports thinking that perhaps they were out of date, but thankfully I was completely wrong, in fact they are valid for ages yet! I have been nagging everyone to make sure that they know what clothes they want to take so that I can make sure everything is washed and ironed. I don't want the dreaded 'mum where's my favourite t-shirt?' just as I'm packing and be expected to get it washed, ironed and packed in 10 minutes!!!

So I think that we have everything in place....which must mean it's now time to make lists!  This is a must-do for any trip...I think it must be the OCD in me coming out...but I have to make lists of what we need to take with us, what we need to do before we go and what we're going to do whilst we're there of course!

So why I am sat here typing this?? Those lists won't write themselves you know!!
Posted by DisneyJayne at 21:10 No comments: